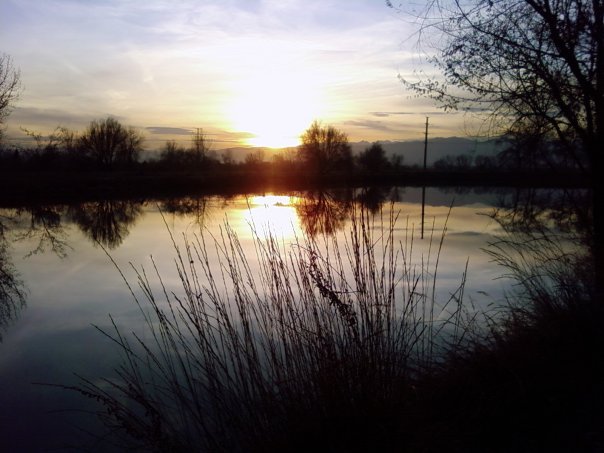 I’m still in re-entry mode, but things are slowing down a bit.  When I went to sleep last night, I swore I heard the bustle of Bourbon Street still in my head.  To my delight when I returned from the Big Easy, the fall colors had popped – mountain foliage has been in full swing, but down here, it hadn’t quite hit its peak yet.  Now we are getting just beautiful, vivid colors everywhere and the mountains are snow tipped.  It really feels like fall now.

I would have bet anything I’d already done a pot roast menu, but according to our archives, I have not.  So here is a nice slow-cooker pot roast dinner to greet you after a day of raking leaves or making your way through a corn maze.  You can substitute beef broth for the wine if you like.  The frozen pie is the family favorite of a friend of mine, I’d never even heard of it before, but she said she grew up with it.  It is easy enough to make and I love chocolate and mint together, so it was a no-brainer when she suggested it.  Everything can be put together ahead of time and be a nice end to a busy fall weekend.

Optional:  coat roast in 1 tbsp flour and brown on all sides in 2 tbsp oil in skillet before adding to slow-cooker.  Nice, but not necessary for great flavor.

Add roast & liquid to slow-cooker.  Sprinkle rosemary, dill, bay leaves, salt & pepper on top of roast.  Add in order: onion, potatoes and carrots (this keeps carrots from over cooking).  Cover & cook according to your slow-cooker directions (they vary considerably) usually 8 to 10 hours on low.

Gravy – When I use a slow-cooker, I usually cheat a bit on the gravy.  I take ½ cup of beef broth and mix with 1 tbsp of flour, stirring well.  I bring the beef juices (about 1 cup, if more, you’ll need more flour) in the slow-cooker to a boil and then stir in the flour mixture, stirring at a boil until thickened.  Then I reduce the heat back to low and let simmer for 5 minutes.  Not as tasty as a gravy started with a roux, but it does the trick and you’ll never have lumps.

Crush cookies in a blender until fine crumbs.  Mix ½ of the crumbs with melted butter, spread on the bottom of baking dish, don’t pack down.  Cut ice cream into 1-inch thick slices and layer on crust (or let melt enough to be spreadable and spread with a large spatula).  Spread chocolate, then whipped topping on top.  Sprinkle remaining cookie crumbs over top.  Freeze.

One thought on “Thursday Night Menu: Pot Roast for a Crisp Fall Day”