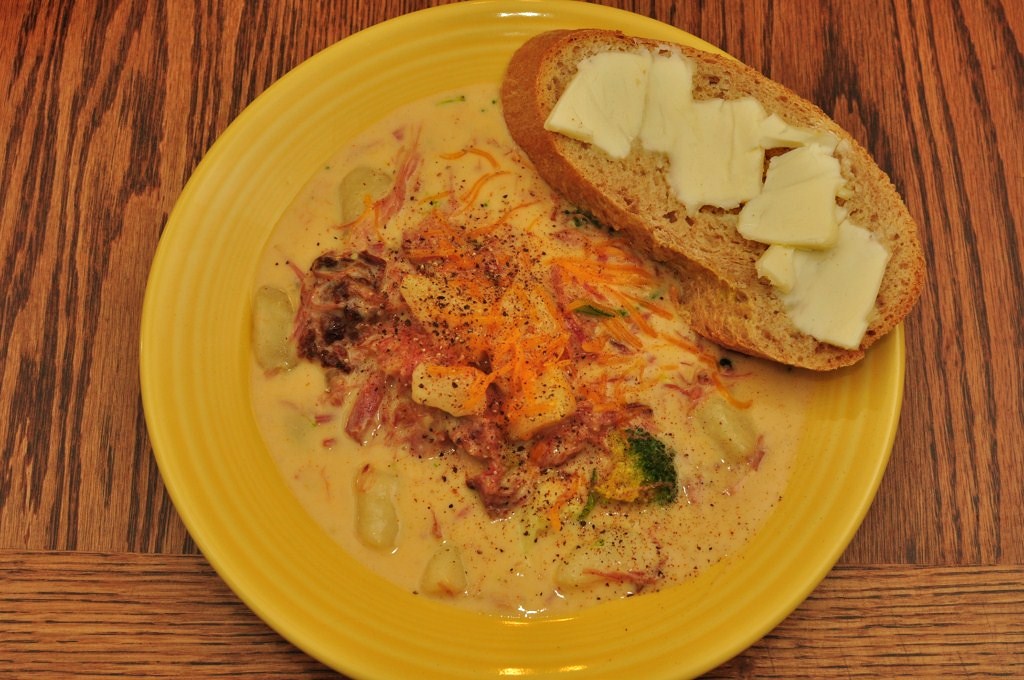 Mrs J uncovered some smoked pork shanks and neck bones in the big freezer yesterday so I boiled up a nice stock using those along with the classic mirepoix of  carrots and onions and celery.  The aroma from that pot simmering drove all of us a bit crazy.  The dogs were wandering about in a daze, bumping into walls and ignoring kitties.  I’m lucky to survive the deboning of the pork.  I did have their attention.  Annie and Buddy shared the carrots – Jack was waiting for the good stuff.

I was thinking a bean recipe would be great but Mrs J was adamant that I cook a cheesy broccoli potato soup and when she gave me the “I have spoke” look I considered the recipe selection process closed.  Google turned up plenty of variations on the basic theme, I won’t link to any of them because none of those added much to my basic plan.  I will note that one recipe called for Velveeta.  I’m far from a cheese snob and have gobbled a ton of that mixed with spicy tomatoes from a can in a nacho dip I’m sure all of you know well, but I used shredded cheddar this time.

To the strained and de-fatted stock I added four medium cubed potatoes and simmered them until they were nearly done, then added a couple of cups of broccoli and the chopped meat from the necks and hocks.  Give the broccoli a few minutes then add heavy cream and the shredded cheddar and bring back to a simmer until the cheese is melted and the broccoli is done.  The amounts of cream and cheese are not really a big deal, I used a bit more than a half pint of heavy cream and six or eight ounces of cheese in a quantity of soup that would feed six.  Salt and pepper to taste, I also added a shake of cayenne pepper.  Garnish with more  shredded cheese and serve with some nice hearty bread.