Years ago, when I was first learning to ski, I was very frustrated by the amount of time I spent on my ass and not skiing.  Someone told me that if I wasn’t spending  a lot of time picking myself up, I wasn’t really skiing. I needed to push my limits to get better. In other words, it was all good.  I find that information works for a lot of things in life.  Cooking is no exception.

This week, I spent a lot of time on my figurative ass, playing with the new crock-pot making various recipes.  There were epic failures.  The first thing I tried was a slow cooker meatloaf.  It called for a basic meatloaf recipe – I have a favorite – and then cook all day on low.  The results were not stellar.  More like steamed meatloaf.  An unappetizing color and texture.  Not the nice deep brown of a good baked loaf.  I was able to salvage it by cutting it into thin slices and frying it up for sandwiches. 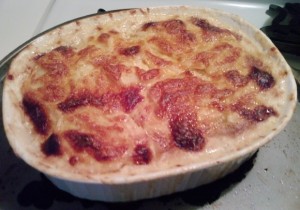 I'll stick to these scalloped potatoes from now on.

The next failure was the scalloped potatoes.  This called for a slightly modified recipe, a bit more moisture than in the baked method.  The flavor was fine, the texture was horrible.  Kind of like if you reheated some that you baked.  Rubbery and chewy.  I’m not sure how you could modify the recipe to get a creamier texture.  I’d love to hear any ideas in the comments.

The rest of the week was spent making traditional slow cooker foods – soups and a lovely pot roast.   It wasn’t a total loss.  I did learn that for a fool-proof slow cooker recipe it’s best to have a recipe that can cook, unattended, all day without risk of ruin.  Both the potatoes and the meatloaf really could not have cooked any longer than they did.  They would have turned out even worse.

So that was adventures in cooking this week.  What foods do you use your slow cooker for successfully? Anything usual that we’ve never thought of?  Hit the comments.  Next week I think our theme will be Mardi Gras, and I’m hoping you’ll come prepared to share some favorite drinks as well as Cajun food recipes.  Someone should bring the King’s cake recipe, too.

Here’s one of my favorite fool-proof slow cooker recipes:

This works best if you cook the pasta separately and either add it to the beef the last 15 minutes or serve the beef over the pasta.  This is one of those slow cooker recipes that the longer it cooks, the better it gets, usually 10 hours minimum for best flavor.