This year, the margherita pizza celebrates its 125th birthday. One of the world’s favourite foods was reputedly invented at a pizzeria nowadays known as Brandi (00 39 081 416 928;brandi.it) at Salita Sant Anna Di Palazzo 1-2 in the city’s Chiaia neighbourhood. In 1889, its pizzaiolo, Raffaele Esposito, and his wife, Maria Giovanna Brandi, were summoned to the nearby Capodimonte palace and asked to invent a pizza for the then-queen, Margherita.

I’m sure this crust is much too thick for a purist.  I started the dough yesterday with 2 cups of bread flour and then added water to equal 65% of the weight of those 2 cups.  I used a handy electronic kitchen scale to weigh the flour but I don’t remember now what that came to.  Anyway, multiplied that by .65 to get the weight of the water I wanted.  Add a scant 1/4 tsp of yeast and a teaspoon of sugar to the liquid, plus a tablespoon of olive oil and stir into the flour.   The dough was very wet so I only kneaded it a little and then plopped it into an oiled bowl and covered with plastic and a damp towel.  It was left overnight to rise.

I punched the dough down this morning and returned it to the bowl to continue proofing.  Why the fuss with weighing the water and flour?

Hydration affects the process of bread building and the nature of the final result. Generally speaking, the more water in the dough, the more open the final bread’s crumb. Bread can also be classified according to three categories based on hydration: stiff, standard or rustic.

I rolled the dough out on a floured board and transferred it to my rimmed pan for baking, brushed the top with garlic oil, and distributed the toppings.  This one got the traditional Margherita treatment with mozzarella and Roma tomatoes and went into a 500 oven until the crust and toppings got a nice color.  Add the basil after the pie comes out of the oven or it will burn to a crisp. 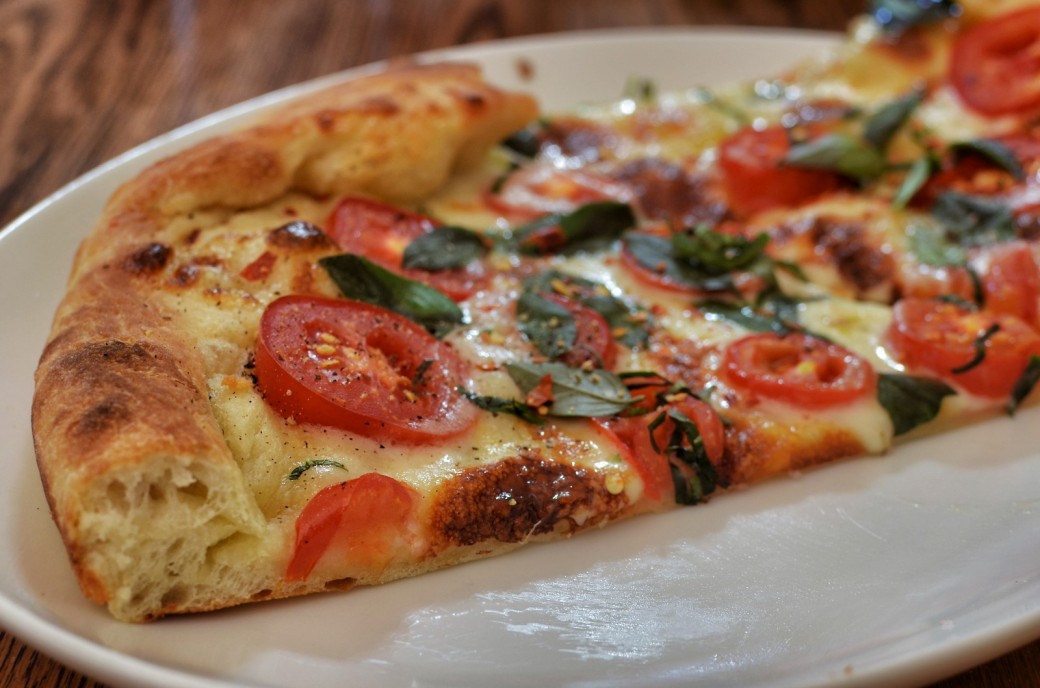 I like ground red pepper on my slices, along with fresh grated black pepper and salt.  Drizzle more of the garlic oil over it and enjoy!