Here is what I originally wrote about the rescue and forgot to cross-post here:

After a very long week away and an even longer 8 hour drive home, this happened. A neighbor spotted these two at the local playground (with pond) and they tried to follow him home. This was yesterday and he was worried. So, since my niece and I had been driving all day, we decided we could use a walk and went to see what we could see.

These two came right up to us. They were hungry, friendly and completely ill-equipped to survive on their own. I had brought cat food along (mine ate cat and dog food along with chicken feed for that well rounded diet, LOL – or just to annoy the four-footers in the family) and they took it right out of my hand.

The only thing I had to capture them with was a cooler a friend had lent me for the trip. Deciding I’d just buy her a new one, I corralled them (one in the grass, the other I had to snag from the water) and brought them home.

Their photo is now on the neighborhood lost and found website page and they are tucked away in the garage, with food, water, cilantro – a duck favorite. Bixby is beside himself with curiosity, but I don’t want to stress them, so he’s banned from the garage.

The good news, the excitement has tempered any disapproval from the dogs about my long absence. The bad news? I’m attached (I love ducks) but am in no position at the moment to add more critters to my menagerie. There may need to be an intervention.

The ducks are still here, we are evaluating the re-homing options – I want to watch them a bit longer to see if they’ll fare well in a farm setting or if they are tightly bonded to people. They were clearly someone’s pets before being dumped. They’ve held their own with the dogs and cats and enjoy human contact – at least mine, since I’m the one who feeds them and I’ve picked them up regularly. 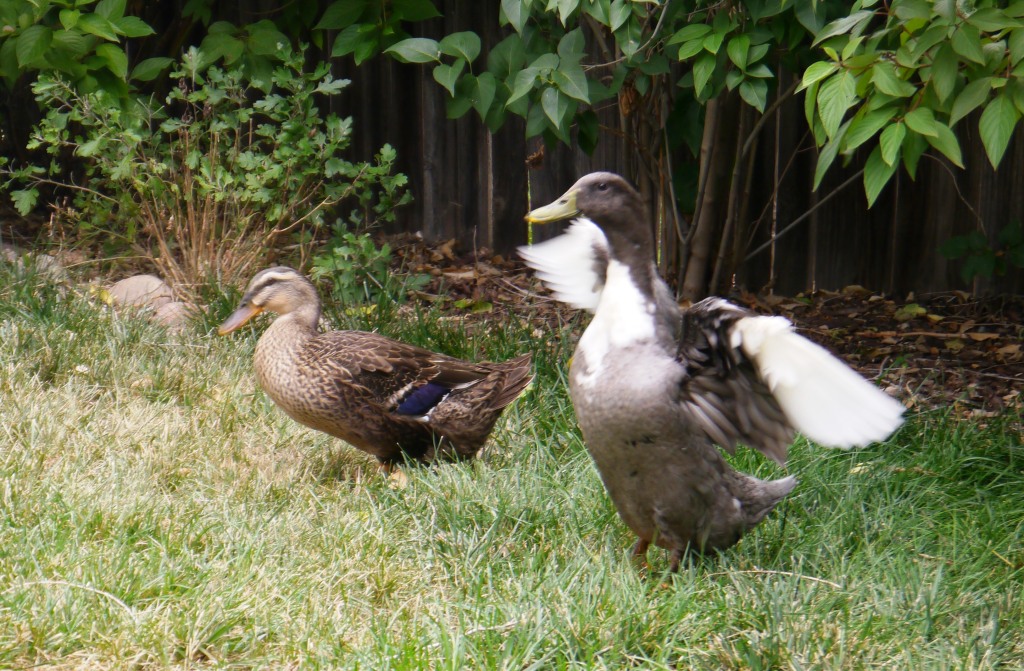 Ducks are generally free-range. While chickens seem okay with a small penned area, ducks want the entire yard. They’re a bit messy, but good at keeping weeds and bugs under control. These two are still very underweight and spend a lot of time resting under the bushes in my yard. But they are eating and drinking well and enjoying the pool (much to Bixby’s dismay, as it’s HIS pool), so I think they’ll be okay.

I’ve closed off the garden area so they be there and safe when the dogs are outside. Bailey has shown little interest in them, but Bixby wants to play with them. He loves the geese at the lake and he’s always been respectful with them. With the ducks, he hangs back and watches….and watches…but when they suddenly start quacking, he races over to them. Doing my best to discourage that, but it will take some time…or not…he may not be a dog who can be around birds.  They on the other hand stand their ground, so that’s good to know.

I’ll get video of them in the pool and post soon. Trust me, it’ll make you smile.

Menus will be up tonight.

One thought on “Ducks? What Ducks?”