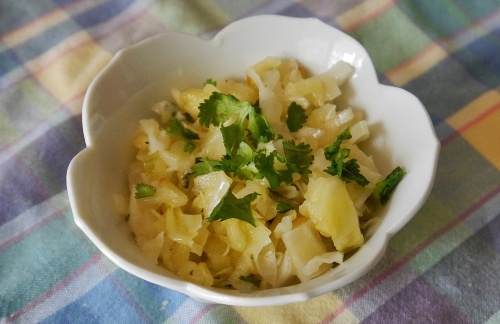 I used the electric pressure cooker for this and it was great. I marinated the pork in apple cider vinegar and adobo seasoning overnight. I browned it in the pressure cooker, than cooked on high for 45 minutes, using the liquid from the marinade and enough water to come up to about 1/2 of the pork loin.

Once it was finished, I released the pressure, shredded the pork, added about 1/2 cup of Baby Rays Sweet and Spicy BBQ sauce and turned on the slow-cooker feature and let it sit uncovered for 2 hours until company arrived.

If you don’t have time for the slow-cooker, turn up the heat and let the liquid reduce by half before adding BBQ sauce.

I saw a similar recipe when looking for cooking times for the pork. And it was a great addition to the pulled pork sandwiches.

Mix all ingredients together and let set for at least 2 hours for flavors to meld.

When I was in Paris I was on the hunt for tarts – specifically lemon tarts and strawberry tarts. Strawberries were out of season, so I had to settle for raspberry. The lemon were by far my favorite. They had a shortbread tart (the raspberry ones were pastry) that worked well with the tart lemon filling.

Combine the egg yolks, sugar, cornstarch, water, lemon juice, lemon zest and butter in the top of a double boiler set over, but not touching, boiling water. Cook, stirring, until thick and creamy, about 5 or 6 minutes.  Cool thoroughly before putting tarts together.

Okay, so all the recipes for lemon filling wanted a double-boiler.  I started with one, but after 5 minutes of stirring and not thickening, I changed over to a saucepan and whisked it for 5 minutes while it boiled and thickened and had no issues with it burning or sticking.  High altitude may have been the reason for my original troubles.  Water boils at a lower temperature here, so the double boiler may not have offered enough heat to thicken the sauce.

Cream butter and sugar until fluffy. Stir in flour and mix well, then knead for 3-5 minutes until dough forms a ball.

Press dough into mini-tart pans. Prick each with a fork . Bake for 15-20 minutes at 300°  Cool thoroughly before assembling tart.

To assemble – add lemon filling to each cooled tart. Top with whipped cream and serve with crushed raspberries.

This made a lot of tarts, so I refrigerated half of everything and I’ll be making more for dinner guests later this week.