Bog standard chicken noodle soup, kicked up a notch with a wee drip of sesame oil, a scant teaspoon of fish sauce, and a dash of Chinese Five Spice.  I mentioned yesterday in the lasagna post that I had leftover cheese sauce with spinach – I smeared a bit inside the grilled cheese sammies to go along with the provolone and American.

I usually make this with ricotta as a base for shredded mozzarella, Parmesan, and provolone but decided to go with a bechamel this time just to see how it would work.  I’ve been seeing the basic white sauce used in a few different lasagnas prepared on one of my TV cooking shows.  I made one with 4 cups of milk and stirred the cheeses into that and added the ricotta just for the hell of it.  Made a ton of cheese sauce thinking I’d make two pans but my lasagna noodle count was off so I packed one pan, slightly larger than my usual, as full as I could.  Still had leftover cheese sauce.

Freshly made lasagna, still warm from the oven, will slump all over the plate.  I let mine rest for a half hour but it still oozed all over.  Here’s a nice slice that’s firmed up overnight in the fridge.  The green is chopped spinach that went into the white sauce.  The tomato sauce has sausage in it but this would be just fine without any meat added if that’s your preference.

Even just the one pan is way too much for the two of us so I divide it like so and slide it into the big freezer so I can vacuum seal the portions for later.  They’ll keep a long time like that. 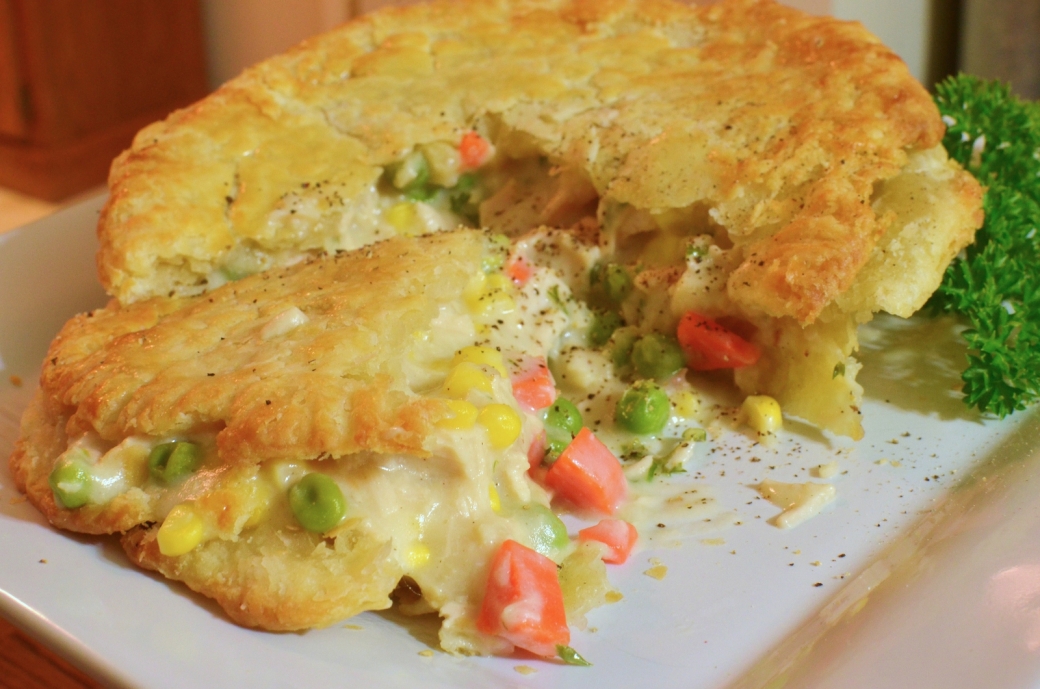 We bought a frozen turkey while at the grocery store the other day, they were on sale post holiday and the low prices made them hard to pass up.  I roasted it yesterday, and then Mrs J demolished the carcass for the meat but not before I carved out half the breast for these pies.

Mrs J swore off ready made crusts after making those pumpkin/sweet potato pies the other day.  This time she went with the Smitten Kitchen recipe.  She has used it before and we liked the results.  The SK recipe calling for vodka in lieu of water works great, too.  Alton Brown used apple jack in a similar recipe that he used for an apple pie.

The filling for these mini pies was simple enough:  Make a roux then add milk to make the classic white sauce.  The peas and corn were from frozen and I just stirred them in with the diced turkey meat, the fresh carrots needed a few minutes at a boil first.  I also stirred into the mixture a little turkey broth that was left from the last turkey we cooked at Thanksgiving.  Seasonings were minimal, just some salt and white pepper, the broth added a hint of tarragon.