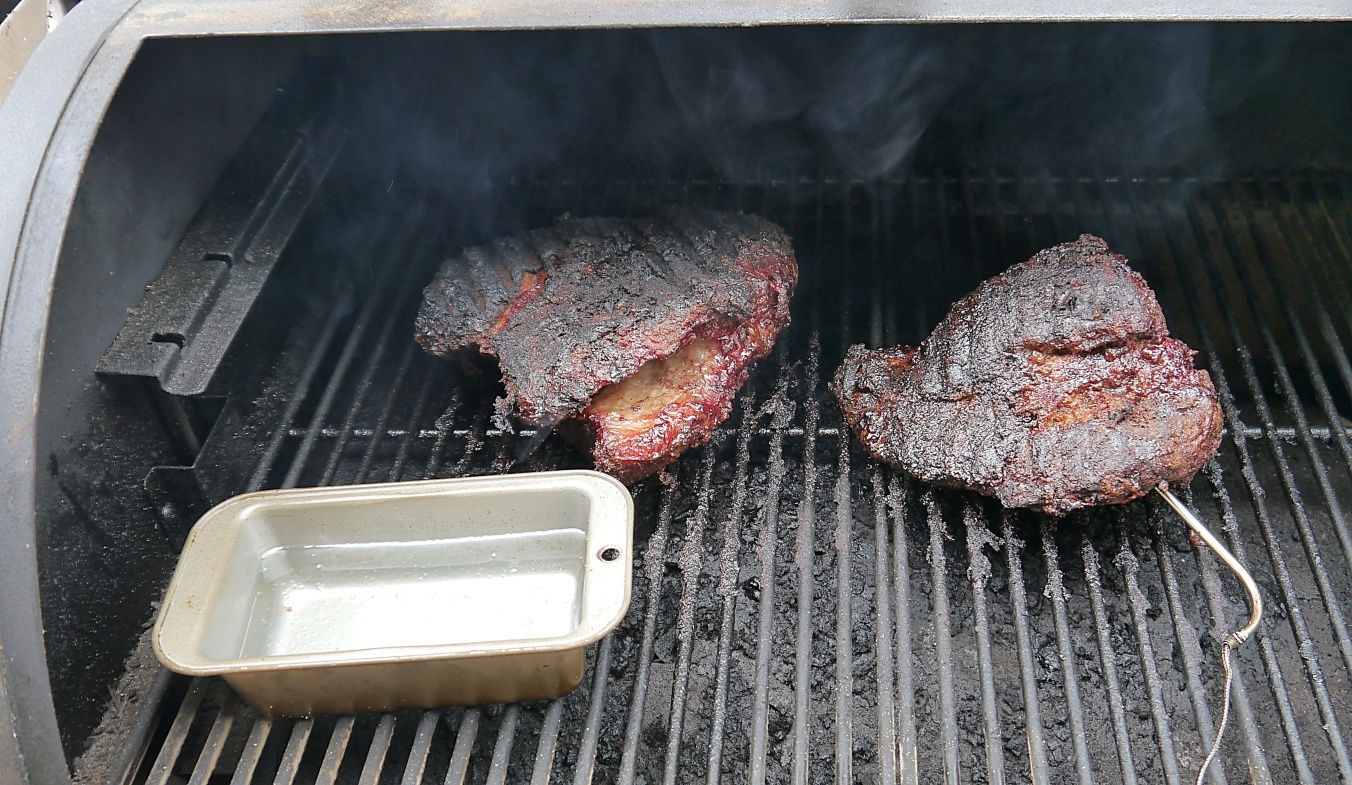 I smoked my first brisket, even though I’ve had my wood pellet grill for almost two years now. 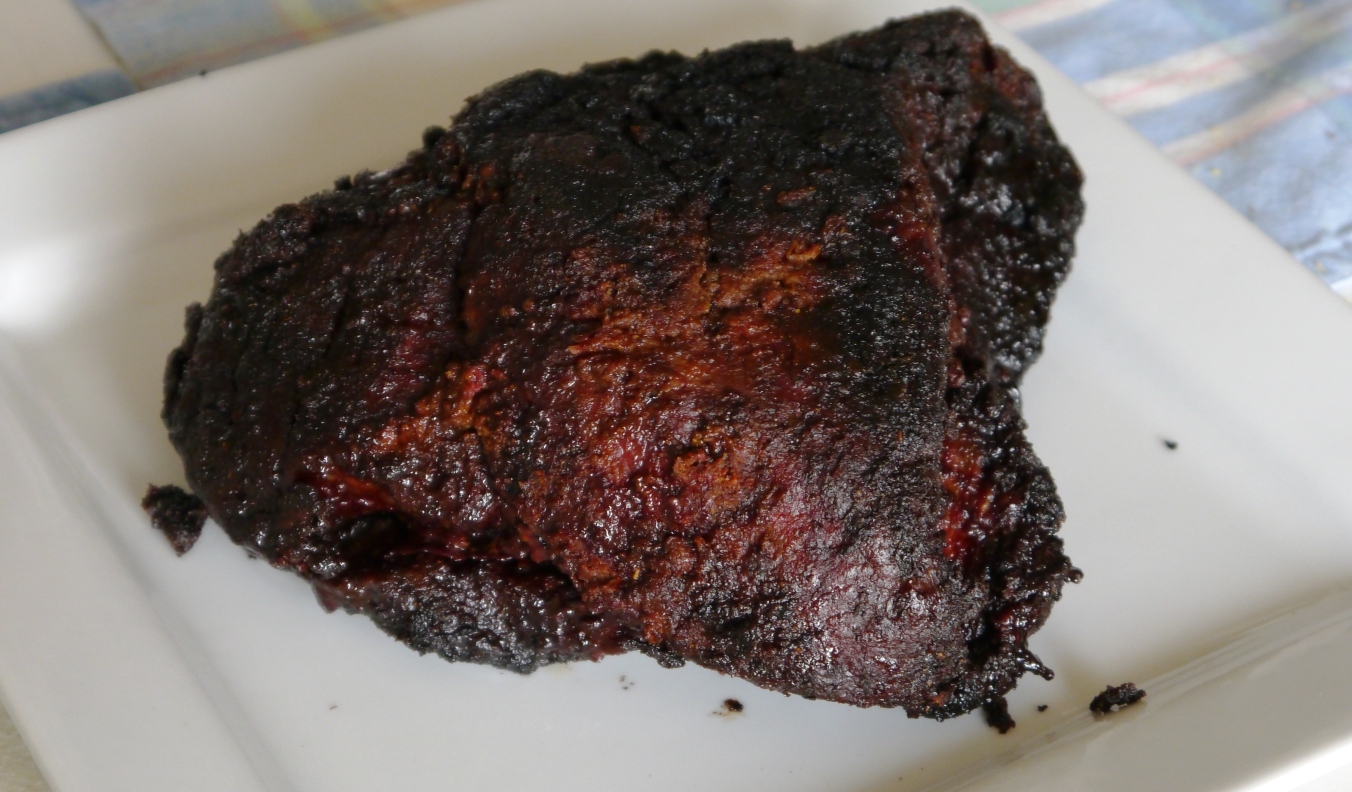 And by I, I mean my brother mostly. I made up the rub, using brown sugar, paprika, salt, pepper, garlic powder, onion powder, cayenne, hot chili, cumin and oregano.  But my brother did most of the smoking, setting the temperature and watching over it. 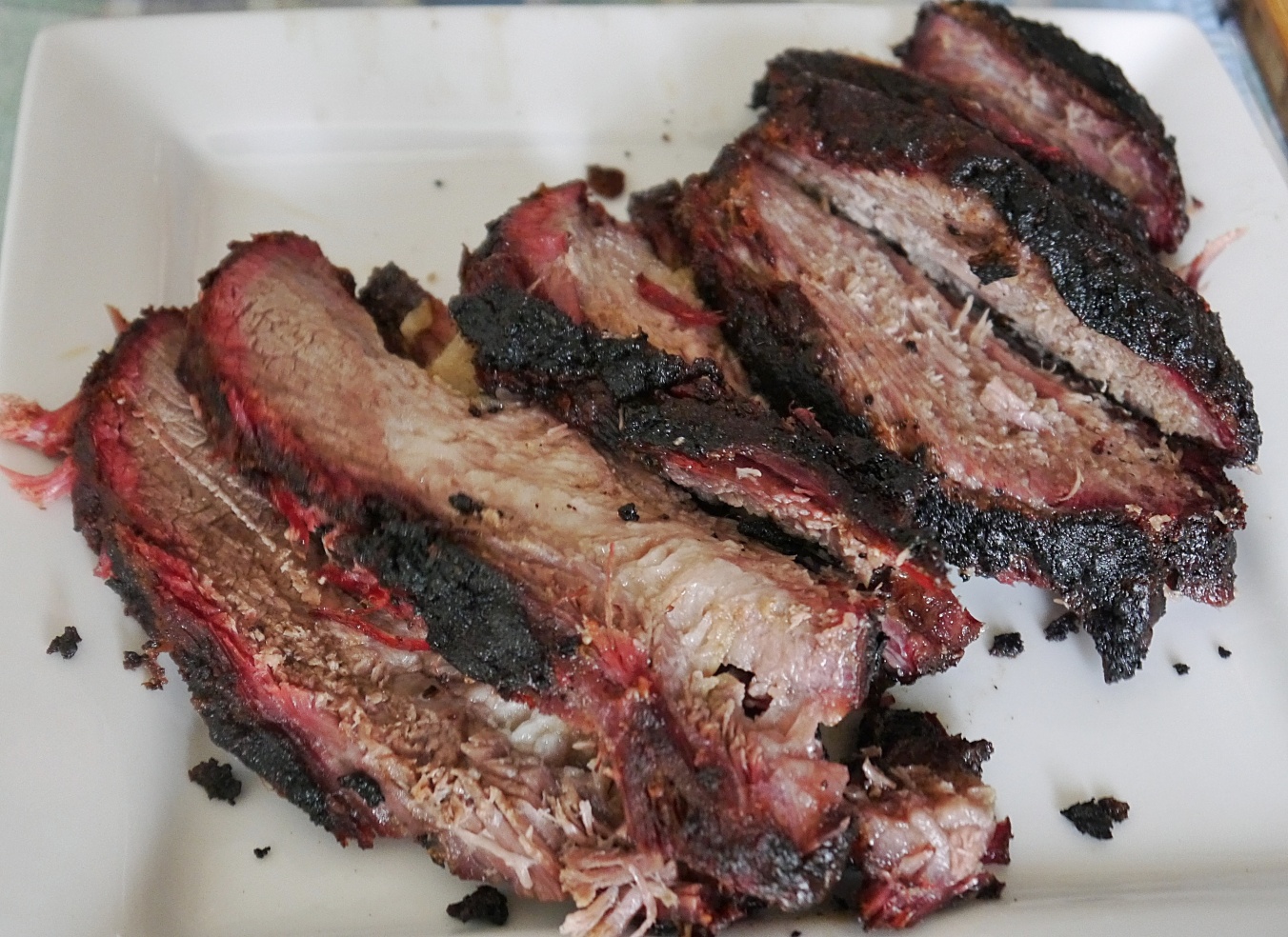 I paid close attention and asked lots of questions, so I think I could do it myself next time. 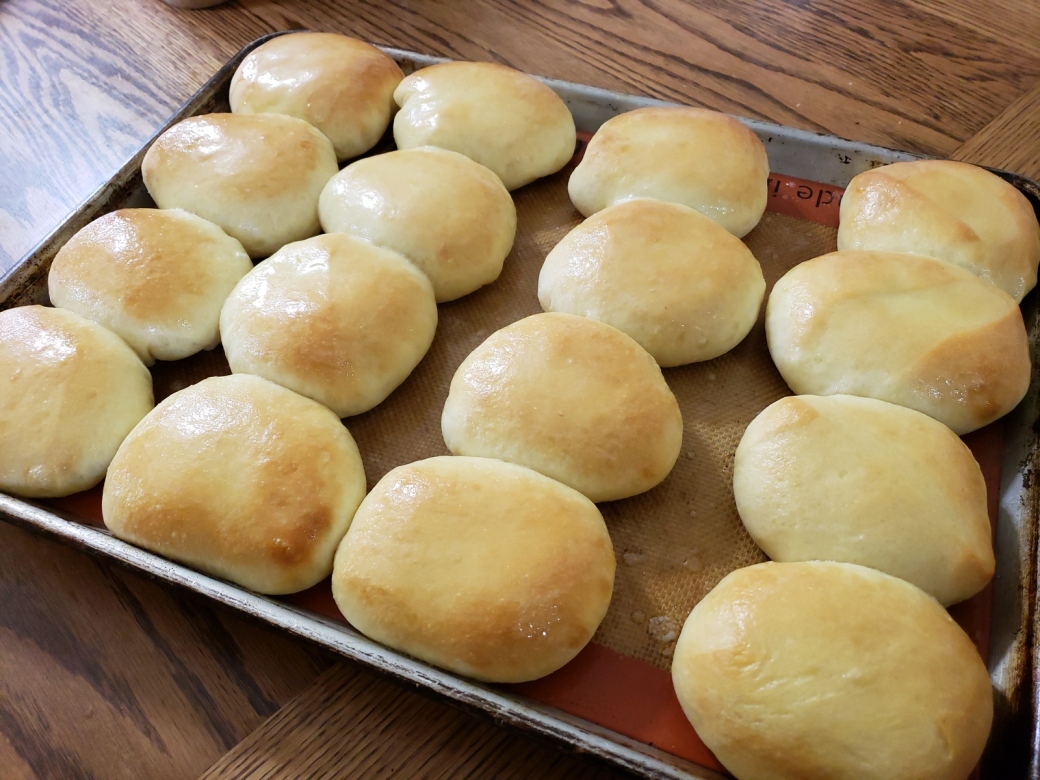 I made buns from my go-to recipe this morning, dividing the dough into 16 mostly equal pieces.  I do an okay job with the division if it ends up with 2, 4, 8, or 16.  My eye is pretty good dividing by two.  The odd numbers are more difficult.  I can divide half-loaves by 3 to end with 6 buns, and each of those by 2 to get 12.  Getting to 10 is hit and miss, cutting halfs into 5 pieces is easy enough, don’t get me wrong, but five equal pieces is another thing entirely. 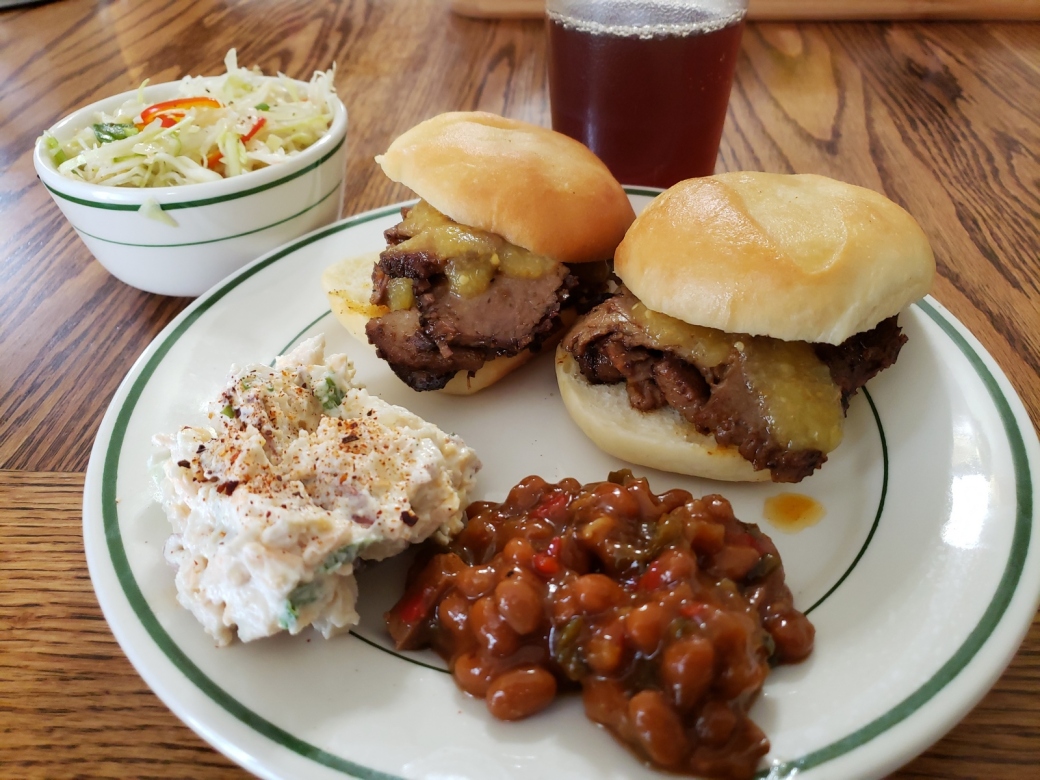 Anyway, they were not quite slider sized, but close enough.  Here they are with smoked brisket – sliced and doused with orange habanero sauce.  Yum! 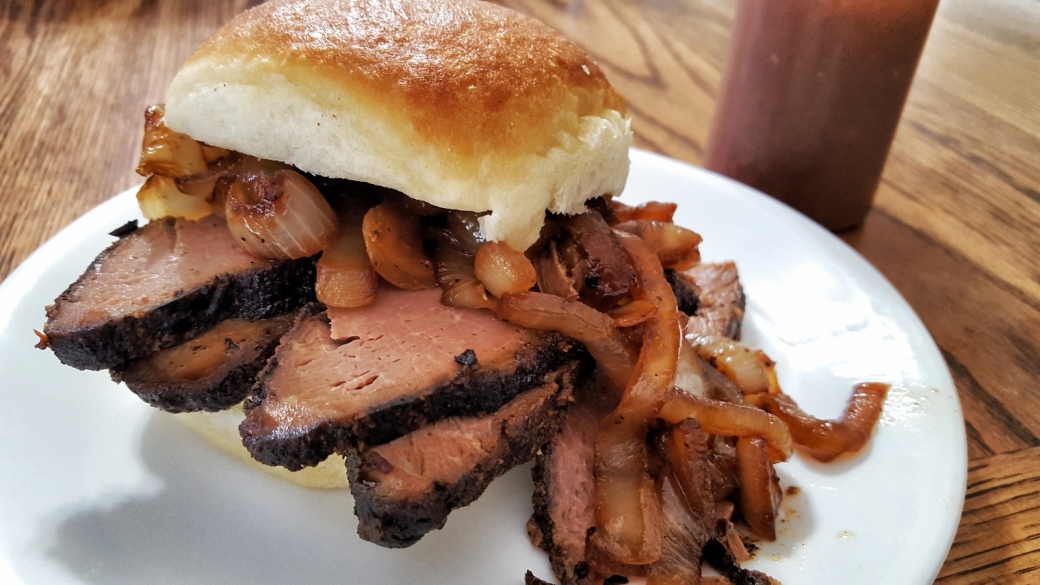 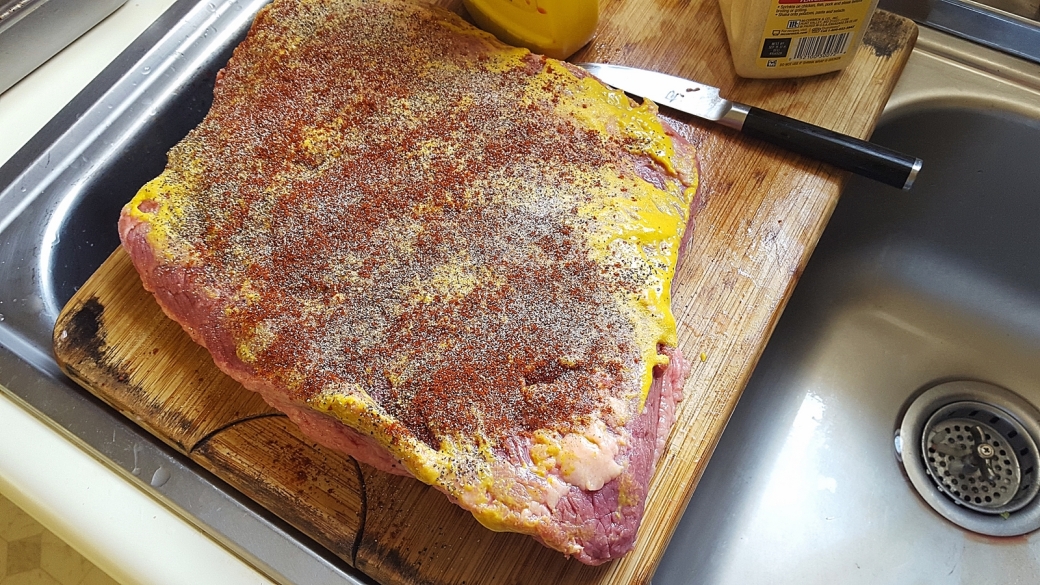 We’ve had a brisket in the big basement freezer since they sold for $3/lb. I brought it out to thaw the other day.  I was thinking I might smoke it outside in my little electric smoker but decided not.  I kind of winged the recipe, poked in a couple dozen garlic cloves, smeared it all over with mustard and sprinkled on all the various powders that looked good:  Garlic, onion, a couple of different chili powders, cumin, black pepper, and a little kosher salt.  I didn’t want to use much salt because that just ruins using the drippings for a sauce. 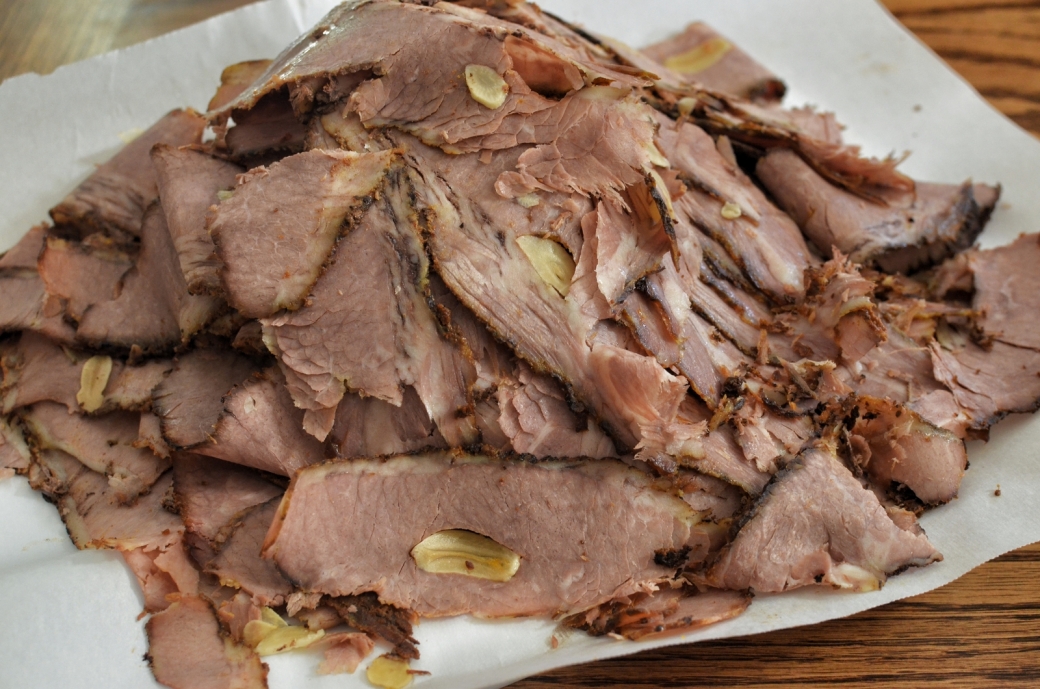 I cooked it in a covered pan at 250ish for four or five hours, letting it braise in its own juices.  I drew off the extra liquids and let it cook uncovered for a while, let it cool and then put it into the fridge to firm up for the slicer.  I sliced it very thin across the grain. 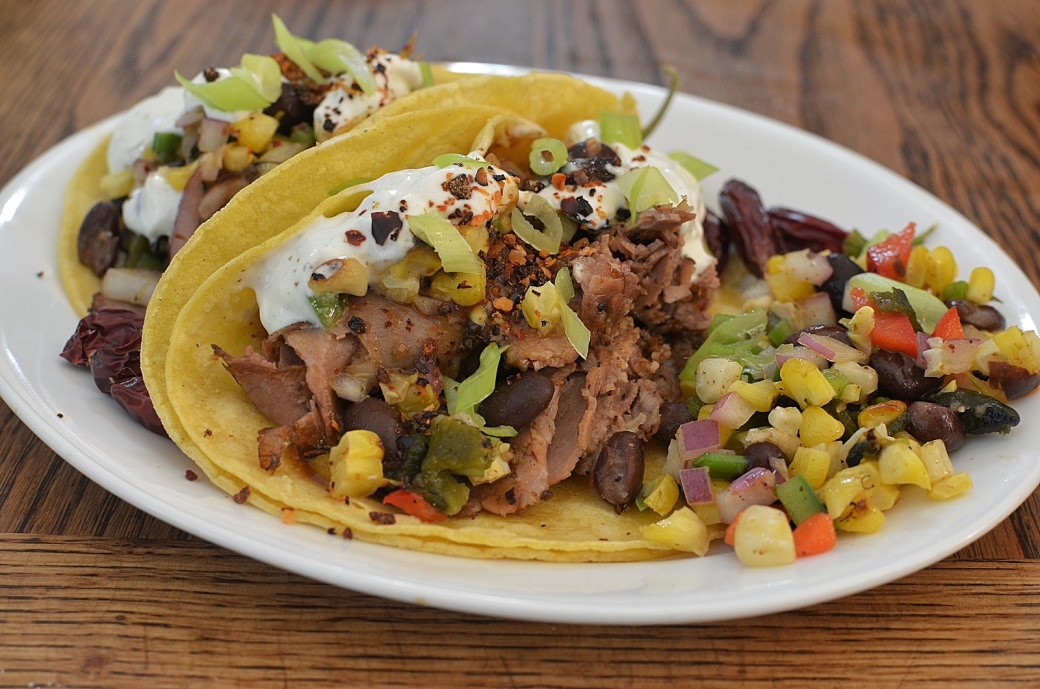 We had some for lunch today in a few tacos.  The corn salad went well with them.

Last week I found a nice, small pork roast on sale and decided it would be perfect to make a slow-cooker pulled pork. That reminded me that it would be a good idea to revisit JeffreyW’s smoking adventures with his backyard smoker. I’ve pulled a few recipes, but if you search for “smoker” on the blog, you’ll find a whole lot more of his mouth-watering pictures and recipes.

Let’s start with my slow-cooker Easy Pulled Pork, I posted two ways to make it here.

Next up, JeffreyW makes an assortment of goodies in his smoker:

Here is his recommendation for a smoker and some tasty Ribs.

My youngest brother also jumped on the Smoker band wagon and sent me photos of a great meal that included Smoked Macaroni and Cheese (link here). He didn’t include a recipe, but I think it’s safe to say, make your favorite Mac ‘n Cheese, place in an aluminum pan, cover and smoke it for about 45 minutes to an hour at 165-180 degrees.

Smoker people seem very passionate, so if you’ve got the bug, hit the comments and share your experiences and expertise. What delicious things do you have planned this weekend? Anyone getting the grill out yet?

I thawed a beef brisket and was thinking corned beef but changed my mind.  I have a fresh made pastrami on hand so I decided on a straight smoked brisket.  The procedure is much the same as with making a pastrami except you are starting with a fresh beef beef brisket rather than a corned one.  I suppose you could use the same dry rub for both but I wasn’t sure how the juniper berries in the pastrami rub would taste so I went with a more traditional rub.  I was tossing various ingredients in and didn’t keep track of the amounts of each so I can’t do more than list them from memory:  Black pepper, kosher salt, onion powder, granulated garlic, smoked paprika, ancho powder, regular chili powder, fresh ground cumin, some powder out of a bottle of Goya “Adobe Seasoning” (it’s yellow – go figure), creole/Cajun seasoning, oregano, and probably a few more. 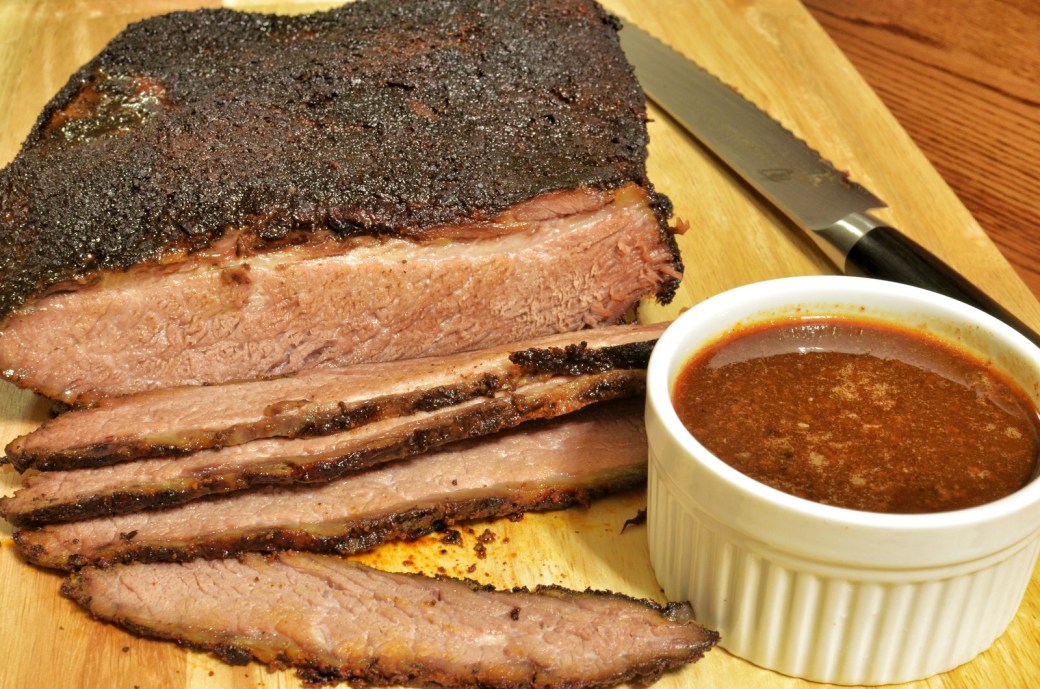 I placed it on the top rack of my electric smoker, threaded the temp probe through the vent and into the thickest part, placed a drippings pan with an inch of apple cider under the meat, added the soaked hickory to the smoke chamber, closed the door and fired it up.  It’s been cold and snowy so I knew it would take a good while to get to the “done” temperature but I wasn’t thinking 23 hours.  That’s how long it spent in there before I pulled it.  The probe was registering 176 degrees.

I pulled the first drippings pan out because I think it was keeping the inside temperature in the smoker too low and replaced it with a dry pan after about 12 hours.  The quart of cider plus the drippings was reduced to what you see above.  If I could make it by the gallon I’m pretty sure I would be a millionaire in short order.  Awesome stuff.

That’s it for this week. No Bixby update, but he turns 10 months old this weekend, so I’ll put something together soon. Have a great weekend. – TaMara 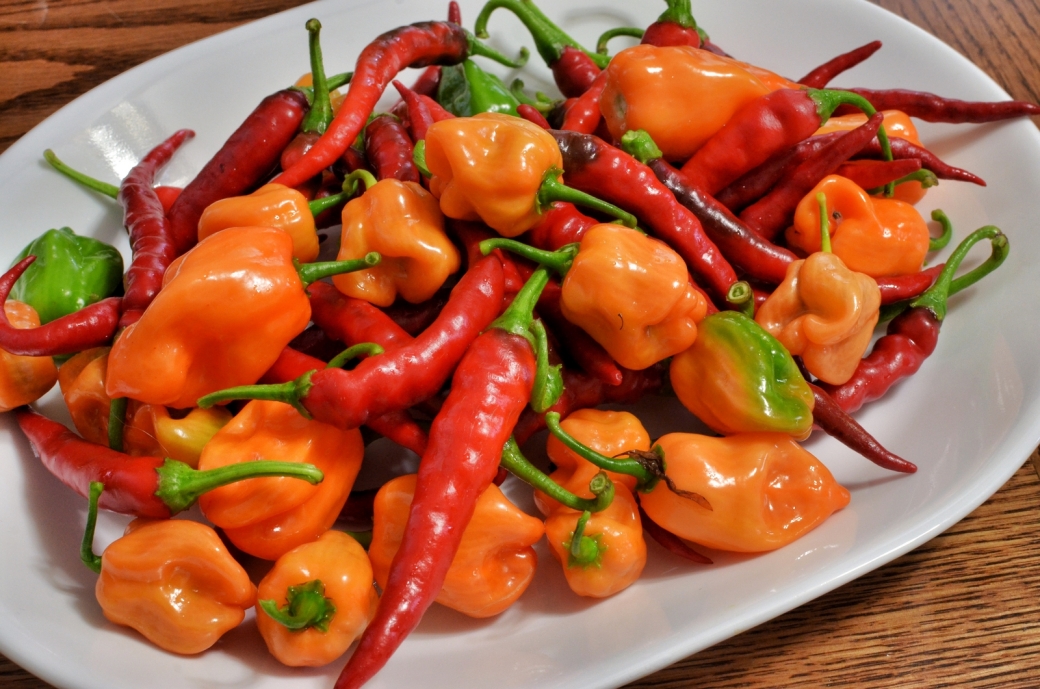 We have an excellent crop of cayenne peppers, this is the third picking from the bush we have in a container out front.  The habaneros are coming along.  I waited a good while to see if they were going to turn red but a few fell off the plant on their own while still orange so I went ahead and pulled all of those with color.  I’ll dry all of these – the cayennes are good for the basic red pepper flakes and the habs should work the same way, only more so. 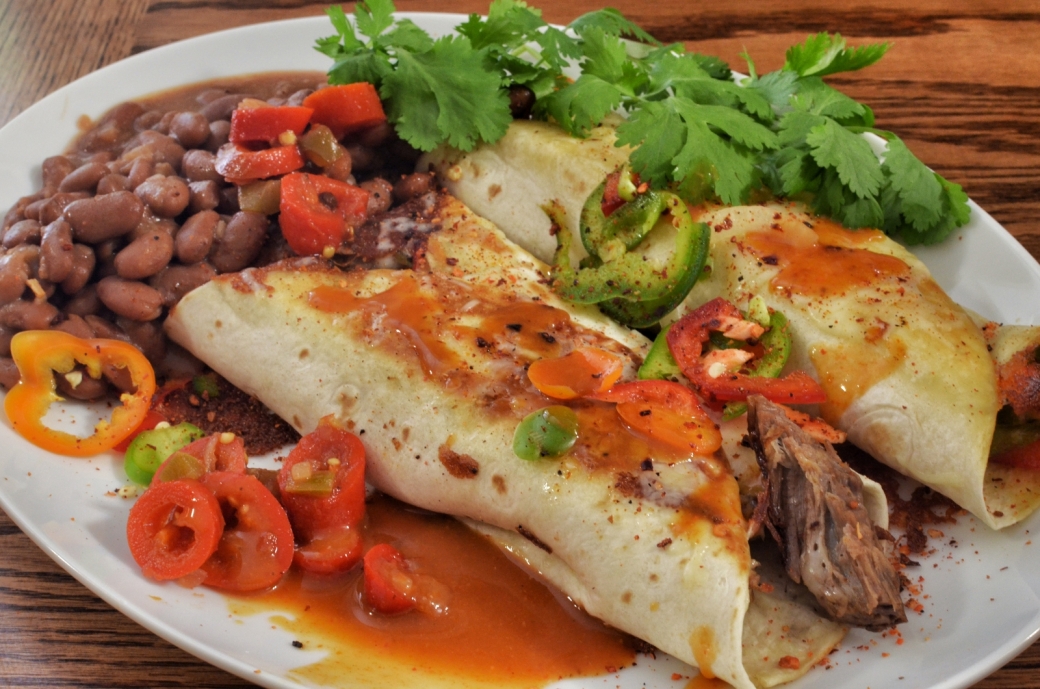 This is, for sure this time, the last of the smoked brisket.  Those orange slices are not the habaneros, they are from the mini sweet peppers.  Not sure I’m ready to nosh on the fresh habs quite yet.  Mrs J came back from the garden with several pounds of tomatillos that we are turning into salsa this afternoon.  More on that later. 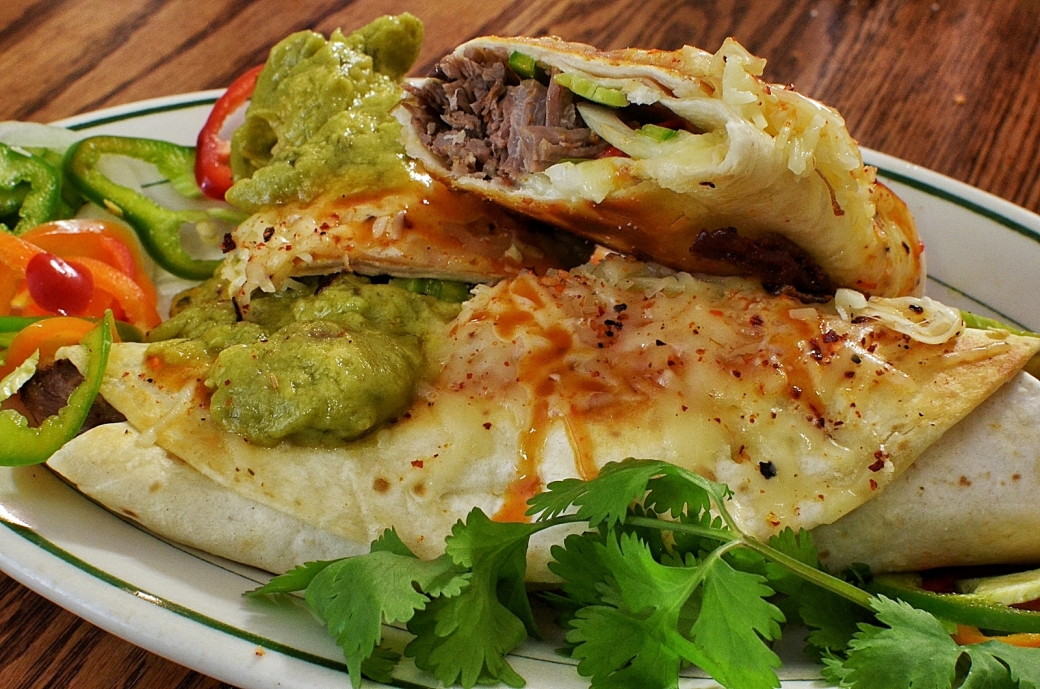 I got the mowing done for another week but was too tired to do much in the kitchen.  Burritos are a great go to for when you don’t want to do much.  I thought I was finished with the smoked brisket but found another portion in the freezer.   These have Monterey jack cheese and various peppers, both sweet and hot, and some store bought guacamole.