I think ten is the sweet spot when baking the King Arthur bun recipe, not too big, not too small.

Made some tuna salad today, we’ve been giving that bread slicing gadget a workout.  Tuna salad on toast is another good way to use the tomatoes we have coming on strong.  Probably going to boil down some more juice soon. 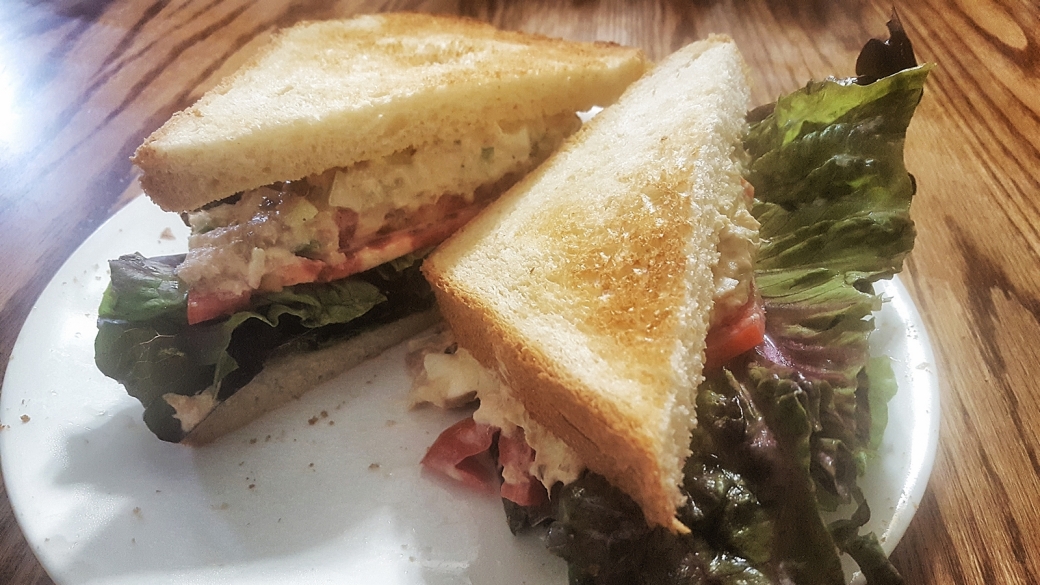 We are starting to grow fond of leaf lettuce on sammiches, it doesn’t have the same crunch as iceberg but it does lay nice and flat and uniform. 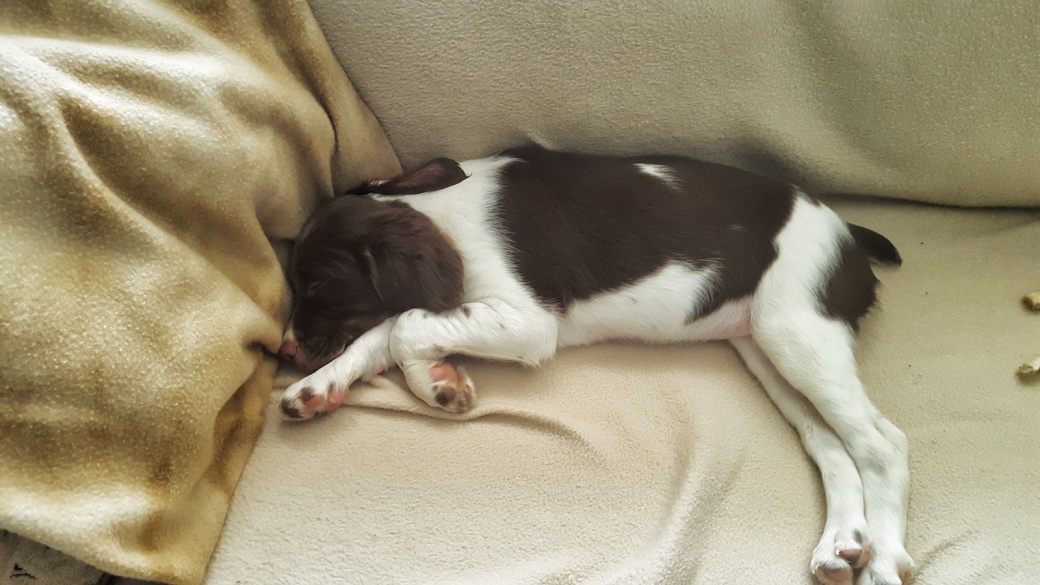 Gabe goes from 90 miles per hour to naptime in about 6 seconds flat.

I have a better photo of the eggs in that nest I first posted about a week ago.  We tried to get a video of the little bird flying from the nest but failed to get anything useful.  I did get a little better look at the bird but just confirmed that it was a wee brown birdie.  It might be a house finch but a tip from a commenter over at Balloon Juice pointed me toward the Chipping Sparrow – the wings of our bird are darker than the belly.

Here’s another cold cuts and cheese sammich with a few sides.

I’ll wrap with a picture from the archive.  I’m tickled by the balancing act this dragonfly is putting on, and I think the colors are pretty.

My bun-fu is improving!  It helped that I went with 12 instead of 16 like the last batch.  I went with a different forming method after watching a few Youtubes to get a better idea of how to proceed.  I rolled the dough flat in a roughly 6″ x 4″ rectangle, and then folded it like I was folding a letter to go into an envelope – top third down, bottom third up and over that.  Pinch the seam and ends and lay them on the tray with a bout a 1/2″ gap between so they rise to touch. 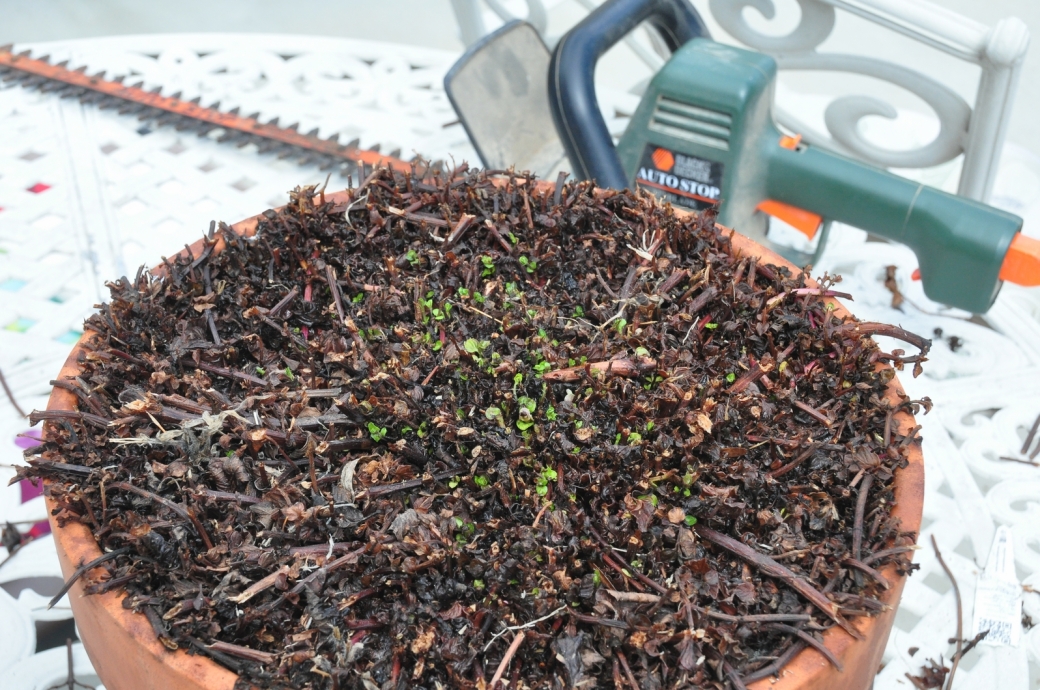 We grew mint is this pot last year, and left it out all winter.  It lasted a long time before the cold weather burnt everything above dirt level.  We noticed new growth so I gave it a haircut the other day.  Mint is tough, we had mint growing wild in Mrs J’s flower garden and it took several years to eradicate.  Last year she told me to plant that nursery seedling as far away from her dirt as I could.

Kimchi!  There is a Chinese buffet that we hit whenever we are close during meal time that has kimchi on their line.  I usually get some, I like it a lot.  I’ve made it before and had good luck but I made so much it was really getting sour before I could eat it all.  Mrs J refused to help.  This is one head of Napa cabbage, plus the carrots, daikon radish, and the rest.  I adapted this recipe.

I left it overnight, covered, in the big bowl on a counter to give the fermentation a start and then put it all in this gallon jar to finish in the fridge in the basement. 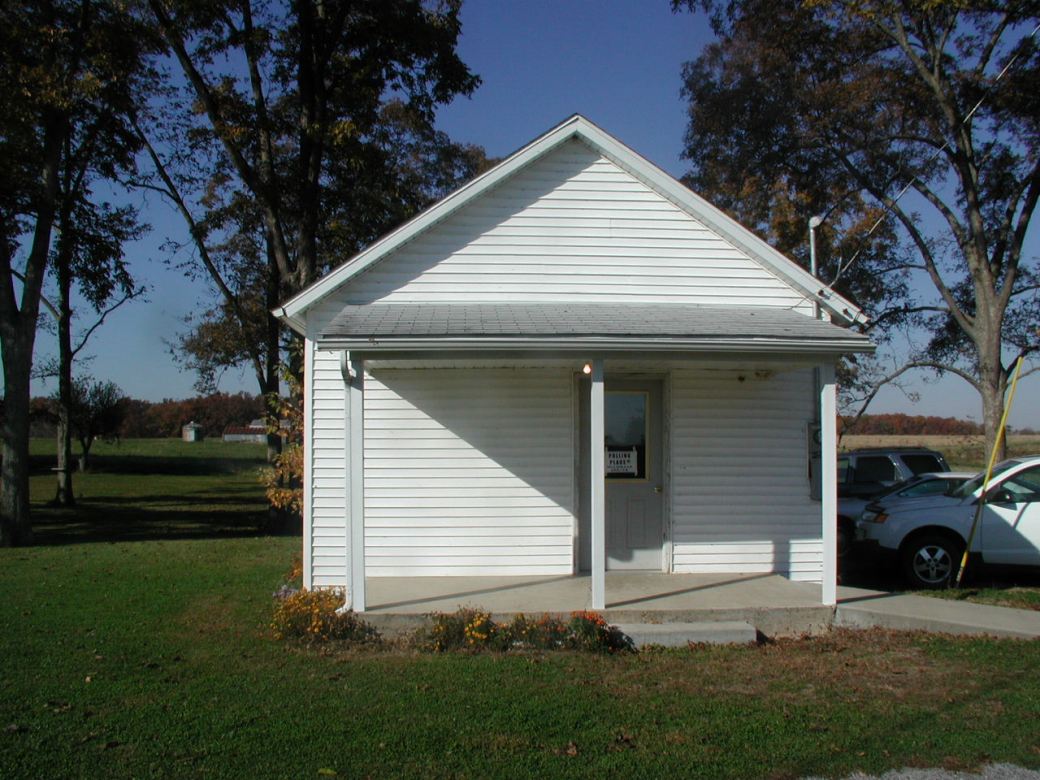 Primary day in Illinois last Tuesday, this is the little township meeting hall where we cast our votes.  One nice thing about living out in the boonies, there is hardly ever a line.

Random wildlife!  This is a young buck that has dropped one of its antlers.  They are shed every year but it’s rare to find them in the woods – they are quickly gnawed down by little woodland critters.

One more – at first glance I thought that the bird standing behind the deer was a crow but a second look showed it to be a hawk:

I’m no expert on bird ID but I think this may be a juvenile red shouldered hawk.  I don’t know for sure why it is standing there at the pond but we often see wood ducks right there, either in the water or ashore looking for the corn Mrs J leaves down there.

I used the King Arthur bun recipe for these, the recipe is great but my bun-fu is still weak.  I have another batch working right now, I’ll do it divided 12 ways rather than 16, most of the buns in this first batch are a bit skinny but I did manage to find a few that were just right.

Pork tenderloins, pounded thin, make for fine sammiches.  I floured this one, dipped it in egg, and then into bread crumbs.  Fry in a half inch of 325 degree oil – too hot and the bread crumbs will burn.  They will cook pretty quickly being all thin like that.  I stirred sambal chili paste into mayo for the garnish spread on it but you can use whatever suits you.  I had no lettuce or there would be some on there, shredded just so.

These are the first go at sammiches with my latest batch of buns: Pulled pork with slaw.  I think the size is perfect and the King Arthur bun recipe really shines.

I made two different corn salads yesterday, one was black beans and sweet corn, the second was red beans, hominy, and sweet corn.  Both had the same dressing so there wasn’t any good reason not to combine the two when putting them away in the fridge.

This little boy was left at the door of the shelter last Sunday, along with his sister.  At least they weren’t left to fend off coyotes out on a country road somewhere.  He’s had his shots and has been released into the kitten house with the others.  Too small yet to be chipped and fixed – Mrs J says the vet’s rule-of-thumb is to wait till they weigh five pounds, or roughly four to five months. 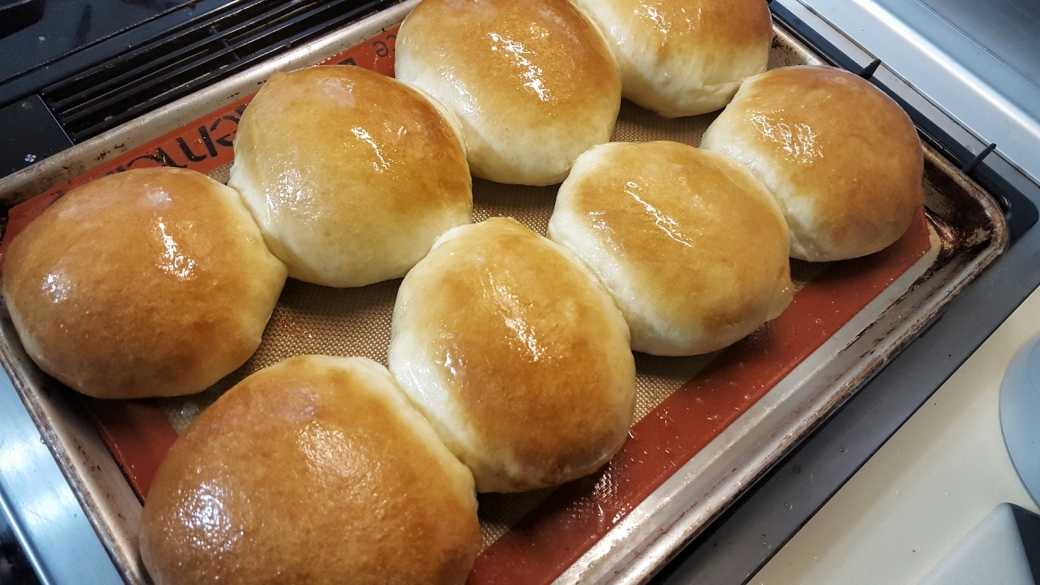 Moar buns!  These are still warm and I’ve just brushed them with melted butter.  They smell great!  We’ll have sloppy joes on a couple of them tonight.

This one just came in with three siblings.  Mrs J doesn’t have any info on any of them. 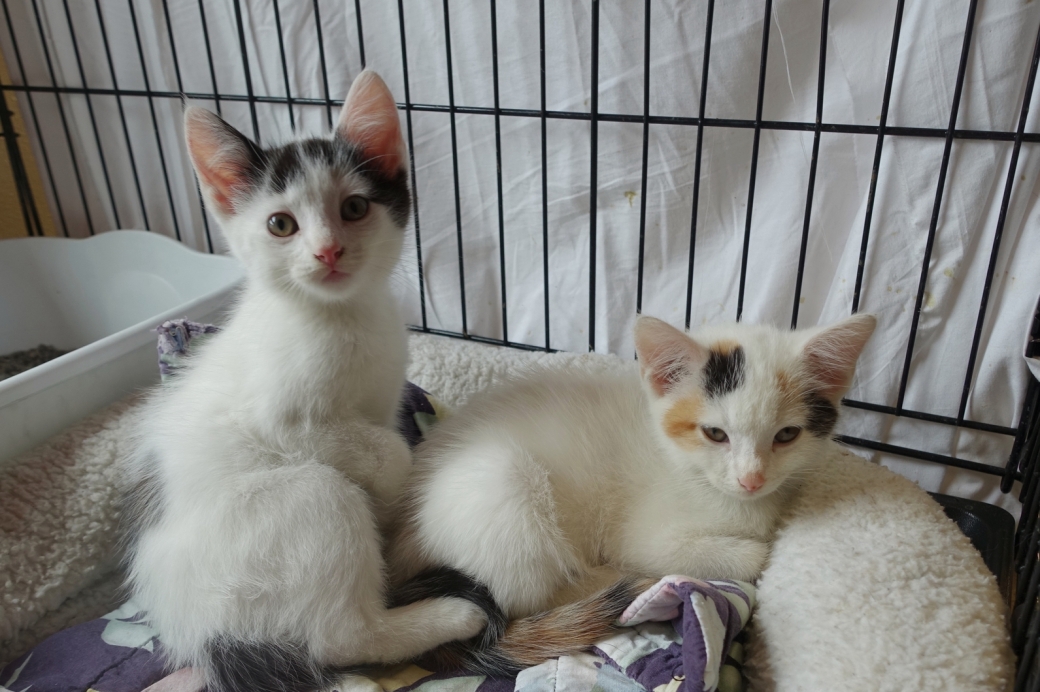 Here’s that same kitteh with a litter mate, calico coloring about the head and tail.  A pair of real cuties.

I’ve been making the dough for the buns in my bread machine, letting them go through the first rise before dumping them onto a plastic mat to divide and shape.  I wondered the other day what the loaf would look like if I just let it go ahead and complete an entire bread cycle in the machine.  Bad idea, the loaf grew much to big and was sticking to the lid.  I’m guessing that full tablespoon of yeast the bun recipe called for had a lot to do with that.  Today I dumped the dough and cut it into two pieces, tamped it down into the pans and let it rise for another 45 minutes before sliding them into a 375 oven.  After 20 minutes they were done. 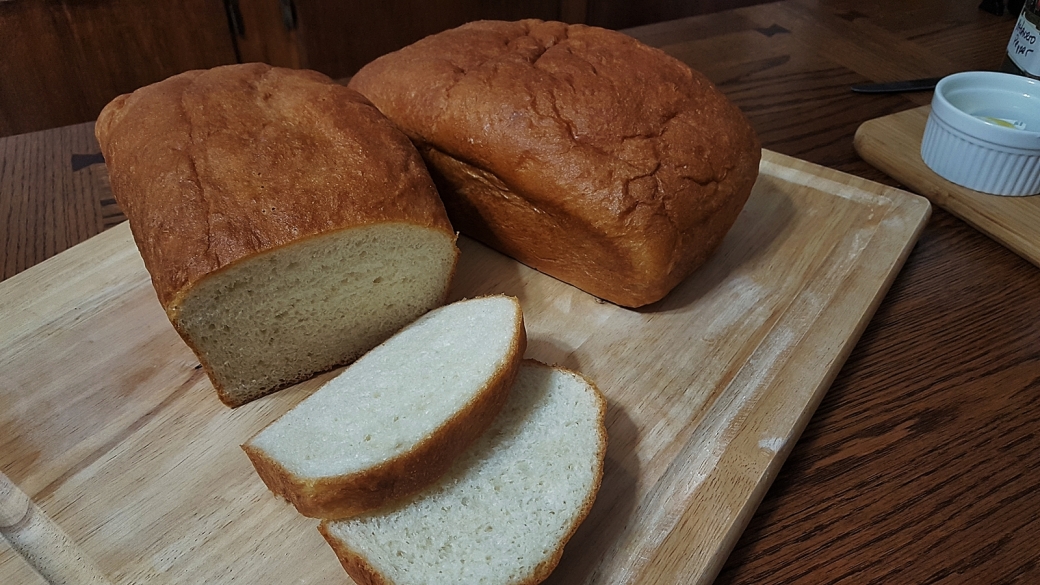 They look and feel much like regular store-bought white bread, same texture and crumb, a bit more chew to the crust.  I bet they make killer BLTs. 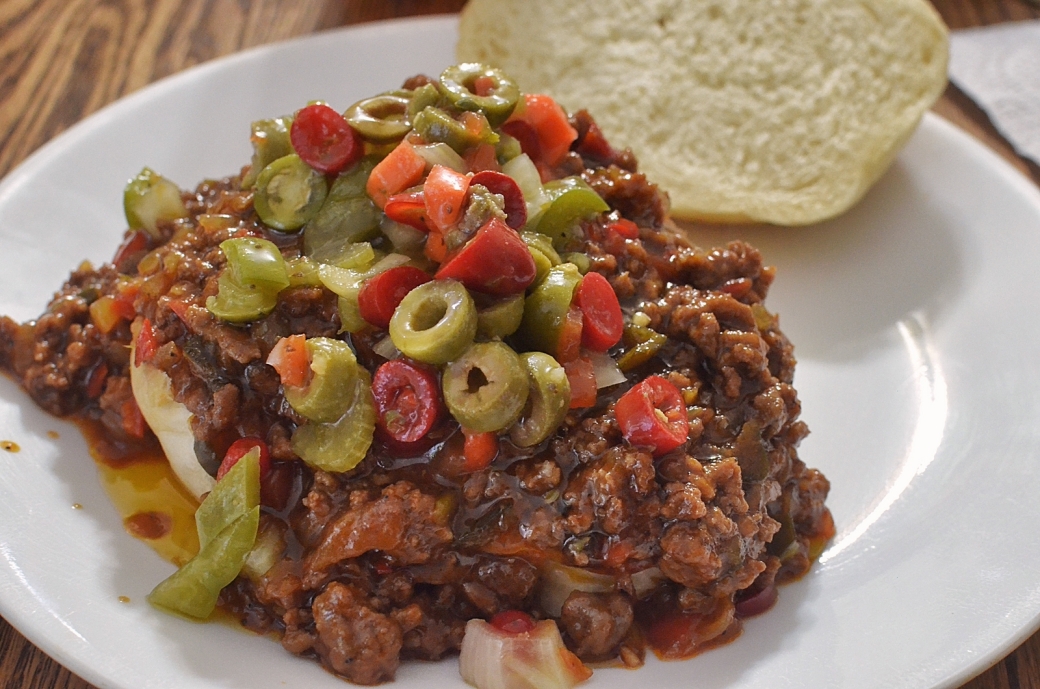 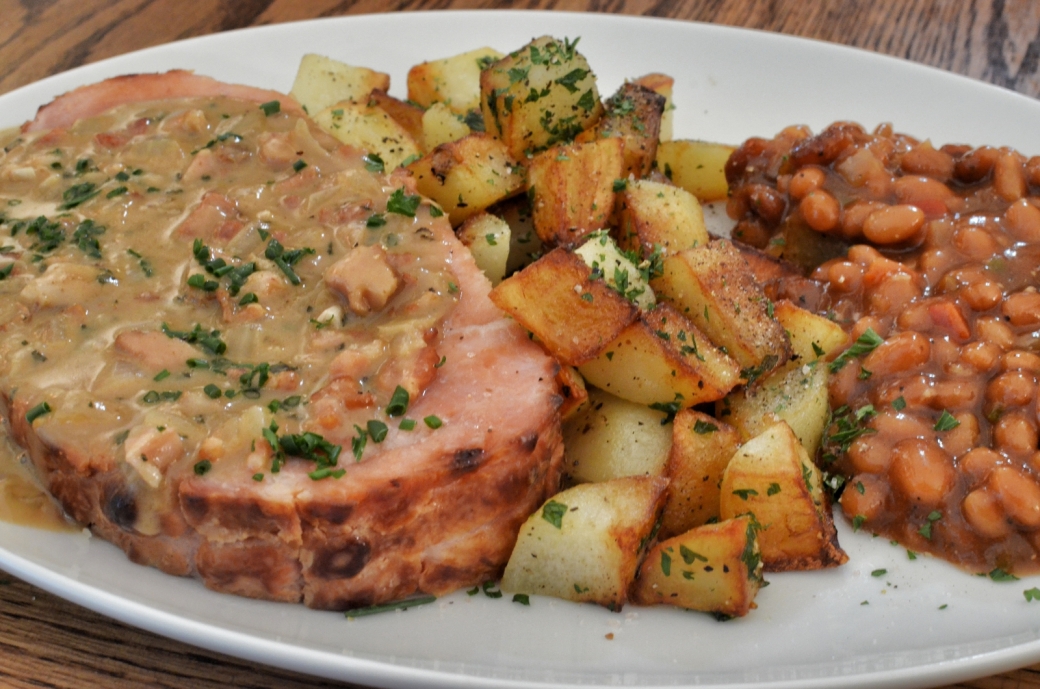 Mmm… thick slab of ham with a fancy redeye gravy.  The home fries were cooked in duck fat and were fantastic.  The gravy was developed for a chicken fried steak dish but I went with it on the ham despite it being maybe over the top because it has diced ham and bacon in it.  It would be fine for biscuits or mashed potatoes. 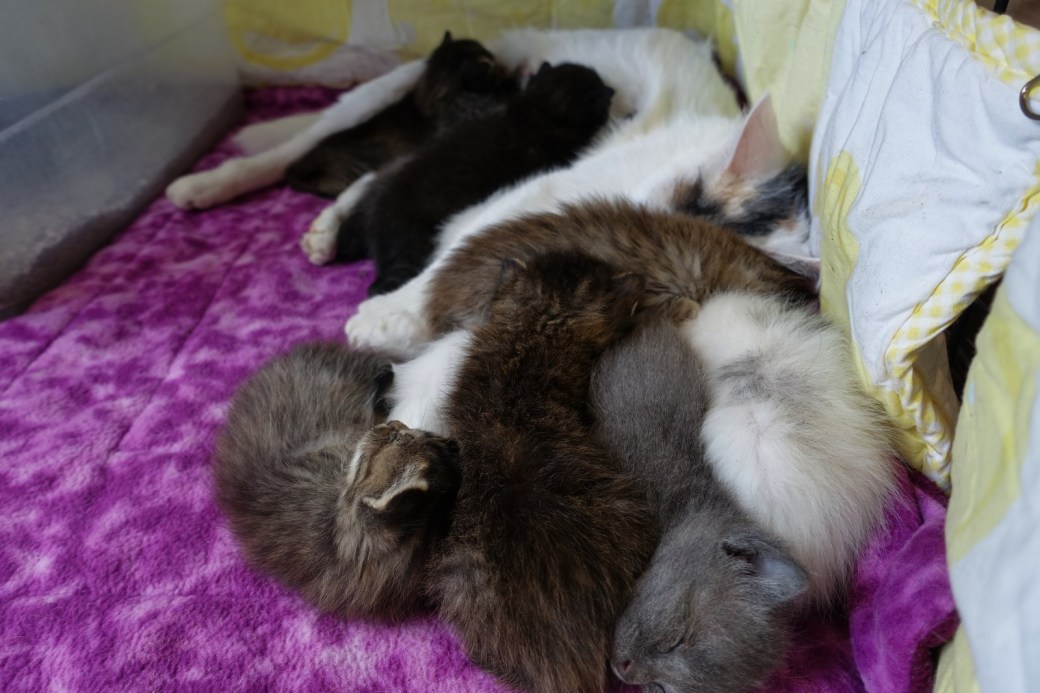 Kittehs!  This momma cat and her 10 kittens were abandoned in a parking lot in 95 degree weather.  A good Samaritan brought them in to the shelter before the heat got to them but the mother cat was in some distress.  She’s fine now, or as fine as a busy momma can be with 10 youngsters to feed.

Buns, fresh from the oven and brushed with melted butter.  I’m getting better at shaping these things but it’ll be a while before I can claim real expertise.

Mojo chicken with a mojo dipping sauce.  It’s a half cup each of sour orange juice and olive oil, with plenty of minced garlic, a couple tablespoons of white vinegar, and salt and pepper to taste.  In the background is a variation on the classic Cuban black beans and rice – I added tomato bits and fresh corn to the beans.

Mrs J left a cat bed and a few pet cage pads out.  Most of her output goes to St Francis but she offers them around to other local shelters and they are usually happy to have them. 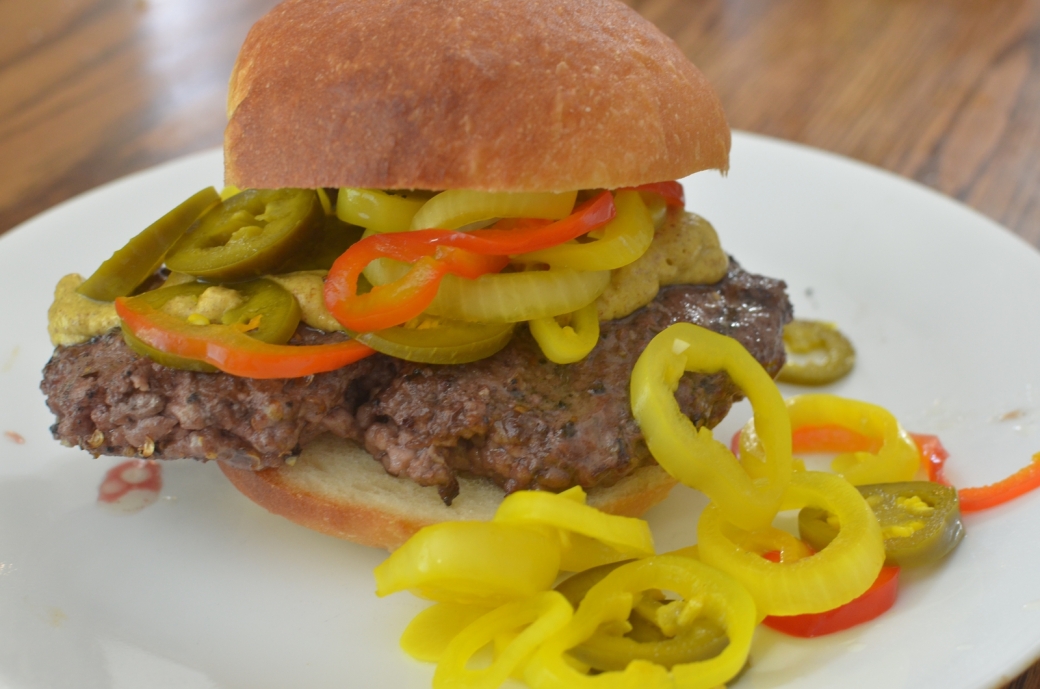 I keep a jar of refrigerator pickling brine on hand to use up some of the peppers the patio container garden is producing.  Whenever I cut up an onion I toss the excess in with the peppers and it works great as a topping for the occasional hamburger. 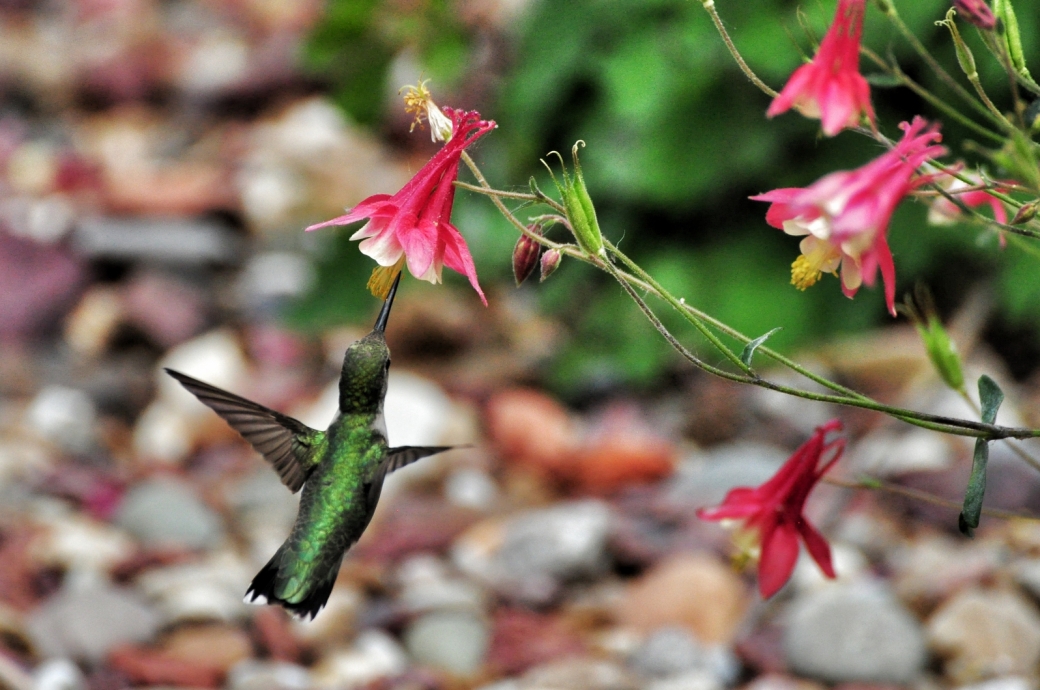