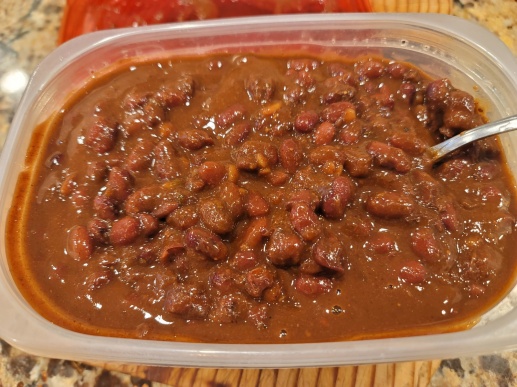 END_OF_DOCUMENT_TOKEN_TO_BE_REPLACED

Fires and late freezes last year left us with very few peaches from the Western Slope. But this year, a bumper crop means a fresh delivery from the Palisades farms every few days. I buy a few each time,  so that I don’t have to many overripening on the counter.

This is one of my favorite peach recipes. Great on grilled pork or chicken.

END_OF_DOCUMENT_TOKEN_TO_BE_REPLACED

What do you do with a counter full of peaches and jalapenos? Well, make peach salsa, of course.

Mix together and let meld together for about 30 minutes or more before serving. Great on chips, on Fajitas or tacos.

I said I made a big pot of chili. Chili cheese tots! Half a chili dog! What could be a better use of that old chili?

Oh, bother! A big limb broke off at the crotch of this Braford pear tree. We planted that tree not long after we took up residence.

We managed to get it cleaned up and deposited onto the brush pile. We try to add new material to the top but it’s getting tall enough that sometimes we slide a bit.

I’m breaking in a new phone, a Galaxy S10. It has the same 2X optical telephoto lens on the back that the S9+ has but in a smaller sized chassis. I used all of that 2X for the Ginger portrait because he gets nervous when I seem to be paying him too much attention. The Samsung interface of the Android OS has been tweaked some making finding certain settings a chore but the lens options are still in the same place.

I think we’ll finish off the potato salad today. The three bean salad just grows with new cans of beans added every now and then. I drain the juices and make a new vinaigrette for it at least once a week.

I’m pretty sure they’re not mooning the camera but the tails make that determination difficult, so who knows?

Those chips are deep fried flour tortilla wedges, dusted with kosher salt and a ground mix of dried chili peppers.

They are absolutely delicious.  I toss a few at a time into 350° oil for 30 seconds or so before flipping them over to brown the other side.  Drain them on paper towels while the next batch is frying then transfer into a bowl where you can toss them with the seasonings. 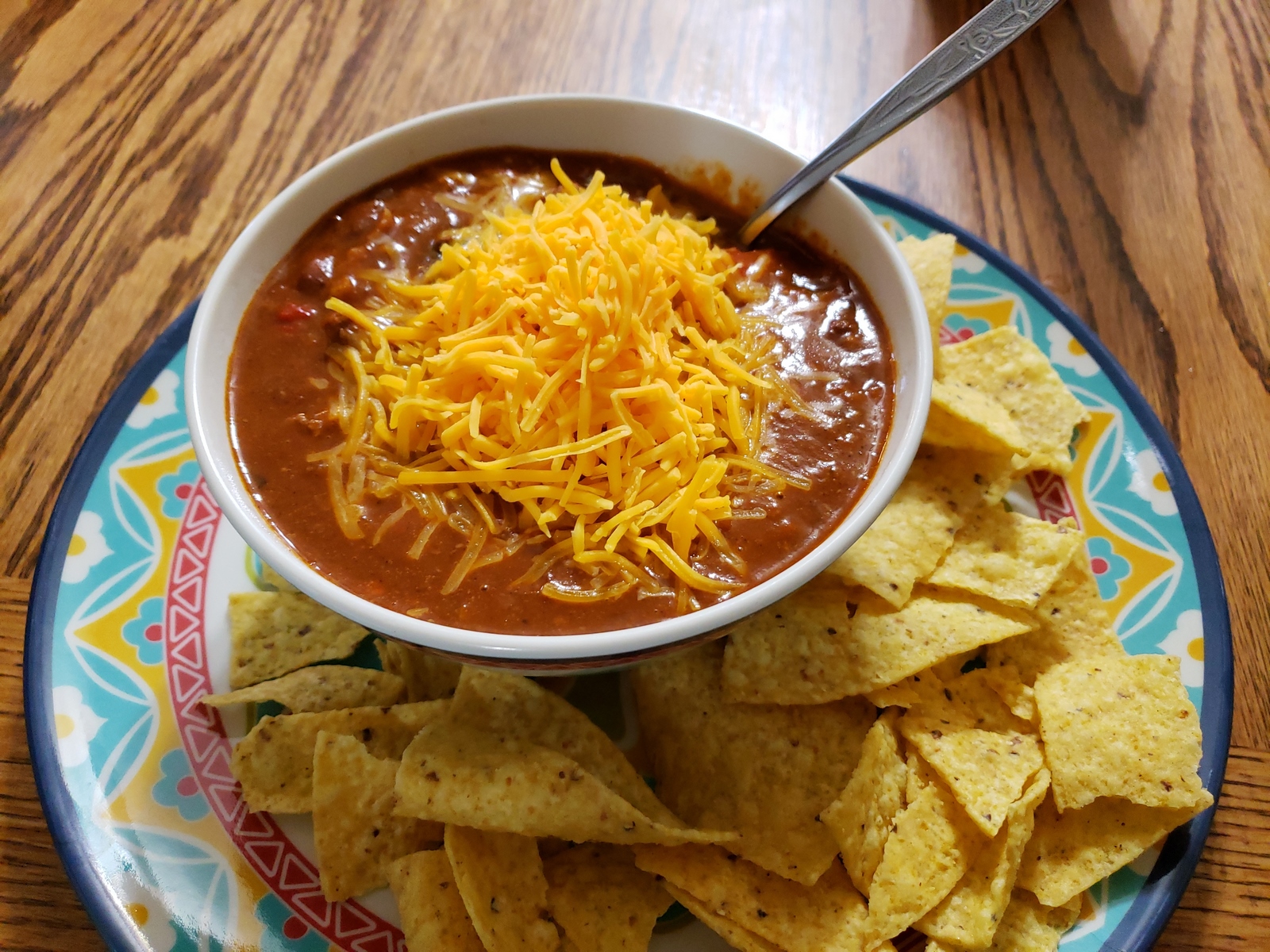 It rained nearly all day and quashed any hopes I would get the yard mowed before it gets to the baling hay stage.  Chili works well on these sorts of dark, cool days.  I roasted poblanos and a red bell pepper over the biggest gas burner for this one, and added in a couple jars of the copycat Rotel tomatoes we canned last year.  It’s straight beef because the chorizo I thought I had, I didn’t.

We’re still turning out nontrivial numbers of tomatoes and the odd pepper or two.  You can deal with them one at a time with a simple sammich.

I like these on fresh bread or toast with mayo and plenty of salt and pepper.  The classic summer salad of tomatoes and cucumbers in vinaigrette is good but were are just about wore out eating it. 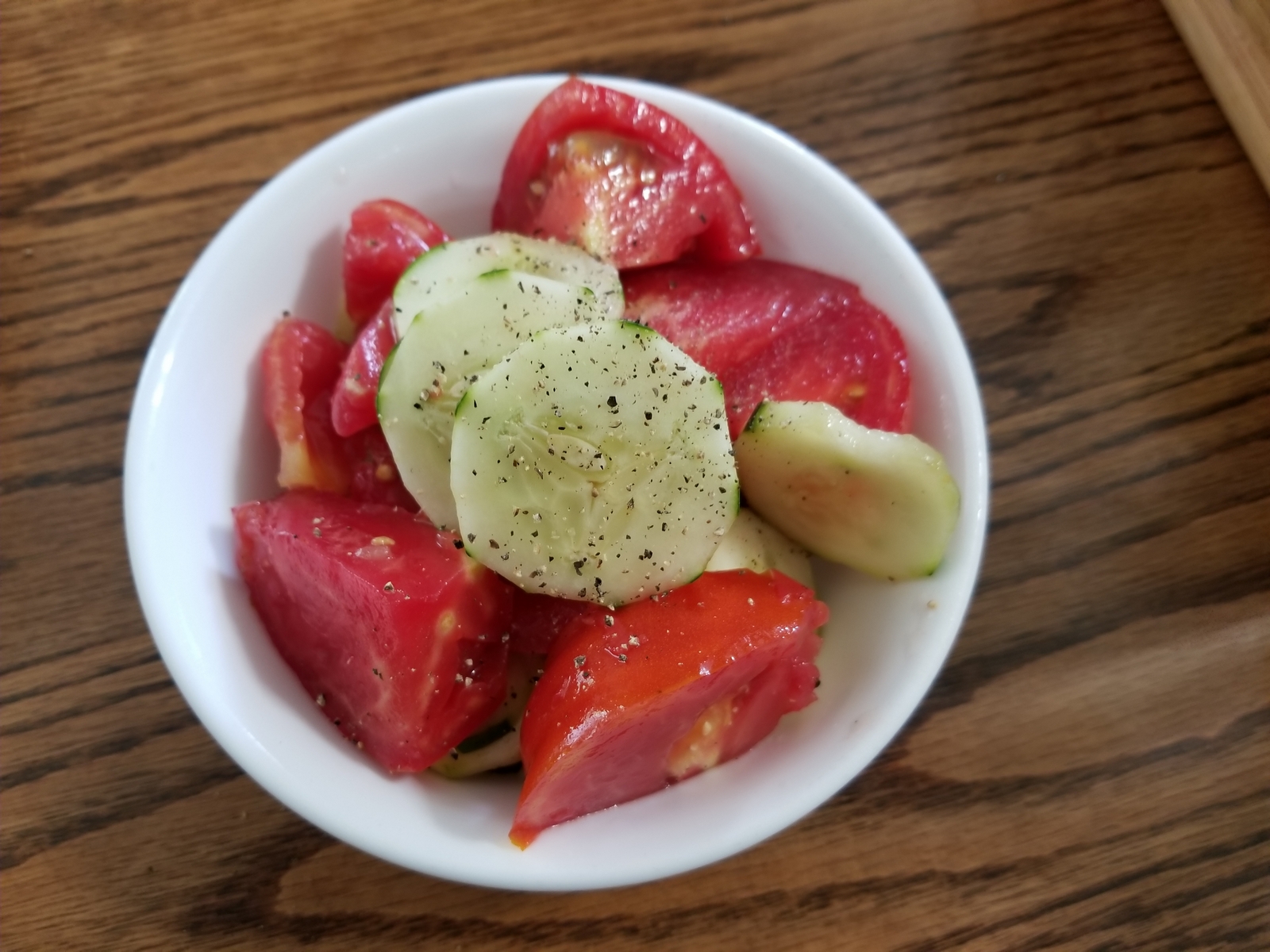 To deal the rest I’ve gone to, mainly, stewing them with onions and peppers.  Mac in stewed tomatoes is a simple pleasure.

The classic version of this is made with elbows but I ran out of my favored jumbo, ridged elbows to I subbed these small shells.  I like mine with Parmesan and a light sprinkle of red pepper flakes.

The rest of the latest batch went into this chili.  I’ve been using annatto in my chili and I think it adds an interesting flavor.  Masa flour makes a nice thickening agent and adds a nice flavor to the dish, as well.

We’ve more tomatoes on the way…

Whoo Boy!  We got some rain last night, the thunder seemed constant all night long.  Bitsy just crawled out from underneath the sofa a few minutes ago.

Here’s Gabe and Homer Kitteh messing about by the pond a couple of days ago.  It’s been down a little all winter long, several inches below the overflow pipe.  I haven’t looked this morning yet but it has to be up close, now.

I’ve found that using a can of refried beans in my chili recipe really adds some body to it.  I used refried black beans in this but the regular refries from pinto beans should work fine.

I’ve been making gravy from the chicken fat captured when I roast a chicken beer-butt style:

I pour off the fat (and the water I’ve added to the pan) and refrigerate it to make separating the fat easy.  Make a roux of the fat and flour then add stock to make gravy.  You can also add milk to make it creamy but I don’t except when making it for a pot pie.  We eat half the chicken the first go, then bone the rest for later.  The carcass goes into the pressure cooker to make a stock, takes an hour at pressure rather than all day on the stove-top.

Kittehs!  There are a couple of brand new momma cats at the shelter, they were brought in pregnant.  The shelter will eventually spay her but the kittehs have to be weaned first.  Mrs J says 6 to 8 weeks is normal.

Rib steaks!  Sous vide is the killer app for steaks.  These spend the afternoon at 138 degrees in their vacuum sealed bags.  Kroger sells whole slabs of these, I slice and bag them with salt and pepper and then freeze.  They go right into the hot bath frozen.

Another batch of cuties!  Mrs J says they had to open the overflow kitten room because they have too many right now for the dedicated kitteh nursery.