Inspired by Betty Cracker over at Balloon-Juice.  Not sure why I bought the gallon jug fermentation rig originally but it was probably for this exact same thing.  Fortunately it has been long enough since that I remember nothing about it so it’s like this is the very first time.  I remember seeing some of the yeast I bought last time but I ordered new rather than look for it.

Looked at my Amazon order history, the last time I bought this yeast was 7 years ago so it was probably too old, anyway. 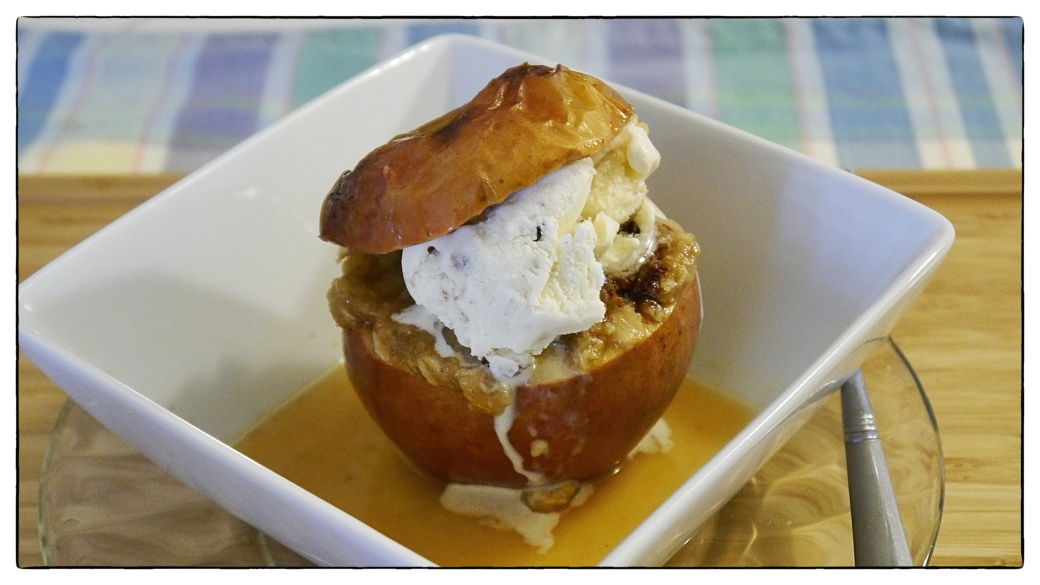 Wandering around the web today, someone posted a recipe for Bourbon Baked Apples. Hmmm, I have bourbon. I have apples. Guess I need to bake some Bourbon Apples, stuffed with oatmeal crumble.

In a bowl, combine oats, brown sugar, flour, salt and cinnamon. Add softened butter and vanilla, and mix thoroughly. You want it to be crumbly.

Cut the top off the apple, enough to use as a lid. Scoop out core and seeds, being careful not to pierce the bottom of the apple. Sprinkle with additional cinnamon if desired  and then stuff with the oats mixture, packing it in and covering out to the edges of the apple. Place the top of the apple back on and press down.

Place apples in a large baking dish. Pour apple cider and bourbon in the bottom of the pan. Place in a 400 degree oven and bake for 30 to 45 minutes, until skin is soft and wrinkled and flesh is soft. During the baking period, baste every 10 minutes with the cider/bourbon mix.

Sorry, just had to use that title!  LOL  Mrs J really liked TaMara’s apple crisp the other day and she set out to make it for herself.  Some slight alterations to the recipe:  She wanted more juice so into the apples cooking  in the skillet went a half cup of apple cider with some corn starch so that it would thicken a bit more, and a few raisins because why not?  Heh, indeed.  Fresh grated cinnamon and nutmeg added some nice flavors.  She used the Splenda branded brown sugar.

The crumble topping looked like some hazelnuts would help it so the rest of a bag went in there, probably 1/2 cup.

It stayed in the oven long enough to toast the topping:

This may be the fruit dish I go with as a dessert item.  It has pretty holiday colors when finished and a tart flavor as a perfect complement to a good quality vanilla ice cream.  If you want to make it an adult affair, toss in some brandy along with the cider, or use hard cider.

The farm stand was overrun with apples and a variety of squash when I went there this weekend.  That means it is time to dig out this recipe.  Serve with fresh bread.

In saucepan, cover butternut squash with water and cook until tender. Drain, reserve liquid and set aside. In saucepan, add oil and butter, sauté onion and apples until tender. Add cider, water, bouillon, cinnamon & cloves. Simmer for 5 minutes. In a blender or food processor begin to blend squash. Add apple mixture, blend until smooth, add milk and additional water if needed. Transfer back to saucepan, let simmer for additional 5 minutes until heated through. Serve with dollop of sour cream, and additional cinnamon.

The Day of the Dead festivities last month gave me an opportunity to sample several different versions of Mexican Hot Chocolate.  I wanted to like it, but so far, have been unimpressed.  Most were too sweet and not spicy enough.  So now I’m on a search for the perfect mixture.  Instant mixes seem to be the worst offenders, so I will try a couple of recipes I’ve found.  I’m looking for a darker chocolate, more spice and less sugar.  I’ll keep you informed of my progress.

Also on the hot drink train of thought, I’m going to try my hand at mulling cider this holiday.  Never done it before and really want to give it a try.  I’ll probably start with a mulling kit, see what that’s like and then come up with my own blend of spices as I get a feel for what I prefer.

It’s snowing here again today and I have a full day, but I will try and get back and put up another quick dinner recipe for these busy days.  Until then….