We seem to be marking time as Big Holiday approaches.  I haven’t been cooking anything new or exciting.  The big snow is melting away in the warm temps that have arrived just ahead of another storm system that promises to dump more precip than we are ready for.  The frontal boundary will probably be far enough to the north that we get rain rather than a mix or just snow. 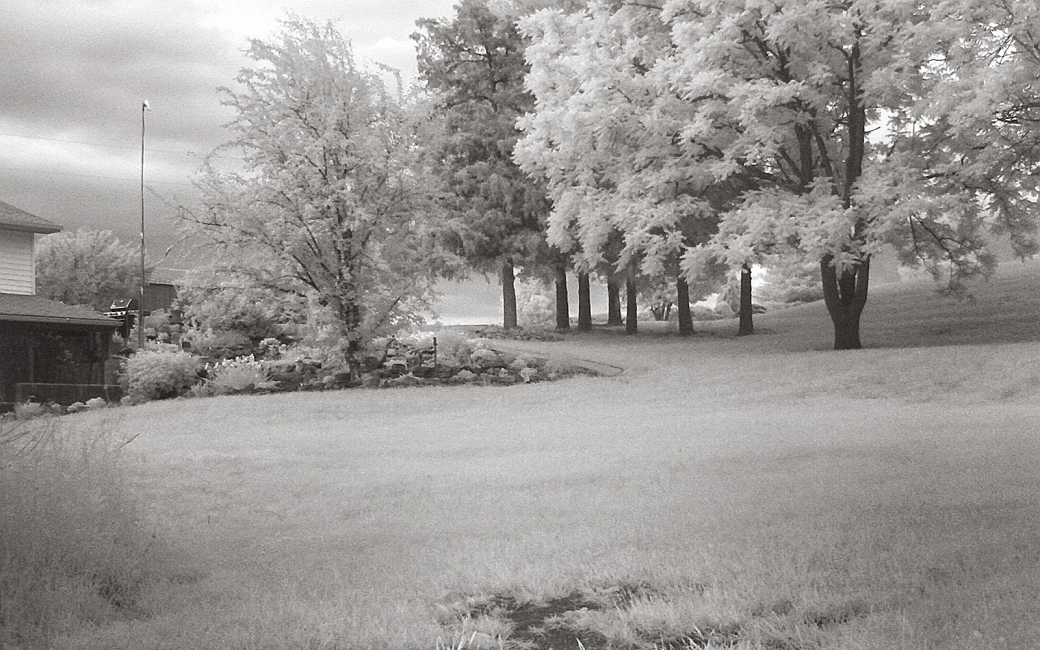 I’ve put this up before.  It looks like heavy frost but it’s just how the wildlife cameras make the green leaves and grass look when it’s changing modes from day to night and has the infrared filter deployed while there is still a good bit of light.  This was snapped in May this year.

Here’s a kitteh for you.  It has an interesting coat coloration, with a fine looking mane. 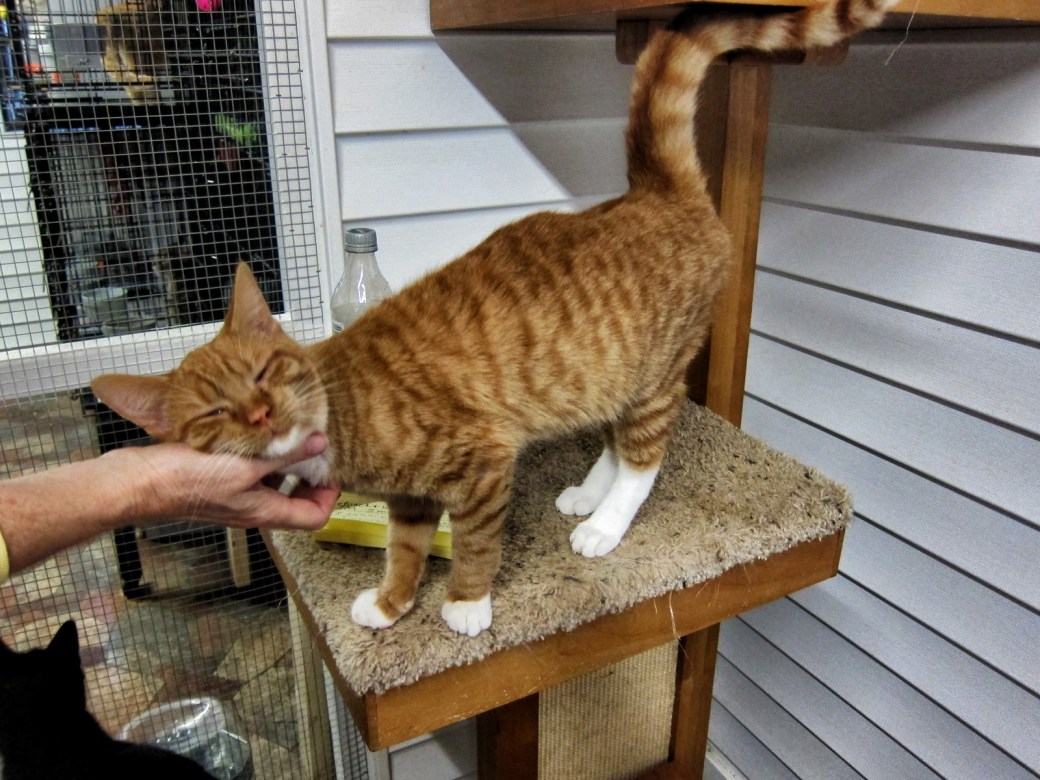 Another pretty kitteh.  I’m sure I’ve had this one in an earlier post but he’s worth another.  Nice stripes over white boots.

A little breakfast pr0n – sausage and gravy over biscuits with a couple of sunny side up eggs.  Let me wrap this up with some hugs and kisses!

I think they just call an assembly of turkeys a flock, but a swarm would work.  Or a congress.  That one may already be taken.

Here’s the male of a brother and sister pair of terrier mix puppies.

And the sister.  Mrs J said the previous owner took ill and was put into a nursing home by his kids.  They turned the dogs loose.  They were picked up by a neighbor and kept until the shelter had an opening.  They are leash trained and housebroken, their meds are up to date, and they will be spayed and neutered. 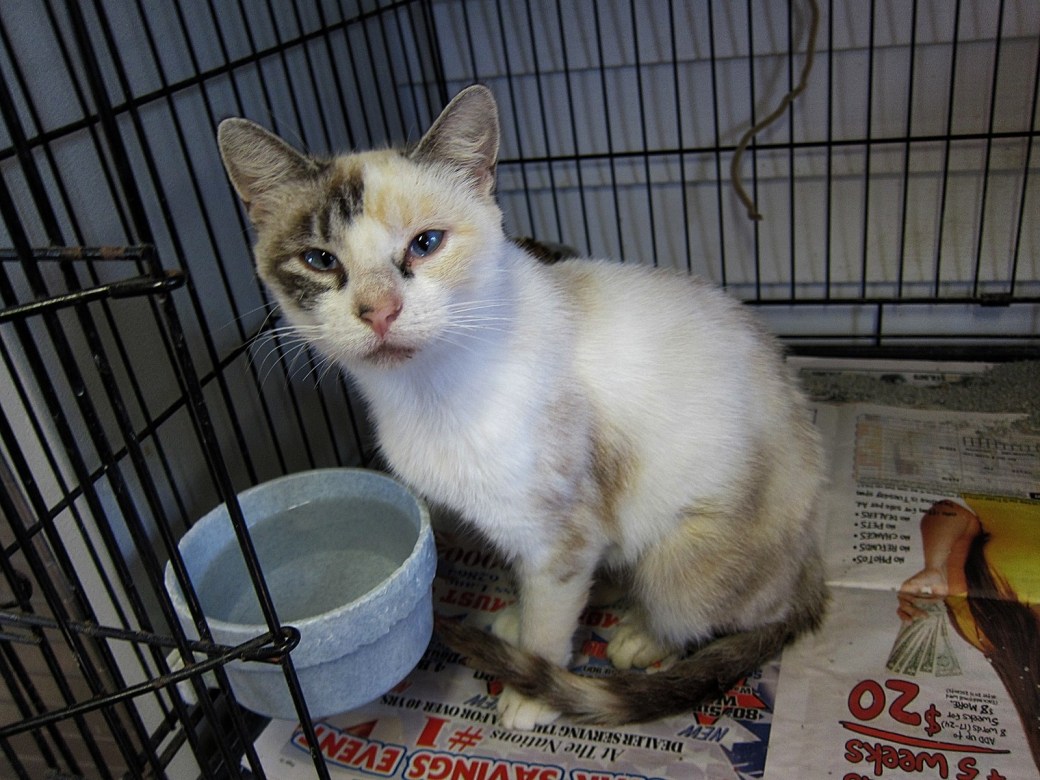 Here’s a kitteh, one of those that were part of the colony that came down with a respiratory illness.  A visit to the St Francis Facebook page will yield more info on the dogs and cats. 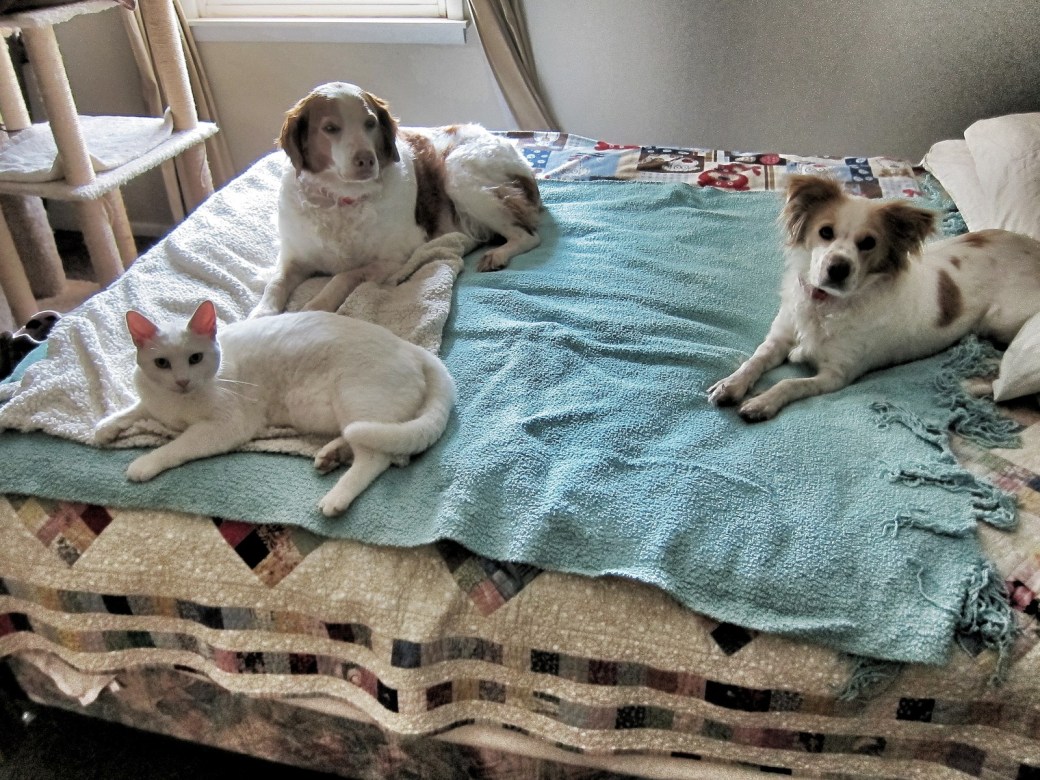 And a quick update on the ongoing Katie integration project.  Here she is with Bea kitteh and Annie, the Brittany Princess.  She loves her some Mrs J but would prefer to not be in the same room with me, unless I have a treat in hand.  She is coming into the kitchen to eat with the other dogs but she is still quick to run away if anything isn’t quite right.  She is eager for her walks, still always on a leash.  I have no idea whether or when Mrs J will let her out without it.  She will make that call.

Mmm… biscuits and sausage gravy.  These biscuits are another success for this recipe.  I fold the dough over on itself several times while kneading it, makes for a nice flaky, layered biscuit.

Jack doesn’t get much exposure so here he is with an expression I will make no attempt to characterize. 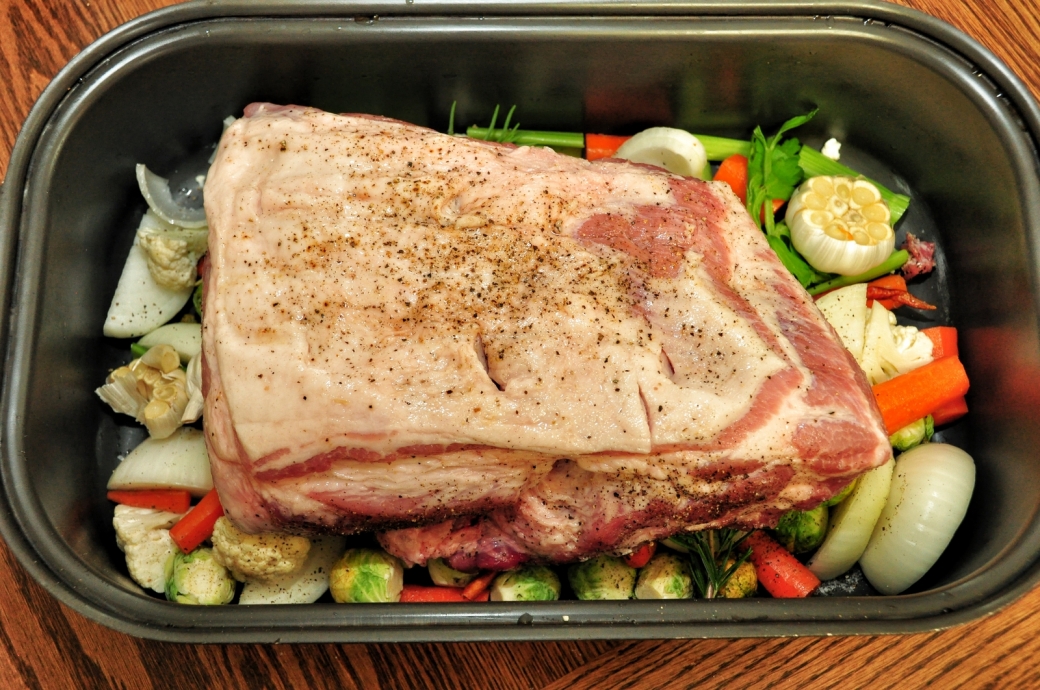 And lots of garlic – two heads in the pan with the other odds and ends of veggies, and one head’s worth of cloves inserted into slits cut into the shoulder.  I had some sprouts, a little bit of cauliflower, onions, carrots, celery, and a few dried red chilies.  I added potatoes cut into largish chunks after taking this photo.

It all cooked, covered, in a 350 oven until the internal temps hit 195.  I took everything out and made gravy with the addition of broth to the drippings, using corn starch as a thickener.  I discarded the celery because it was all yuck.  The sprouts were edible but soggy.  The gravy was excellent. 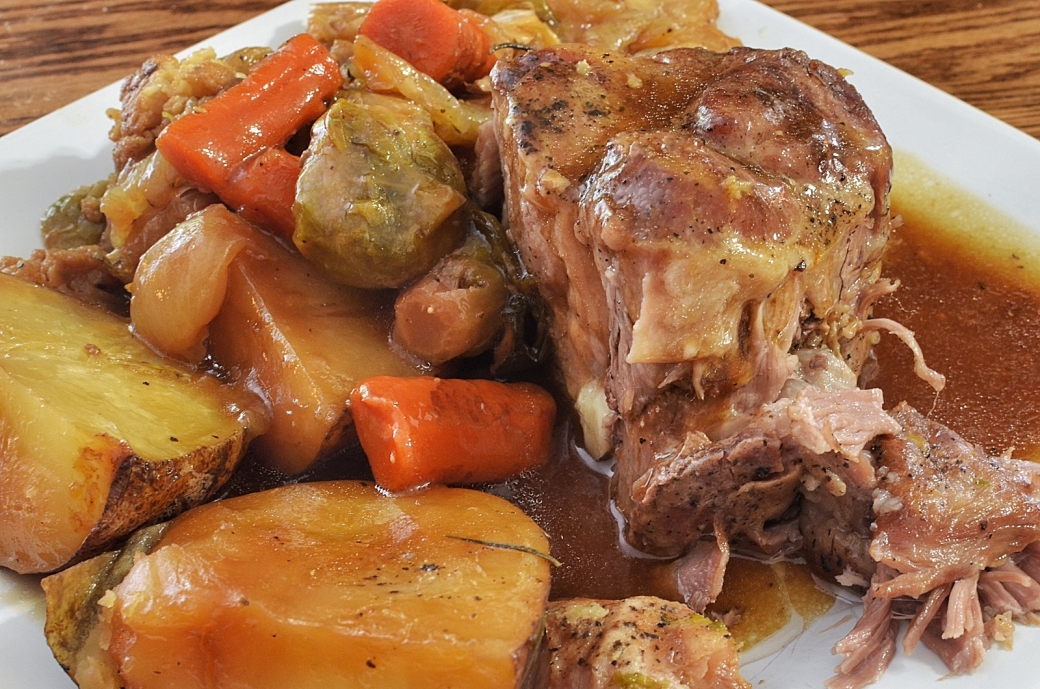 I just had to have a bigger slow cooker than the one we had.  It has given good service for more years than I wish to count but it just didn’t have room for a larger cut of meat plus the veggies and everything.  This one by Hamilton Beach had tons of reviews at Amazon and looked like a winner to me.

You can set it for a certain cooking time or for a desired temperature (via a probe), or just “cook until I stop you” with two cooking temperatures – high or low, (plus a “warm” setting).  I managed to figure out the controls, without going to the instruction booklet, after a few starts and stops and much button poking.

I’m not too sure how well the probe will work out.  I has to be inserted through the lid and into the meat and the exact placement and depth may not be ideal in real world cooking.  I have a remote thermometer that I think will thread through the hole but will only beep at me when temps are reached.  The included probe plugs into the heating circuit and will switch the pot to warm when it reaches set point.  (I think – still haven’t read the booklet.)

This is the first run.  A fair sized beef roast with most of a bottle of red wine and some beef broth.  I coarsely chopped a large yellow onion and tossed that in with a few carrots and stalks of celery as aromatics with six or eight cloves of garlic.  Salt and pepper and the usual mix of dried herbs: Bay leaves, thyme, marjoram, rosemary, and oregano.  Two large whole potatoes went in there as well, the green beans were in another pan.  All the liquids were strained and reduced for gravy, adding to it some sauteed mushrooms.  I discarded the carrots and celery, using some of the onion and garlic for the beans along with a few pieces of ham.

I remembered I still had a few mushrooms left over, still in the fridge, so I sauteed them in butter and olive oil…

…and then made a gravy of chicken stock with soy sauce, steak sauces, and drizzles of this and that, thickened the gravy with corn starch and served it over fries.

Along with a nice cheeseburger, to be sure.

I enjoyed the gravy from the braised oxtails we had the other day so much that tonight’s beef was cooked in the same manner.  I browned the meat in the Dutch oven and then laid it across the roughly chopped veggies.  Today I have carrots, leeks, turnips, and celery for the bed.

A few sprigs of fresh thyme, bay leaves, and a generous grind of black pepper and a sprinkle of kosher salt and it is ready for the wine reduction I had going on the other burner.  Boil a bottle of red wine in a sauce pan until it is reduced by half and pour it over the meat, adding beef broth to just cover.  Put on the lid and cook in a 350 oven for a couple of hours.  Strain out and discard the solids and further reduce the gravy on the stovetop while your potatoes are boiling and the carrots and sprouts are roasting. 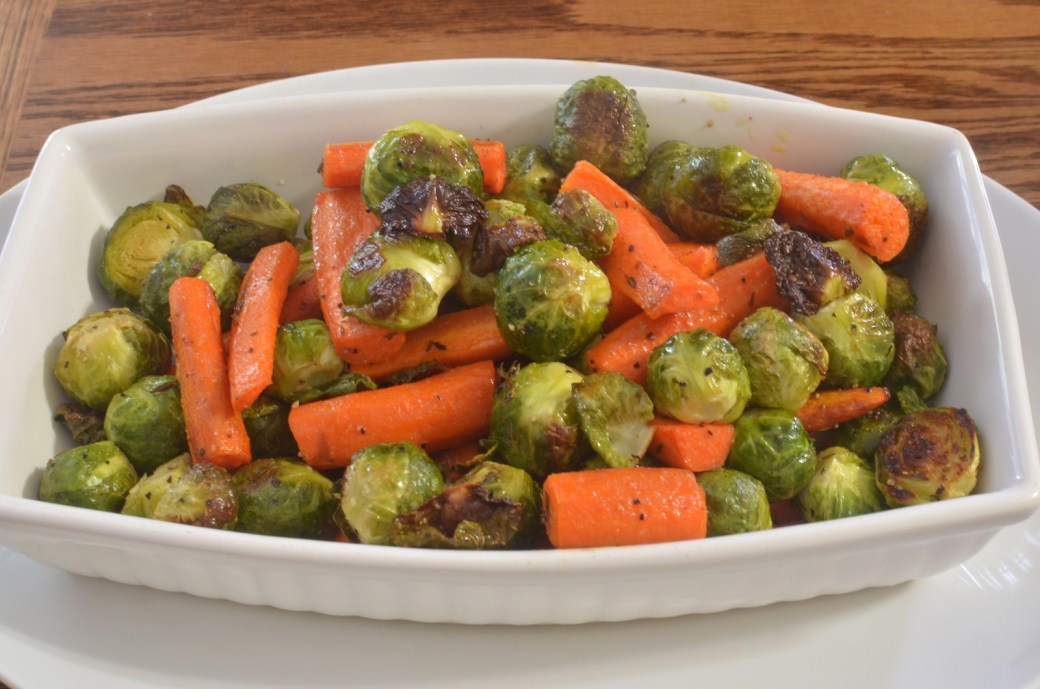 I added two cloves of finely minced garlic to the cooked potatoes and then mashed them with butter and sour cream.  Toss a couple of those nice cloverleaf rolls that you have leftover onto the oven rack while it’s still hot and pretty soon you will have a pretty dinner to call the clan to. 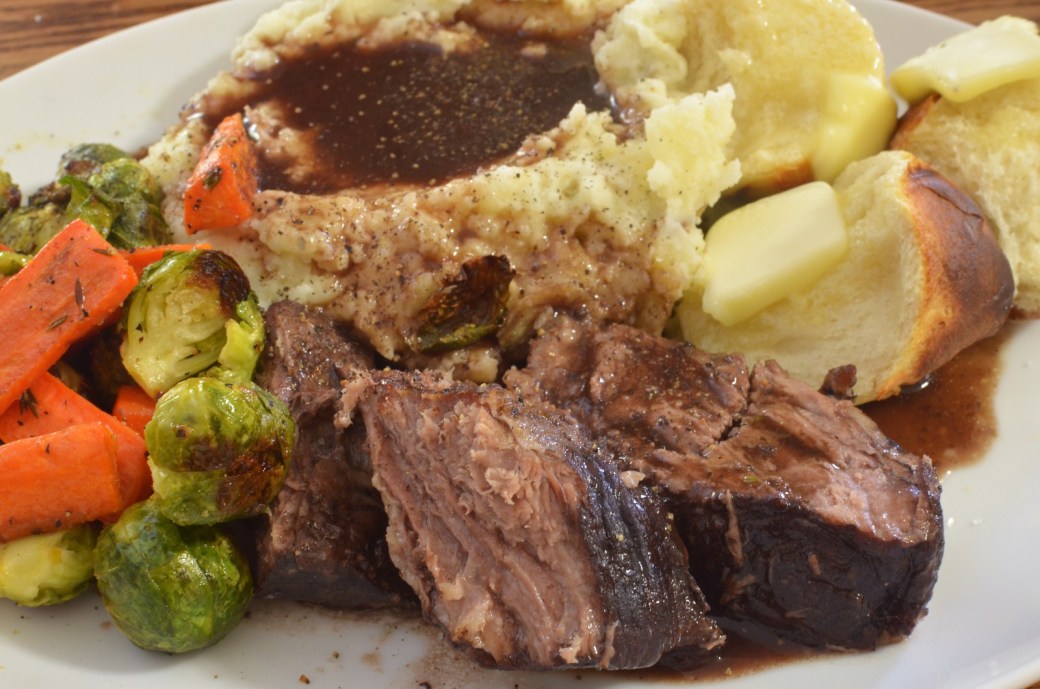 A nice rare beef roast has a lot to recommend it but I’ll take one of these fork tender pot roasts any day.

Mmm… biscuits and sausage gravy.  It’s been a little while since I made biscuits.  I think we have used this recipe before, it is a very good recipe, the baking powder really plumps them up.  I scaled the recipe to 1 cup of flour because I was the only one here for breakfast.  Mrs J has another shift at the shelter today and got an early start.  The sausage was the breakfast sausage I made the other day.  Good stuff. 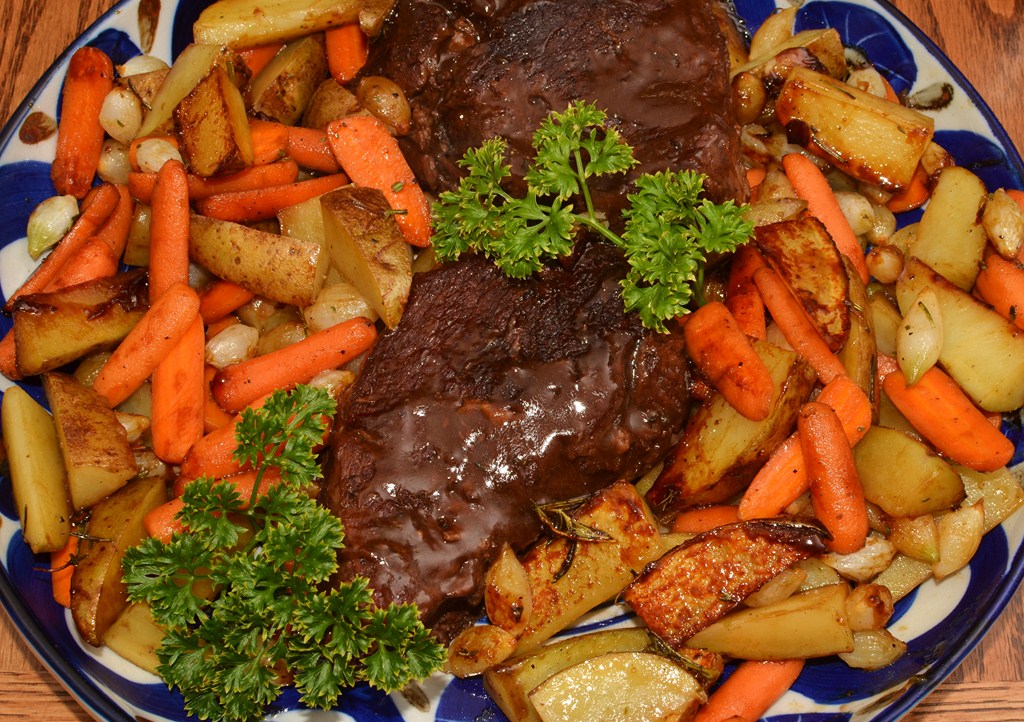 Can’t add much beyond just posting the picture.  It was good.