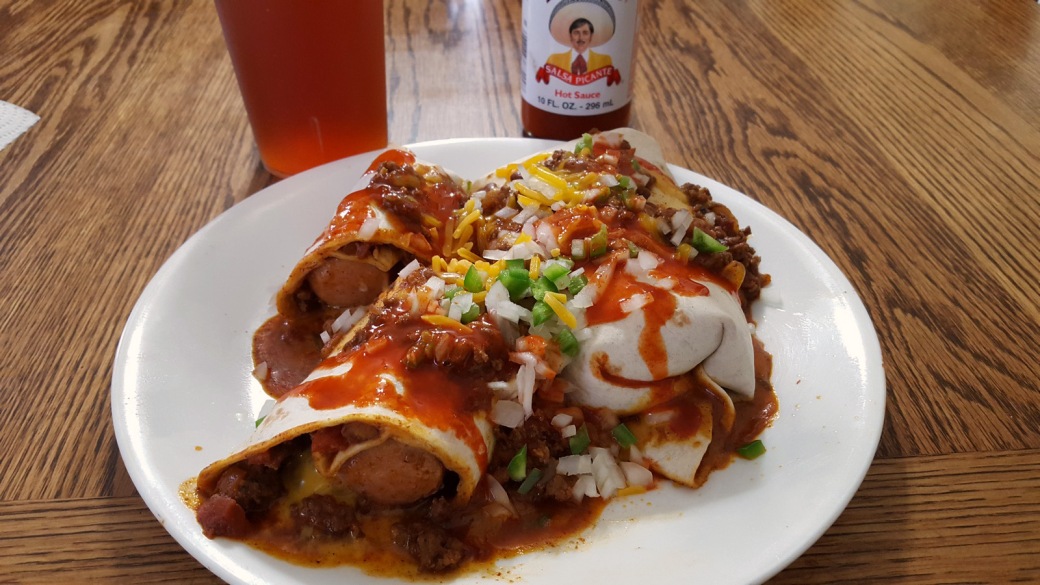 Chili dog burrito for the win!  It works surprisingly well.  That hot sauce is Tapatío, Kroger has been stocking it lately and it’s become my go-to hot sauce. 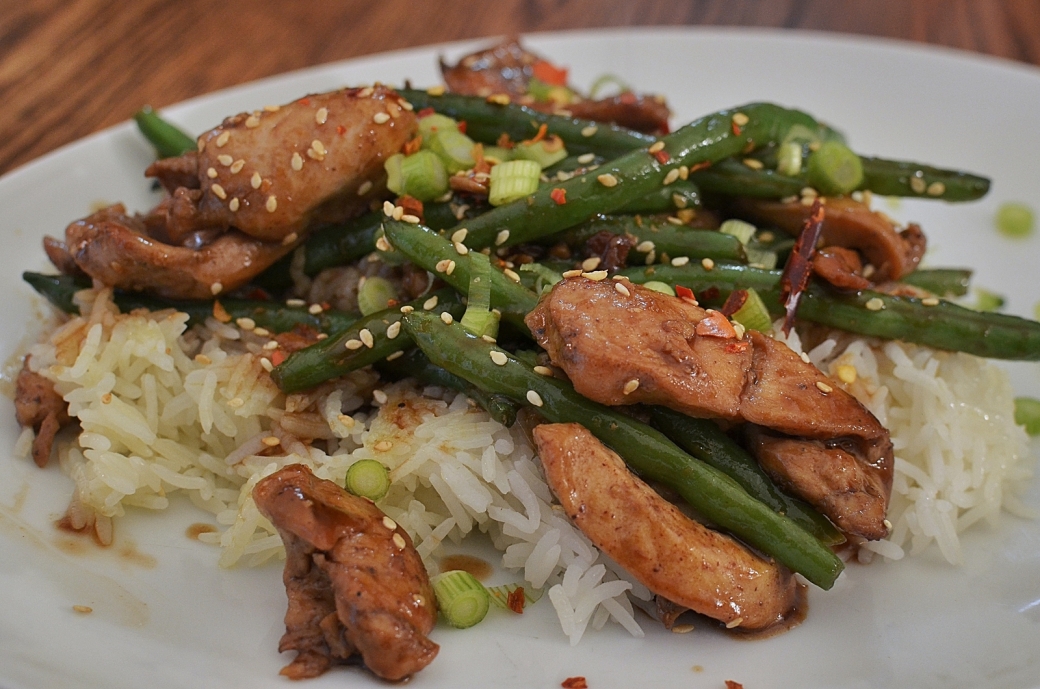 I’m heading out for a much needed girls’ day out with LFern. But I didn’t want to leave you without a recipe exchange. I thought it would be fun to focus on one of JeffreyW’s specialties, he likes to make his own spice mixes and hot sauces. Tonight’s recipe exchange was inspired by his great post this week, Chinese Five Spice.

I was a believer in making my own spice mixes when I put together his Fajita Spice (recipe here), which is better than anything pre-made in the store.

He also loves to make hot sauces, recipes and photos here and here.

One of the most requested sauce recipes is a guest recipe from Down Under, Piri Piri (recipe here).

Not technically a spice, but JeffreyW made his own Garlic Breadcrumbs this week, (click here).

What’s on your plate for the weekend? I’ll going to a few open houses and taking Bixby out to enjoy the predicted spring weather. Do you make any of your own spices mixes or sauces? Give us your favorite recipe.

I knew what tonight’s featured recipe would be as soon as I saw JefferyW’s beautiful photographs (top and below).

I was browsing among various recipes for green beans and noticed a call for Chinese five spice in one of them and wondered if I had the ingredients to make my own.  Yes!  –  or at least close enough for my purposes.  I looked over several recipes and they all had the same ingredients with a few variations:  Star anise, fennel seeds, cinnamon, cloves, and peppercorns.  Some used Szechuan peppercorns and others called for the more familiar black peppercorns, one recipe used cassia bark in lieu of the cinnamon, there were differences in the ratios so I just eyeballed mine as I loaded them into my little spice grinder.  I ended up with about a quarter cup of some great smelling stuff.

Those are the Szechuan peppercorns between the cinnamon sticks.  They have an interesting effect in the mouth, some heat and a numbing sensation on the lips.  Another name for them is prickly ash seed.

After all of that, I used about a teaspoon of the spice powder in the soy sauce marinade of the chicken for the green bean dish pictured above.  That was a simple enough recipe, the most prep went into the sauce: 1/2 cup soy sauce, 1/2 cup chicken stock, a tablespoon of sesame oil, a tablespoon of ginger garlic paste, a tablespoon of honey, and a tablespoon of rice vinegar with a little corn starch to thicken it in the pan.  I steamed the beans for five minutes while the chicken was cooking then added them to the pan with the chicken and then poured in the sauce and cooked until it thickened, a few more minutes.

That’s if for this week. No Bixby update, but he’s doing great, each day he surprises me by what he learns and understands. My little black kitty, Missy has to have surgery next week, so good thoughts would be appreciated. Thanks and have a great weekend – TaMara

Recipe from NOLA Cuisine.  Give his place a look, y’all.

I needed more of those fried tortillas.  They are semi-crisp, some crunch but they fold over the filling easily for transport between plate and maw.  I could have shredded some cabbage to add to these but I was in a hungryhurry. 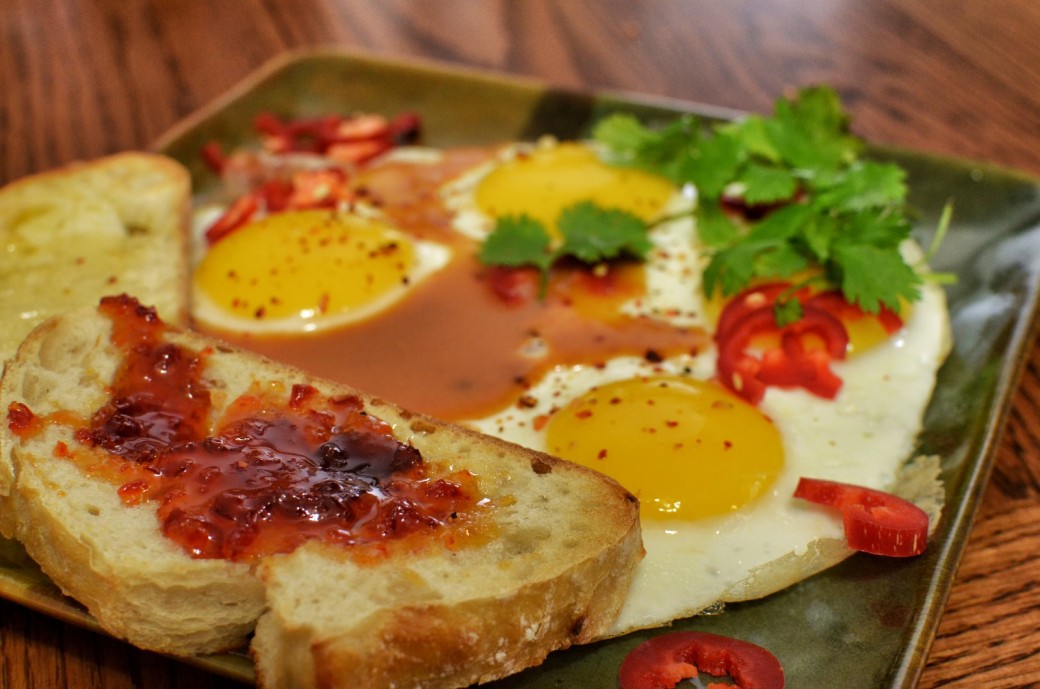 When I was searching through online recipes for habanero sauces I found one that looked pretty good but I passed on it because I was set on making one with fresh fruit.  That sauce was very good but it just didn’t seem quite right for pork sammiches.  Well, I harvested another dozen or so ripe habs the other day and went back to that other sauce:

Put everything in a blender and liquify.  I filled an empty salad dressing bottle with some and froze the rest in an ice cube tray.  Pop out the frozen cubes of sauce and bag them. 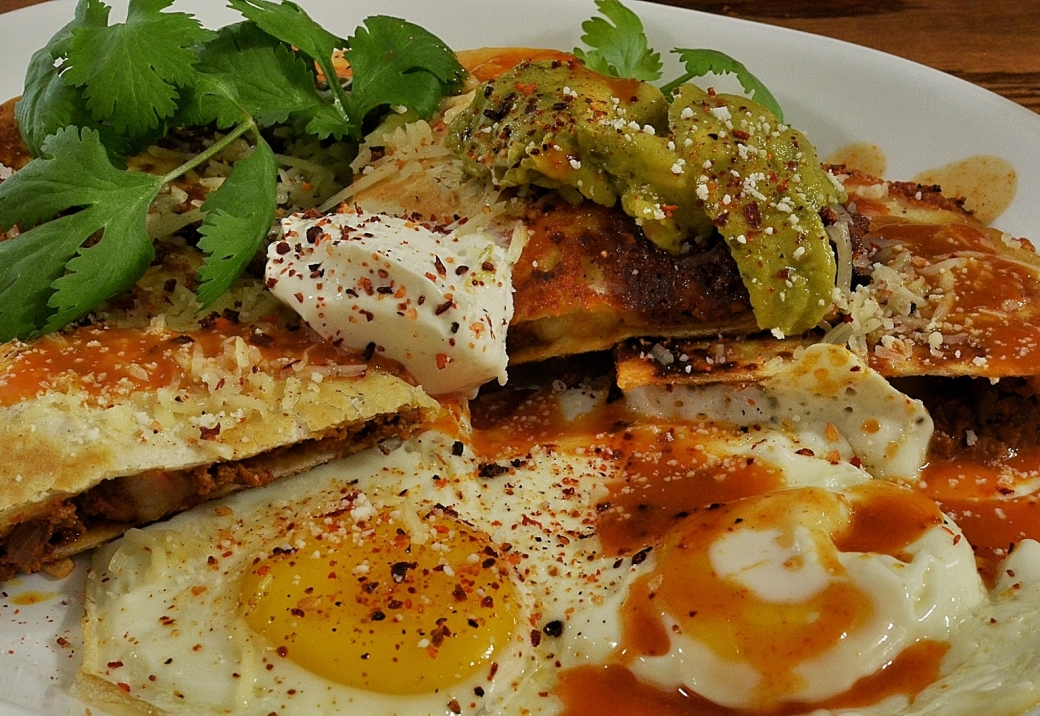 Chorizo and Monterey jack in the quesadillas, garnished with guac and sour cream, the Tex-Mex seasoning I like, a wee sprinkle of cotija cheese and more of the Monterey jack.  Gotta have eggs and hot sauce.

Looks like it will rain all day.  We were needing some.  I have a pork shoulder in the smoker.  I set up in the garage and now it’s pretty smokey in there.  It would be setting off alarms if there were any in there.

On a bed of fried tortilla wedges with a sprig of cilantro, fresh jalapenos slices and Monterey jack for garnishes, and a liberal dose of Cholula hot sauce.  Alas, I plated the eggs under the chorizo, displaying poor planning for the picture.  I will give you another!