There is no getting around the fact that leftover lasagna is better than when it is warm from the oven on the day it is made.

I had some frozen tenderloin medallions so I stuffed them with leftover dressing and served them with bean casserole.  I had a can of those Libbey fried jalapeno slices that added a benign twist to the classic recipe.
Yes, we still have some gravy left.

We’ve enjoyed these stuffed sweet potatoes so much that we look around for different things to stuff them with.  Thanksgiving leftovers work pretty well.  This one has turkey, dressing, cranberries, and gravy. 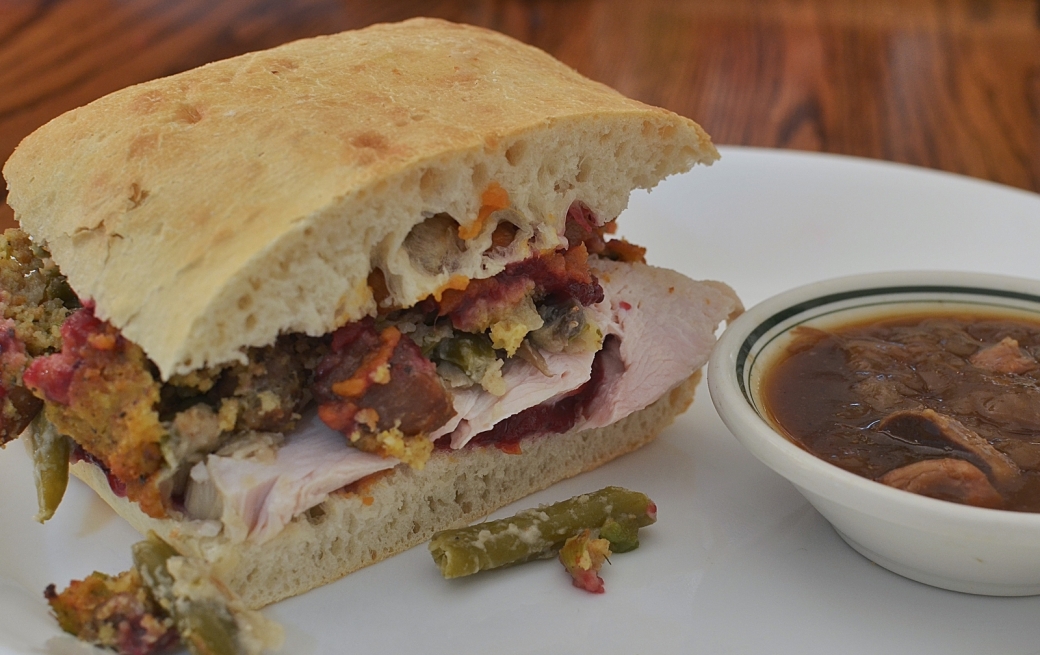 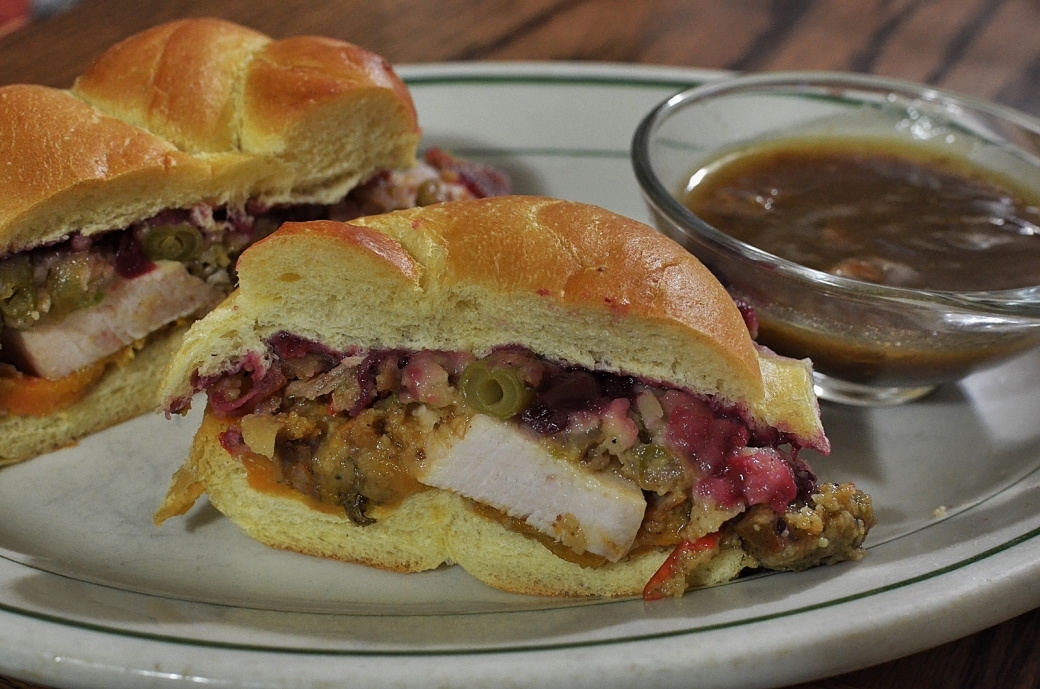 I nearly dropped the whole stock pot last night while carrying it down to the basement fridge.  I did slop a pint or so out onto the stairs but they cleaned up well enough, just bare wood – no carpet.  I brought it back up this afternoon and ladled out portions to freeze, and brought the rest to a boil for the dumplings.  Simple rolled dumplings: flour, salt, baking powder, lard, and milk enough to moisten.  These could have spent more time simmering but they were close enough done to eat.  I stirred in a can of cream of celery soup just to get that can out of the pantry.  I bought it long ago for an abandoned project, long enough ago I don’t remember what I had intended for it.

Not much going on around here.  The gardens grow and the rain comes and goes.  I’ve managed to keep up with the mowing and I am ahead on the roasting of coffee. 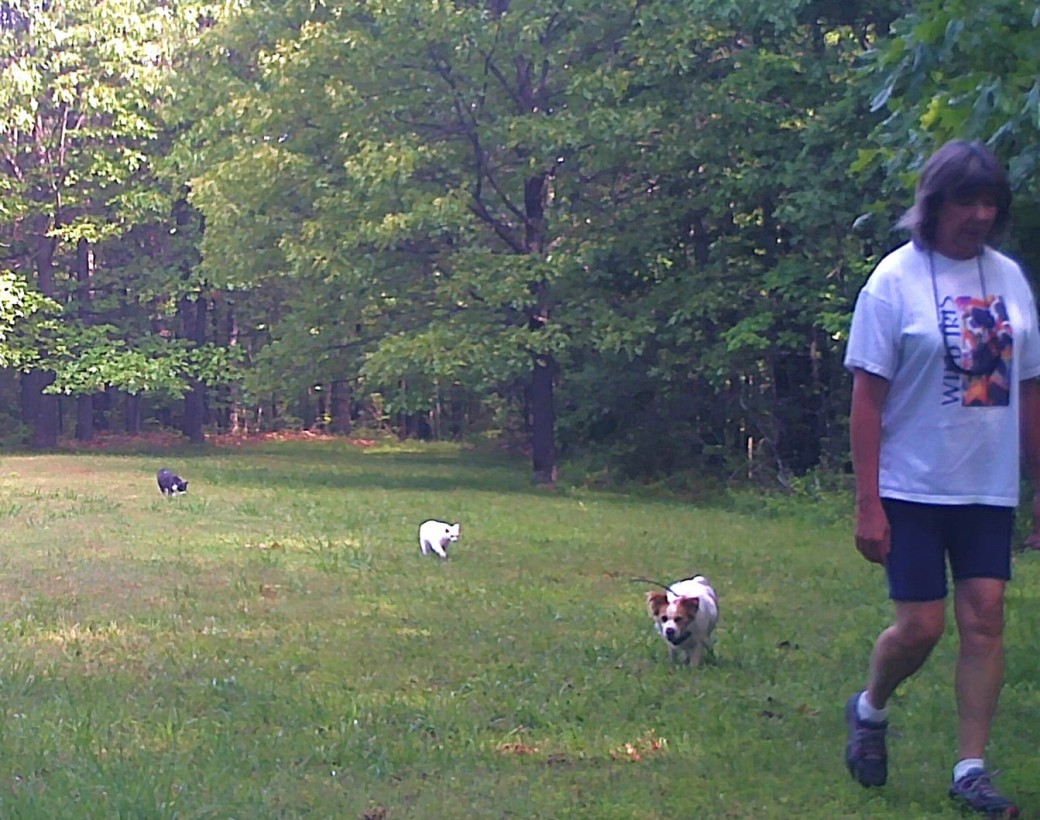 You may not be able to herd cats but they will follow a leader.  When they feel like it. 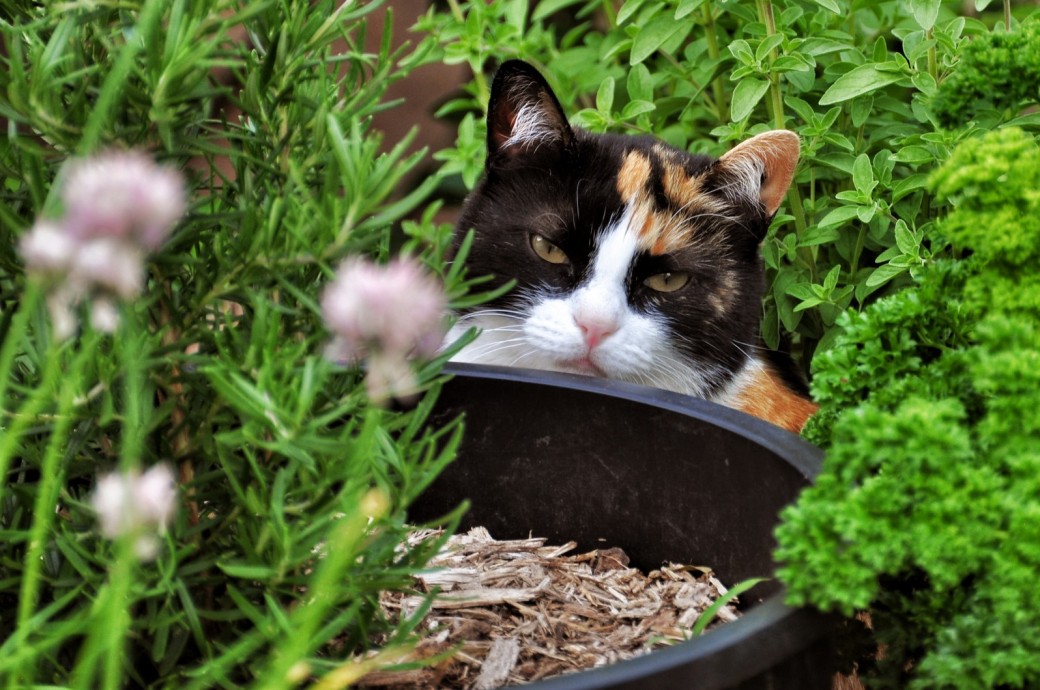 Bitsy likes to hang out with the herbs.  These are on a bench on the patio out front.  I suspect it’s the bench that is the attraction rather than the rosemary. 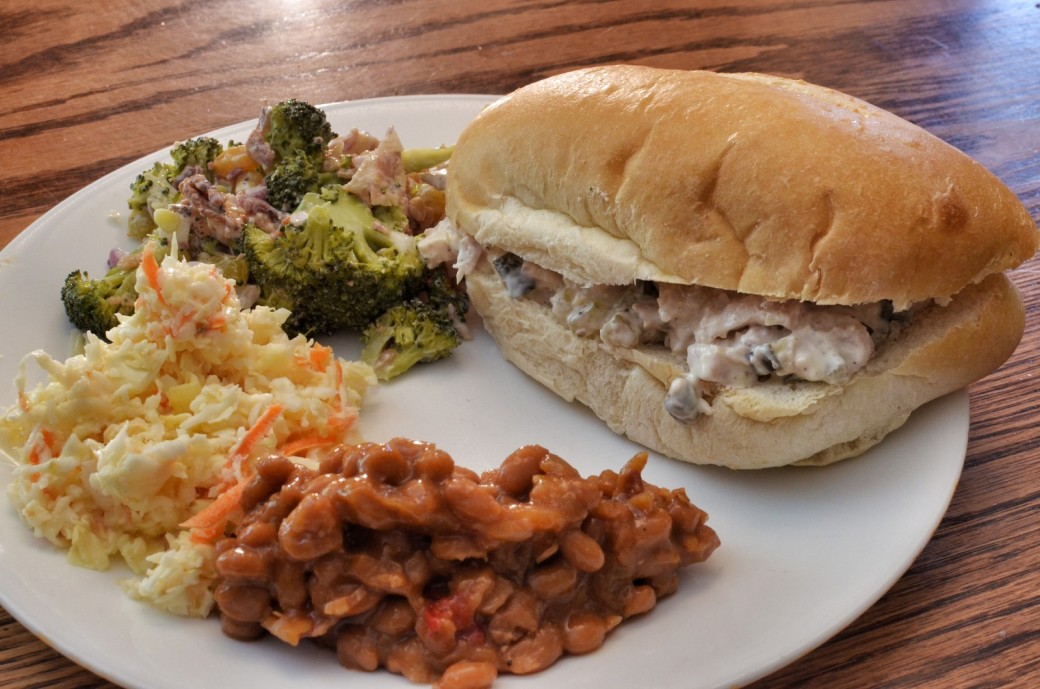 We left the Memorial Day picnic laden with leftovers.  The beans were a big hit but the broccoli salad wasn’t.  I chopped the two big chicken breasts the host sent us away with and made chicken salad from one and combined the other with bbq sauce.  This is a leftovers lunch I made the next day with some of the chicken salad. 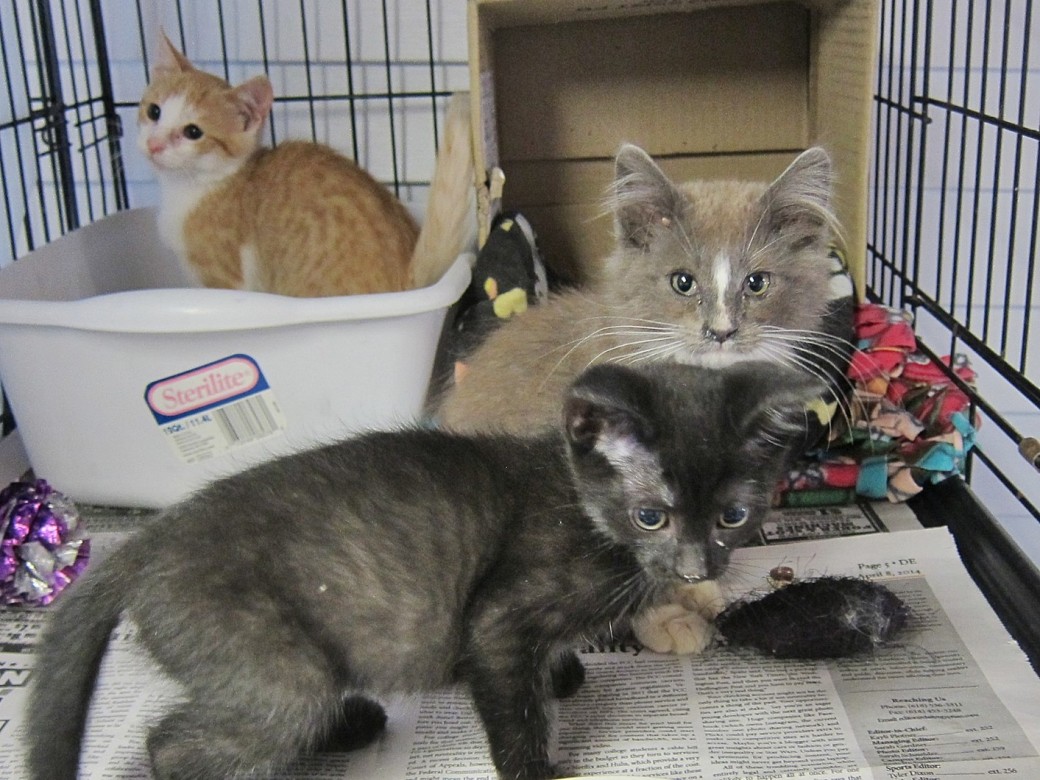 This post needs mozr kittehs!  Here are three that have recently come in to the shelter.  I know next to nothing about them.  Mrs J is doing her shift at the shelter today and will probably come home with more pictures. 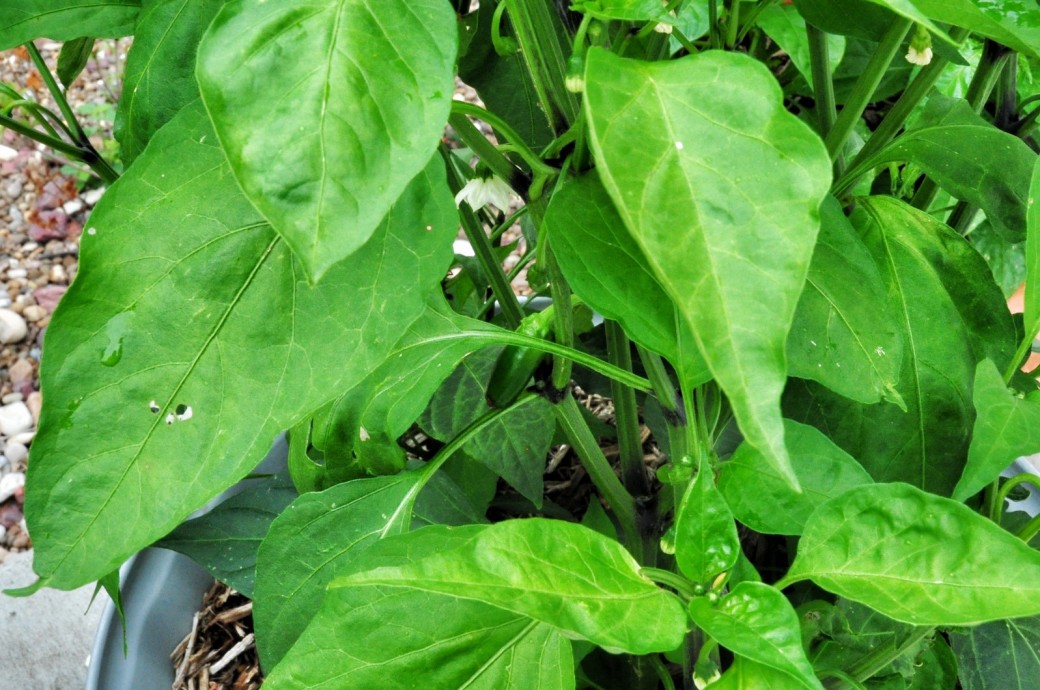 The first jalapeno!  My pepper garden on the patio is finally producing actual peppers.  The Anaheims are doing well: 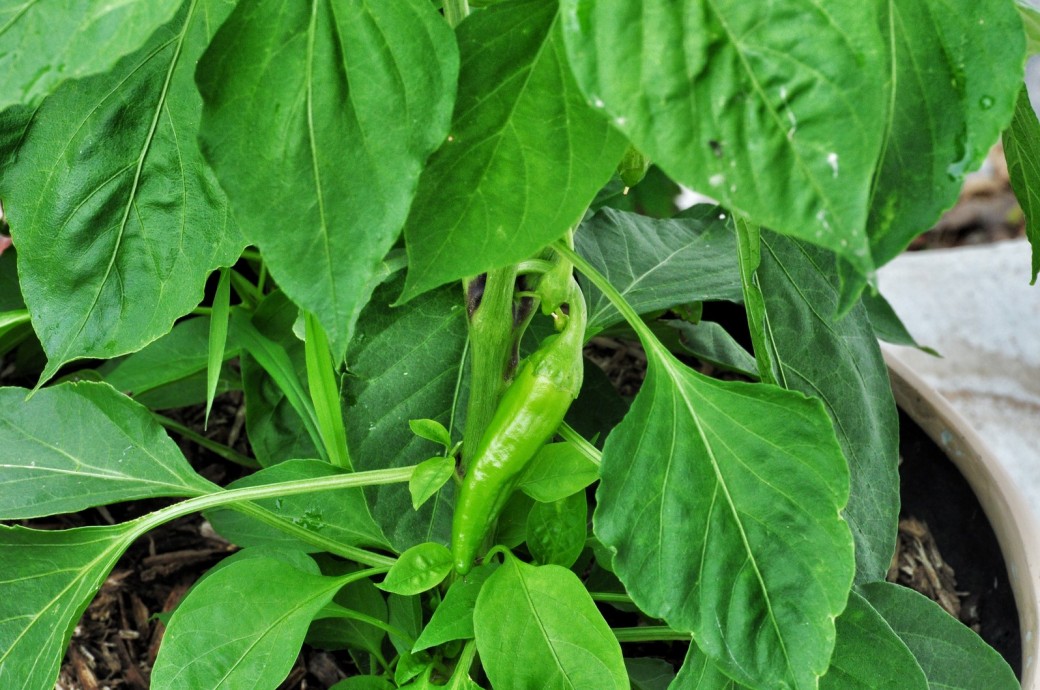 I have a tiny cayenne, and the serranos are coming on fast.  I have a couple pots of those petit sweet peppers that come in several colors but so far only flowers. 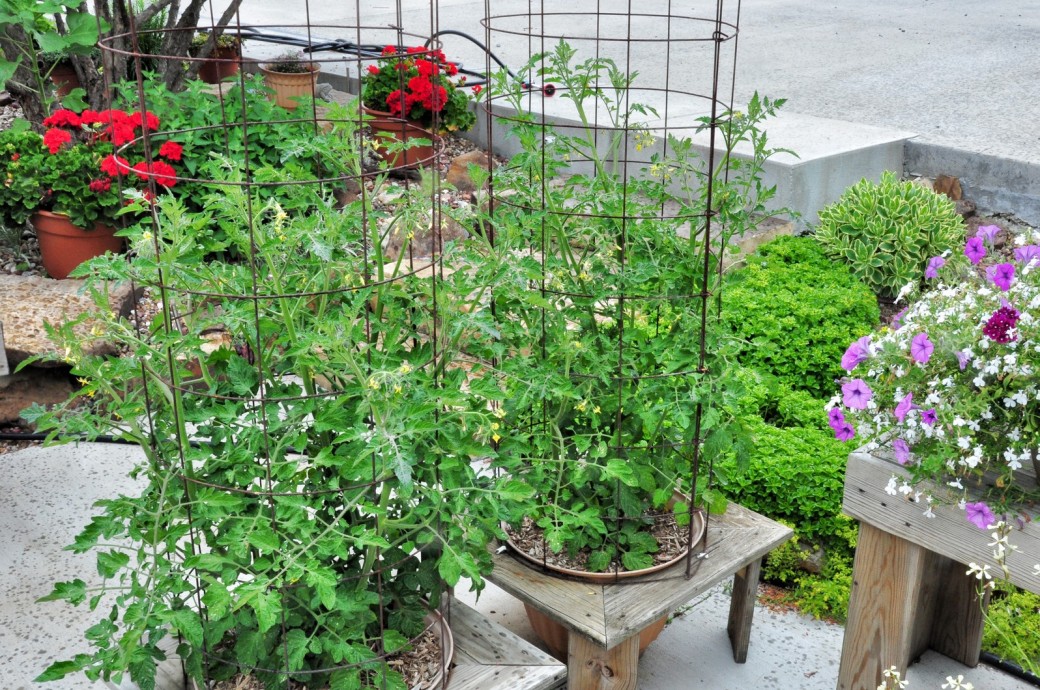 The cherry tomatoes are vigorously producing flowers and there are quite a few marble sized green tomatoes but only at the bottom.

It’s still chilly here, though the Arctic blast has moved on. I decided to use up the leftover turkey and test out my new mandolin at the same time and make a big pot of soup for lunches this week.

When I roast a turkey, I always save the wings and legs, freezing them for soup later on.  You can also save the carcass, which I do sometimes, but really most times it seems like too much trouble.   You can also freeze leftovers, but I find dark meat works best because the white meat tends to get tough once it’s frozen, even when simmered for hours in soup.

You can add anything you want. I didn’t have beans, so I substituted whole wheat egg noodles. I cook them separately, so they don’t get too mushy and add them to the bowl and pour the soup over them.

In a large saucepan, add turkey, broth and water.  Bring to a boil and let boil 10 minutes.  Reduce heat and add remaining ingredients.  Let simmer for 20 minutes, remove legs and wings, let cool enough to remove remaining meat (most will have fallen off).  Add meat back to soup and let simmer another 10 minutes.  Remove bay leaf and serve with Buttermilk Biscuits and Cranberry Sauce.

*Cannellini beans are large and have that traditional kidney shape. With a slightly nutty taste and mild earthiness, they have a relatively thin skin and tender, creamy flesh. They hold their shape well and are one of the best white beans for salads and ragouts. 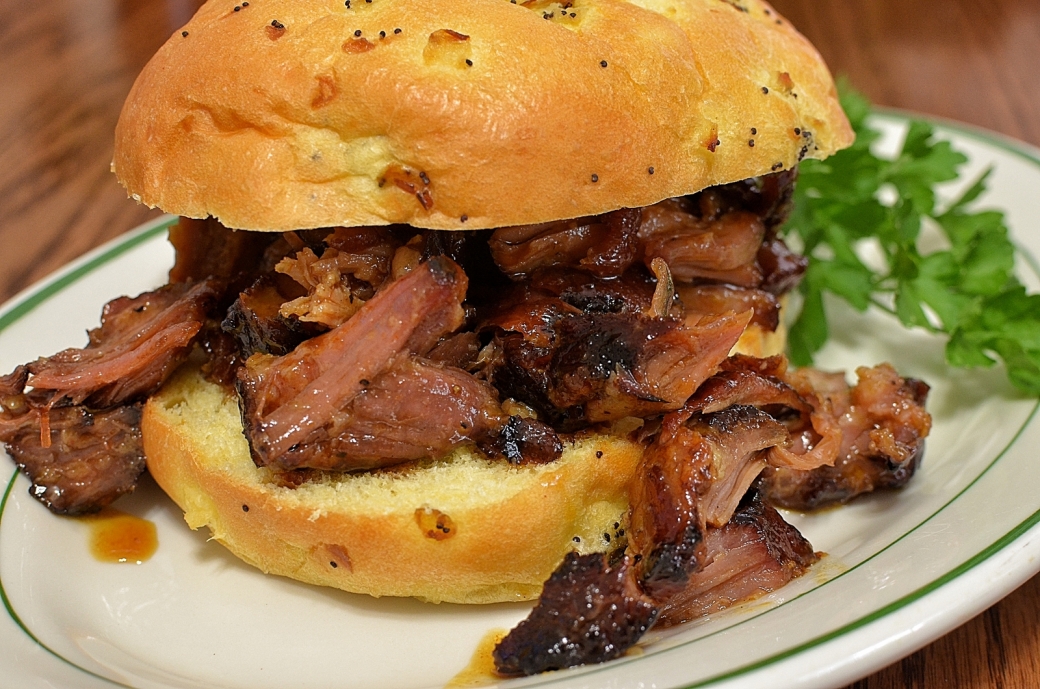