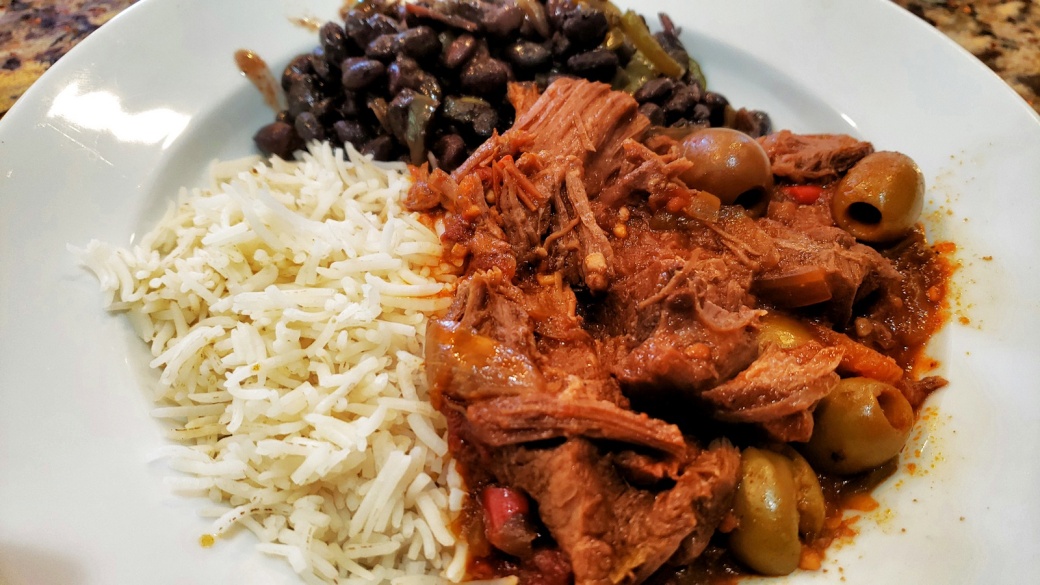 This isn’t as colorful as it would be if all the peppers and onions had not been pressure cooked with the meat from the beginning.  It’s an InstaPot dish adapted from this bon appetit recipe.  I used the rest of a big flat iron steak that I used for the beef and broccoli stir fry a few days ago.
Not that I have any experience with traditional Cuban cooking, but the black beans and the rice are considered to be a requirement for this dish. 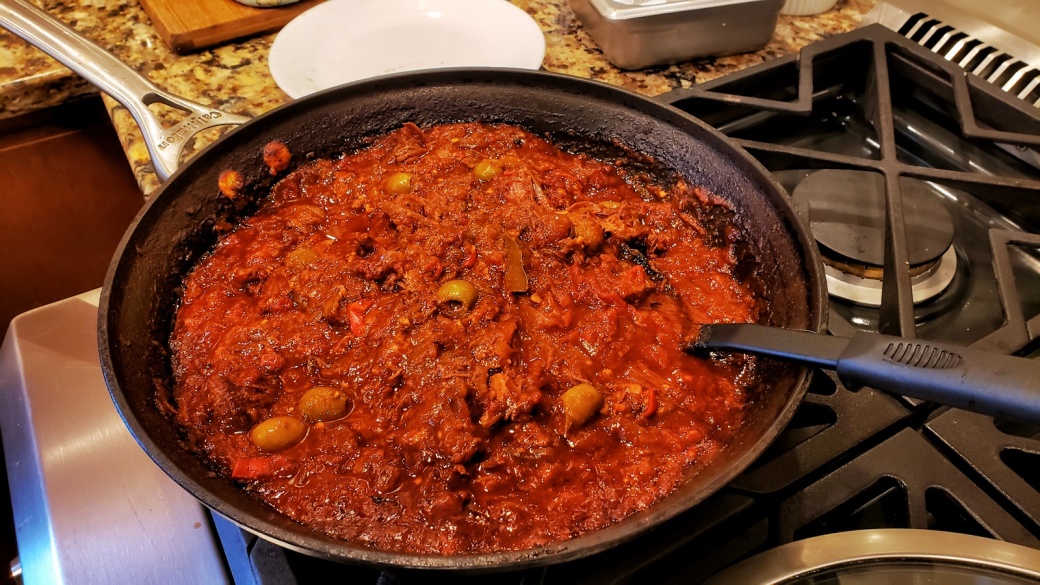 I transferred it to the stovetop so I could reduce it, it was a bit thin because I had used a full quart of my canned stewed tomatoes because they were put up with quite a few peppers and onions.  The recipe calls for pimento stuffed olives but I didn’t have any on hand.  Should have sliced them in half, though.
I gave the ropa a full 60 minutes in the InstaPot, and then another 30 because my flat iron steak wasn’t yet ready to shred.

In keeping with the spirit of Gumbo, this one has leftover smoked pork, some beef in its own stock, crawdad tails, and shrimp.

I’ve seen this dish mentioned all over but have never  had or made any.  Of course, we didn’t have one of the main ingredients, garam masala.

But I did have all of the stuff this recipe mentions.  I had to run the spice mill for the coriander and cardamom.  I’m the last person to opine on Indian cookery but the way I take it is that there is no one recipe for the spice blend.  Lots of regional and individual preferences, I didn’t do a deep dive into it.

The allrecipe folks had a butter chicken recipe, too.  I kept fairly close to it but subbed sauce and tomato bits for the puree. I did the chicken, using both breast and thigh, in batches.

Here the chicken has browned and is cooking down in a good splash of the tomato mixture.  I added the browned and sauced chicken to the simmering pot, covered it, and started some rice in the cooker.

It simmered for about an hour, the recipe mentions cornstarch to thicken but I didn’t think I needed any.

This cried out for naan, I made tortillas do.  This is an easy and delicious dish.

I spent a little time looking at recipes for using up peppers.  I ran across one called stuffed pepper soup. I usually look at several recipes to get an idea of the range of possibilities and ended with one that used half ground beef and half Italian sausage.

I had several Anaheim peppers I needed to use.  They have a thick skin so I roasted them to help get those off.

Let the roasted peppers sit in a bowl for 20 minutes, covered, and the skins will come off easily.  I do it over a bowl full of water to help with the removal.

I picked a couple of nice green bells, and chopped them, the roasted Anaheims, and a big sweet onion.

Chop a couple of cloves of garlic while you are at it.

Brown the meat, spoon out excess grease, and add the peppers and onions, cook until they are soft – 5 minutes or so.

I added a quart of the tomatoes I stewed and canned last year, a can of tomato sauce, and 3 or 4 cups of chicken stock.  I seasoned with granulated onion, granulated garlic, dried herbs like basil, marjoram, thyme, oregano, and a few bay leaves.  Salt and pepper to taste.

It’s good over pasta, too.  This recipe was received with much enthusiasm around these parts.

Yummy photo by the great JeffreyW

I have used my Multi-Pot consistently for the last few weeks. I made two batches of soup, pulled pork, pasta sauce and two batches of rice. The first batch of rice I was all cocky and used the simple pressure cooker setting and my own time – because you know, I’m the Queen of Pressure Cooking – well, that didn’t turn out very well. I mean, it was great sticky rice, but I was going for light and fluffy. So the next batch I used the Rice Button! I mean, come on, a pot you can just push RICE and 10 minutes later have fluffy rice – why was I fighting it??

The buttons on this brand are easy and intuitive to use. It does help that I’m familiar with what times work well with my stove top cooker and there are good resources in the booklets that came with the machine to help pick timing.

My first batch of soup was to make Beef with Barley Soup:

I used this recipe (click here). I was excited to try out the browning feature and the pressure cooking setting.

I quickly and easily sauteed the onions and browned the beef with about a tablespoon of olive oil. Then added the remainder of the ingredients, sealed it shut and turned it to the Meat/Stew setting and set it for 30 minutes.

It took it 10 minutes to come to pressure – which didn’t surprise me because I filled it to the highest mark allowed.

The soup was delicious – I could easily leave it on warm, open the lid and let sit and fill the house with yummy soup smells as long as I desired.  It was good and tasty. And clean up was a breeze – just tossed the insert into the dishwasher.

The one part of this electric pressure cooker that has been a learning curve for me is the quick -release method. I am so used to taking the pot over to the sink and running cold water over the top. With this, they say to just turn the pressure valve to open. Which sounds easy-peasy.  EXCEPT it spews greasy, starchy steam all over my kitchen cabinets.

The solution is fairly simple – I grabbed an old kitchen towel and cover the valve with that as it releases. Takes a bit longer, but no mess and no risk of a scary steam burn.

So for this recipe, I’d give the Multi-Pot a solid A.

I know, I know I promised a puppy update…give me a few minutes. Until then… 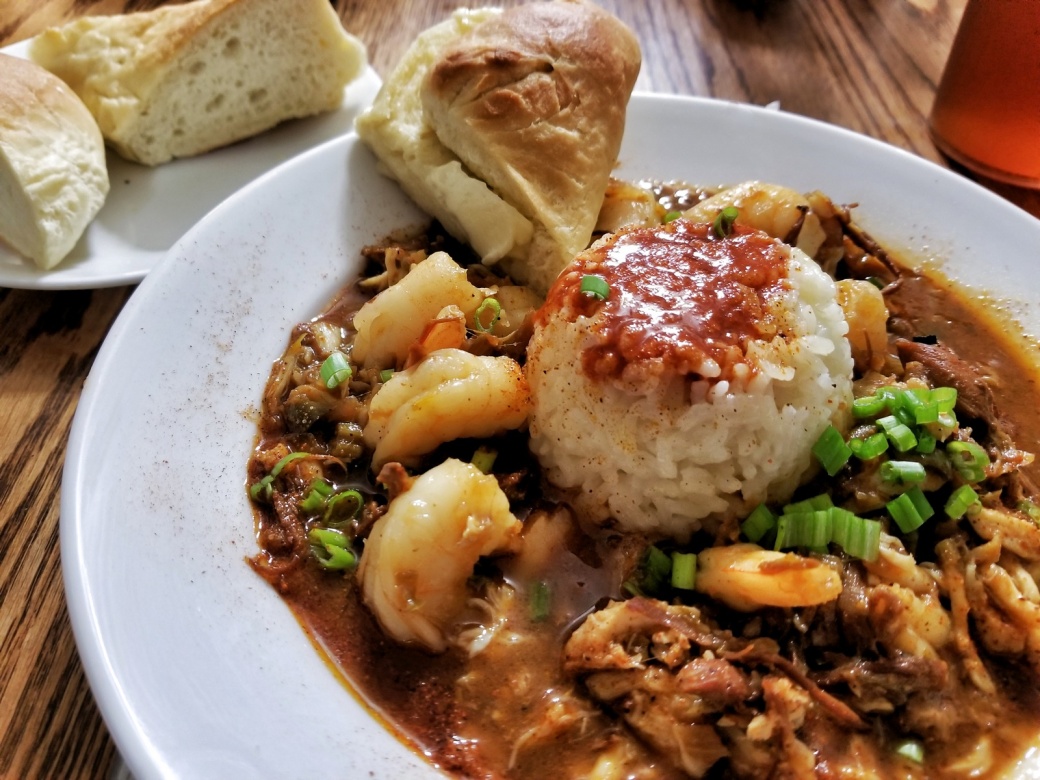 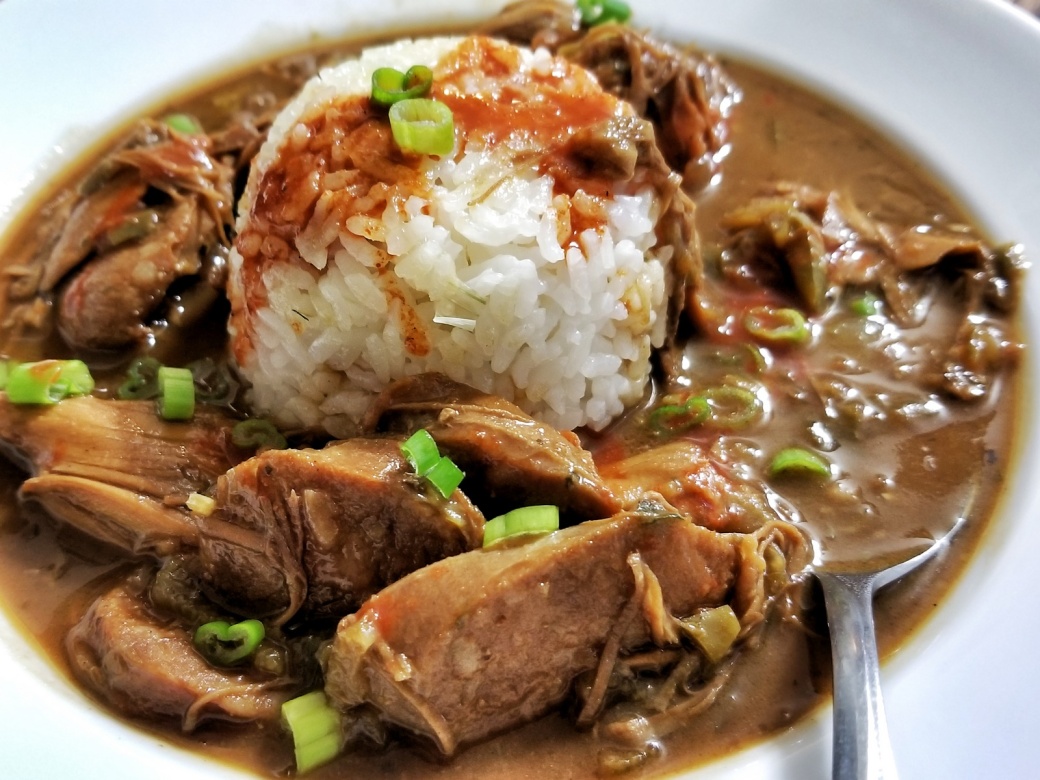 I’ve been growing these in a container in the patio garden.  They are green bell peppers in all but name – I’m not sure what the tag said.  I managed to stuff about a tablespoon or so of my Italian beef/rice filler into each one.

They are cute as can be!  Here they are after blanching.

I went with cooked and crumbled Italian beef mixed with rice and some stewed tomatoes.  Actually, I started with the stewed tomatoes – Mrs J delivered a dozen or so ripe ones that I de-skinned and boiled down with onion and jalapeno peppers.  We had a regular sized green pepper in the fridge so I made sure to make enough stuffing for it, too.

Mozzarella made the perfect topping, I cooked them side by side in the toaster oven, the taller pepper browning better than the minis.  Since the filling was already cooked, they just needed enough time in the 375 degree oven to make the peppers tender. 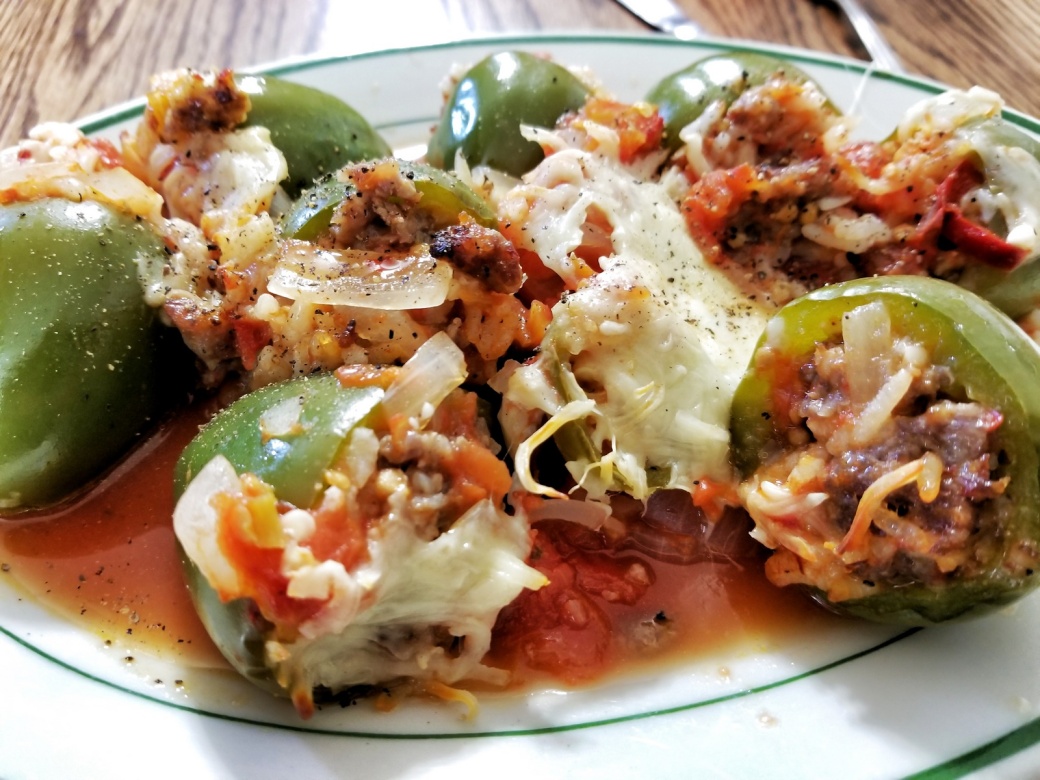 Each one was two bites and gone – note that they have relatively thick skins compared to other small peppers.