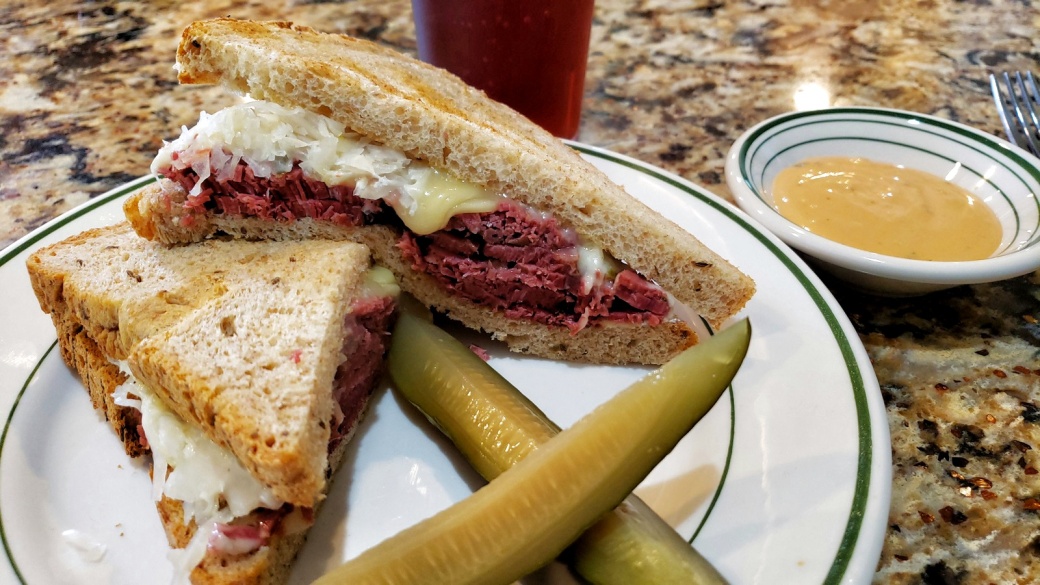 Fill the machine as per recommend practice (usually add liquids first and flour last except sprinkle the yeast atop everything) and hit start.

I generally make a pile of corned beef in a skillet, top it with cheese, and add the sauerkraut last.  Splash in some water or ‘kraut juice, cover, and heat on medium until the cheese has melted.  We like ours on lightly toasted rye but I’m not sure the reuben referees will necessarily deduct points for un-toasted bread. 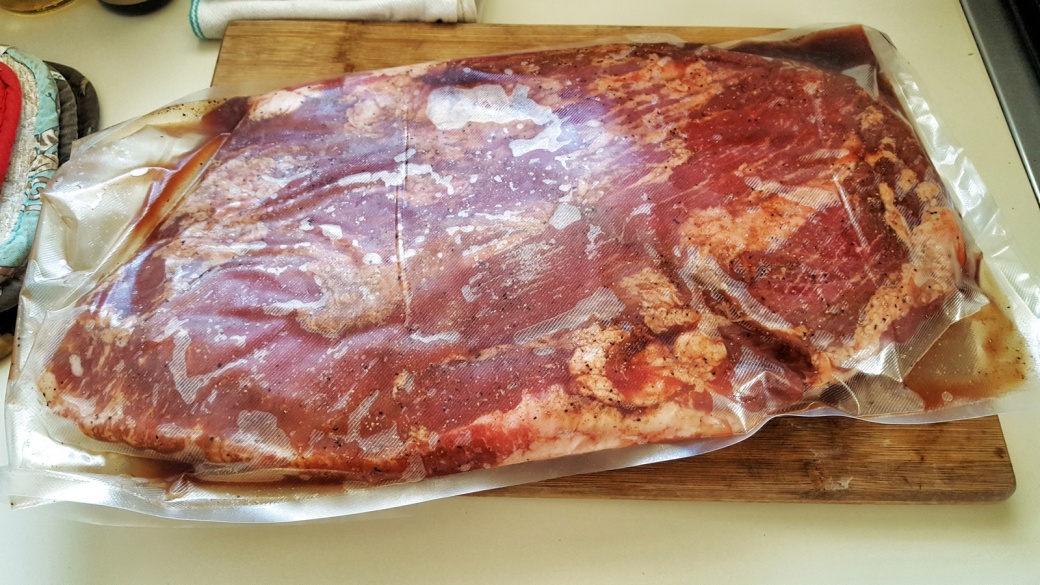 I used a vacuum sealing bag to corn the brisket.  Morton’s Tender Quick plus various spices made up a dry rub that was spread on both sides before sealing.  I gave it a week before removing the meat, rinsing the excess salt off, and resealing in another bag. 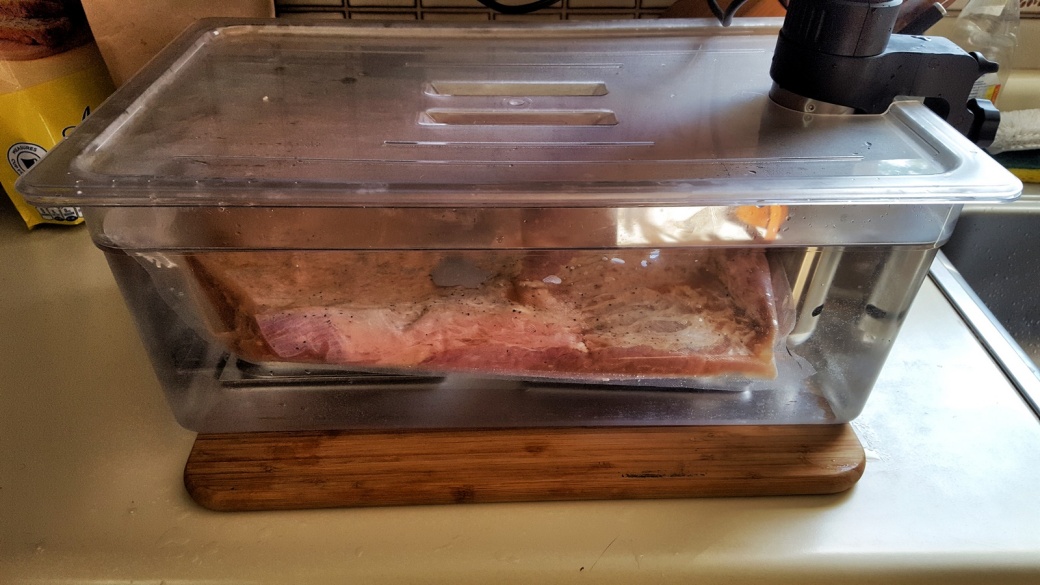 I was shooting for 10 hours at 180 degrees per a recommendation by  J. Kenji López-Alt at The Food Lab.  He does a lot of good work over there and I highly recommend the site.  Alas, the bag appeared to be failing in that very hot water bath after a few hours so I pulled it out, cut it in two, and resealed for another go at a reduced temp.  I let it go overnight at 155 degrees, and fared much better. 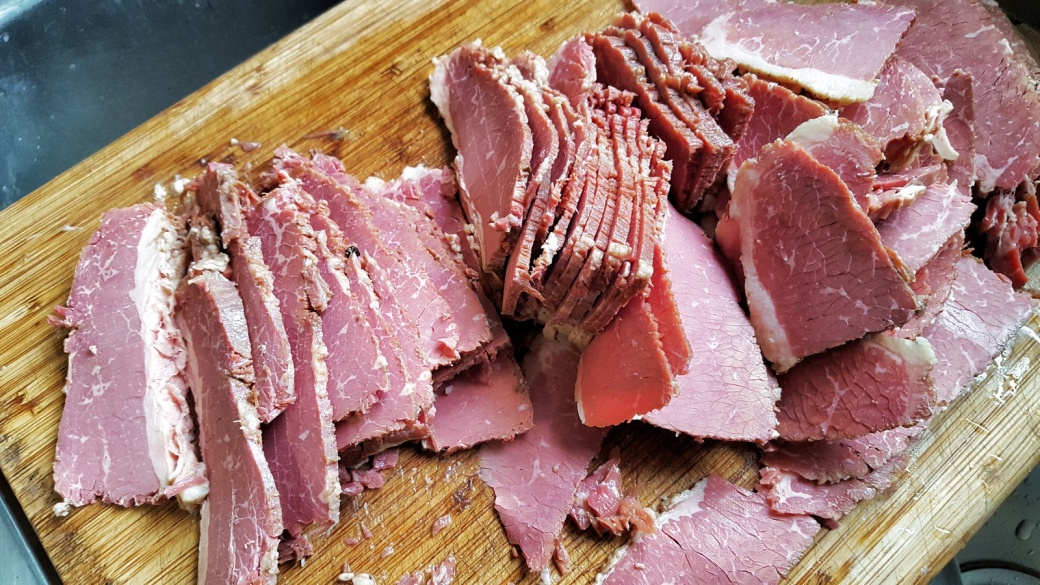 This is one of the halves after a day in the fridge to firm it up for slicing.  I think the other half will go to the freezer in the same bag it cooked in. 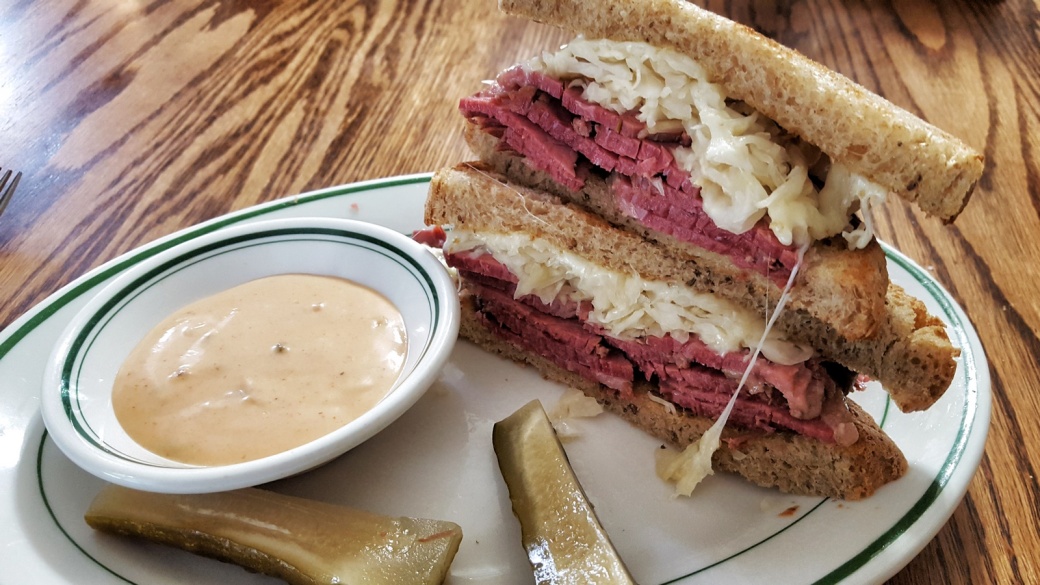 I need a recipe for thousand island dressing – that’s the only thing on the plate I didn’t make, bake, ferment, or pickle. 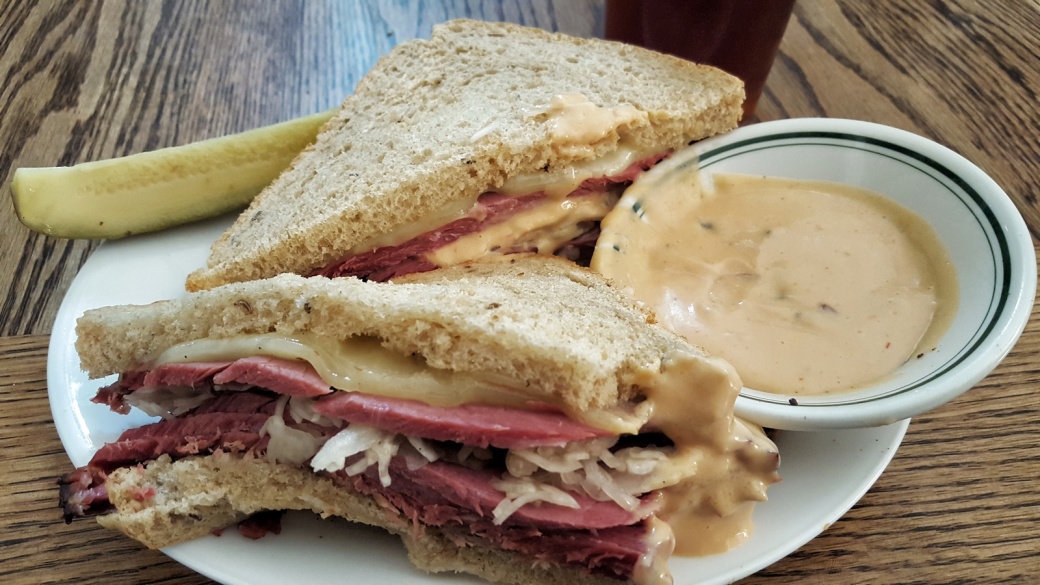 Here’s a nice reuben sammich on rye that was made in our bread machine.  It’s a fairly simple recipe that works very well every time for us.  I experimented a little by adding a tablespoon of molasses to this batch.  I can’t say I noticed much of a difference. 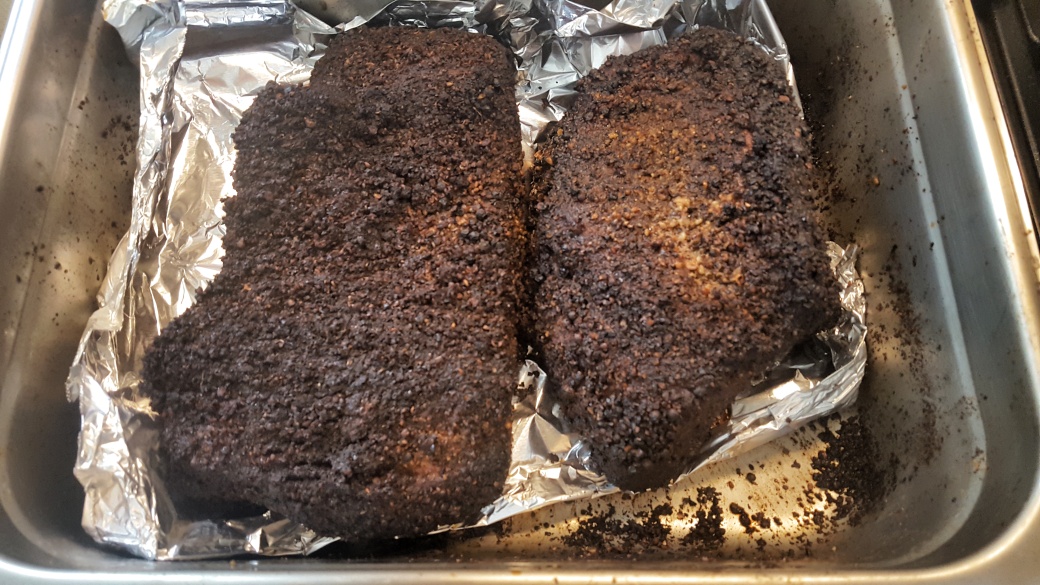 I picked up some corned beef while at the market getting those whole chickens to smoke.  We haven’t had fresh pastrami for a while and it seemed a waste to roll out the smoker just for the poultry.  I left it going after removing the chicken and replaced them with the corned beef I had rolled in a pastrami rub.  The pastrami seasoning is just my basic rub but with extra coriander, ground black pepper, and juniper berries.  The juniper berries are optional but I think they work well. 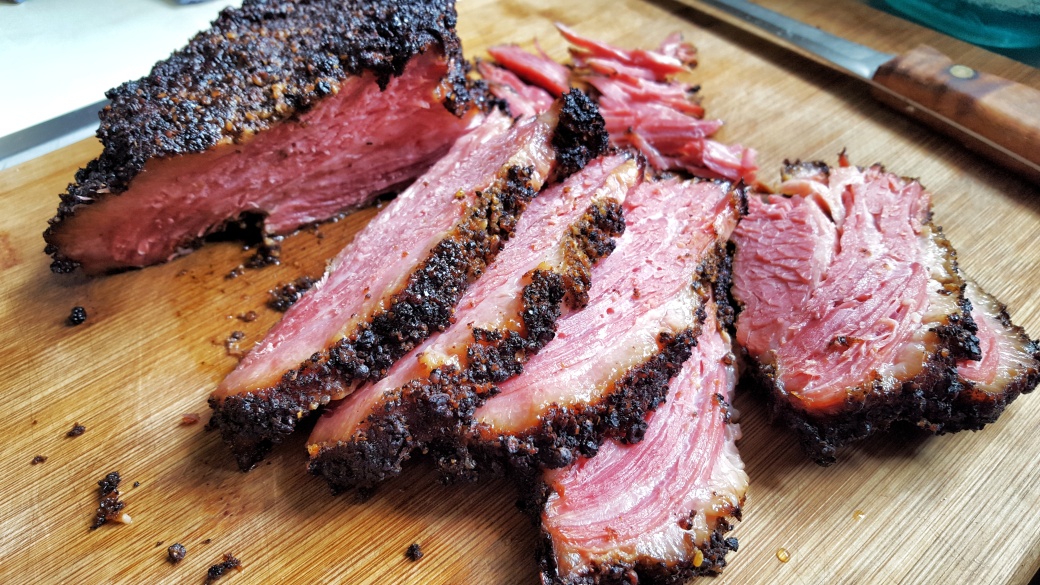 This one is sliced with the grain, exactly wrong!  Slice across the grain!  I salvage these slices by the expedient method of chopping them up. 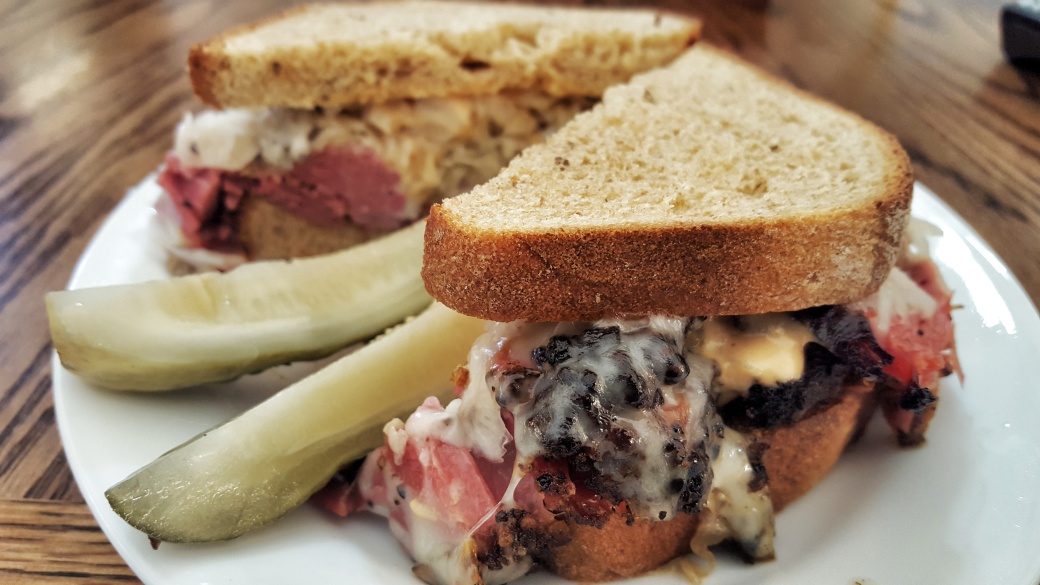 I like to pile the pastrami on a skillet and top with Swiss cheese and sauerkraut, add some sauerkraut juice to the pan and simmer it with a cover to melt the cheese. 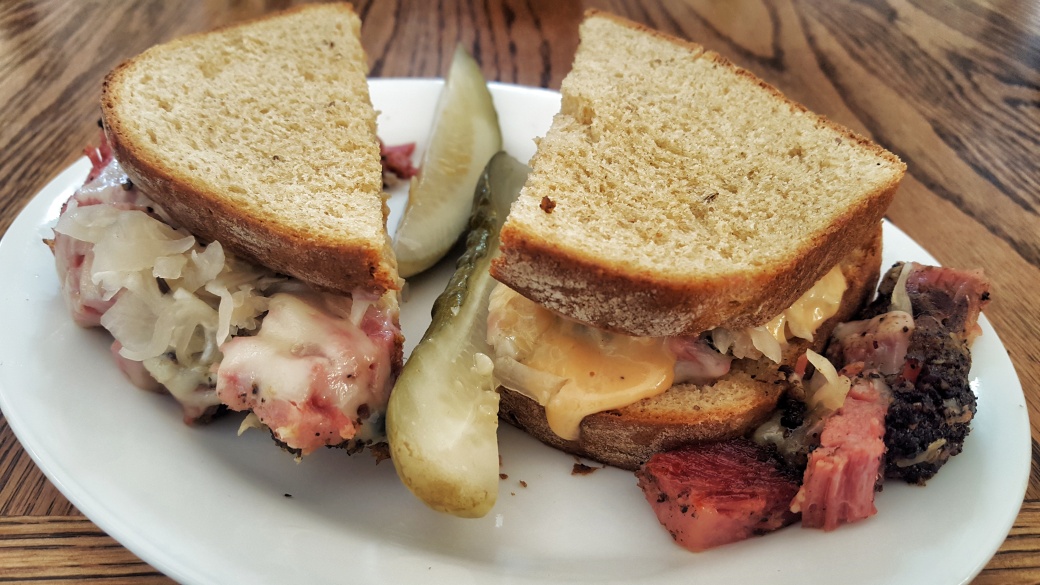 Scoop the hot pastrami onto a lightly toasted piece of rye bread and squeeze on thousand island dressing, serve with a pickle. 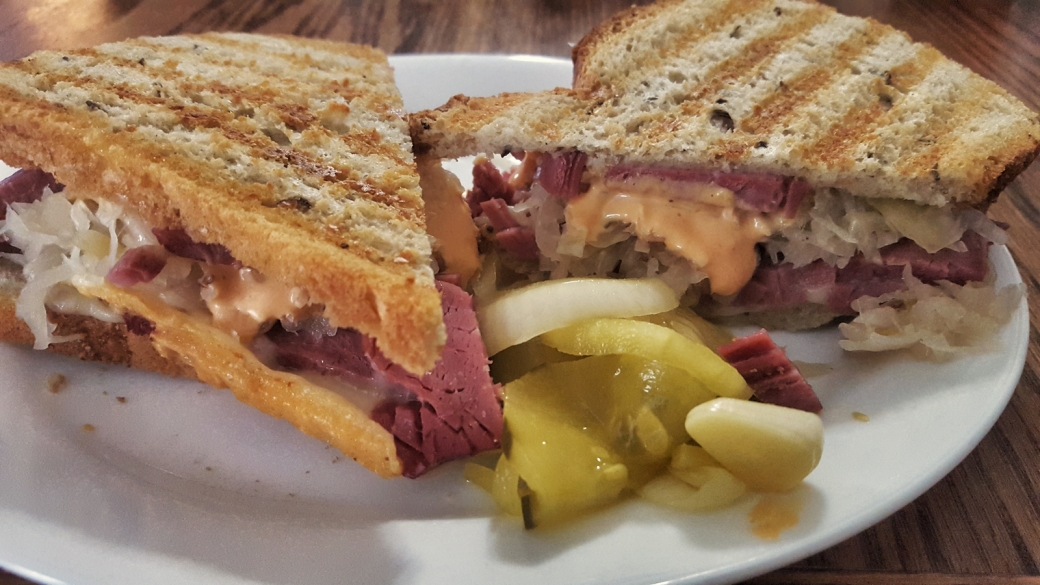 This is what I had in mind for the leftover corned beef from that corned beef and cabbage dinner.  I put the bread with the meat and cheese in the press to melt the cheese and toast the rye, adding the ‘kraut and dressing at the table. 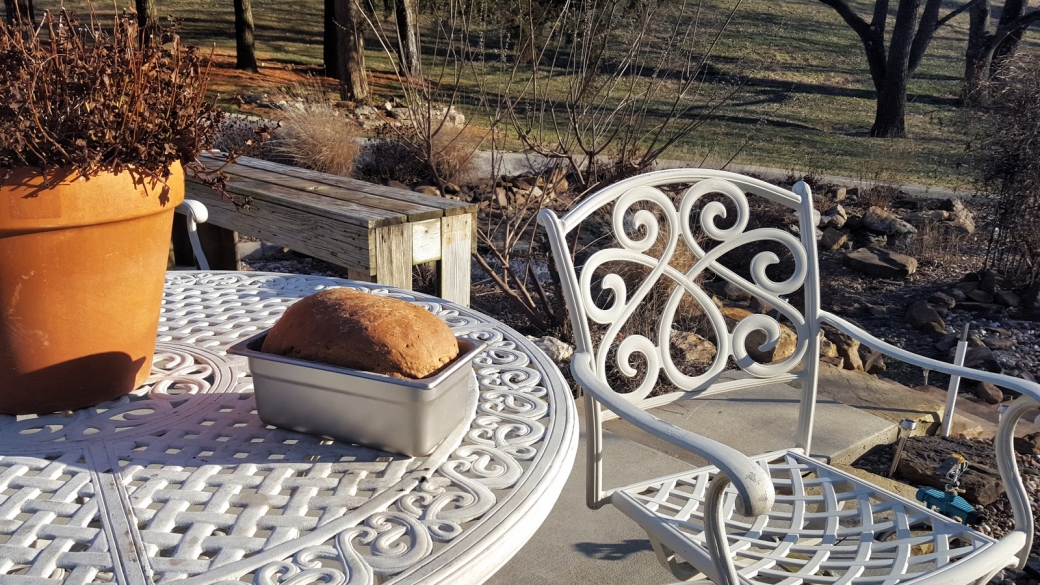 I put this photo up the other day as a riff on using the cold weather to cool baked items.  It’s a loaf of rye bread.  When it cooled thoroughly I wrapped it and placed it into the freezer until today.

A decent looking loaf!  I used it to serve up some reuben sandwiched for lunch: 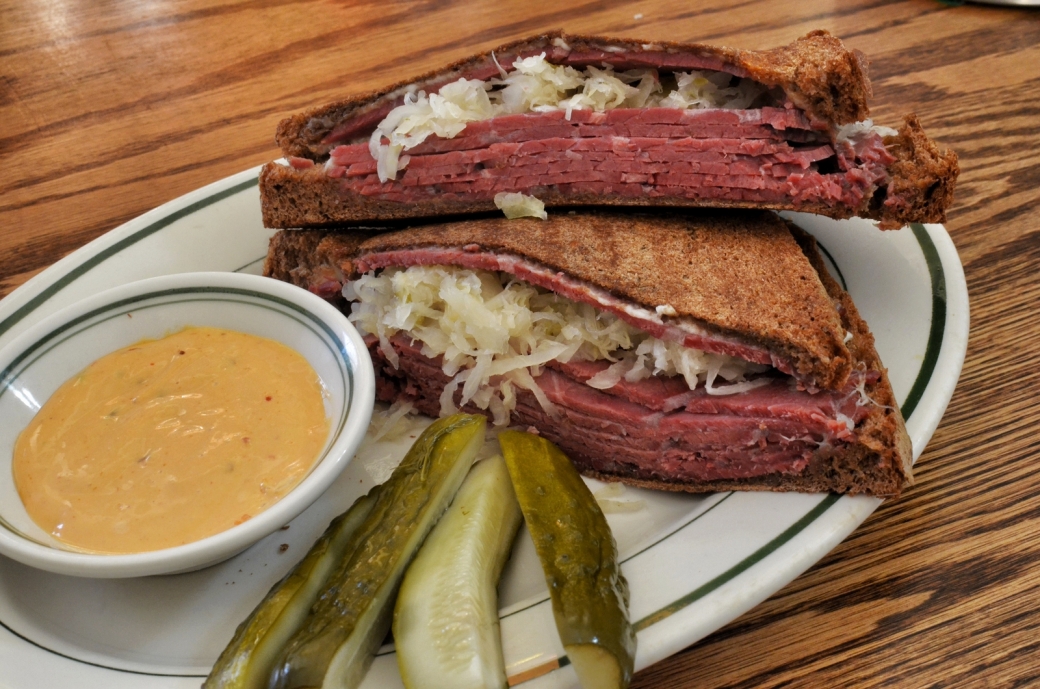 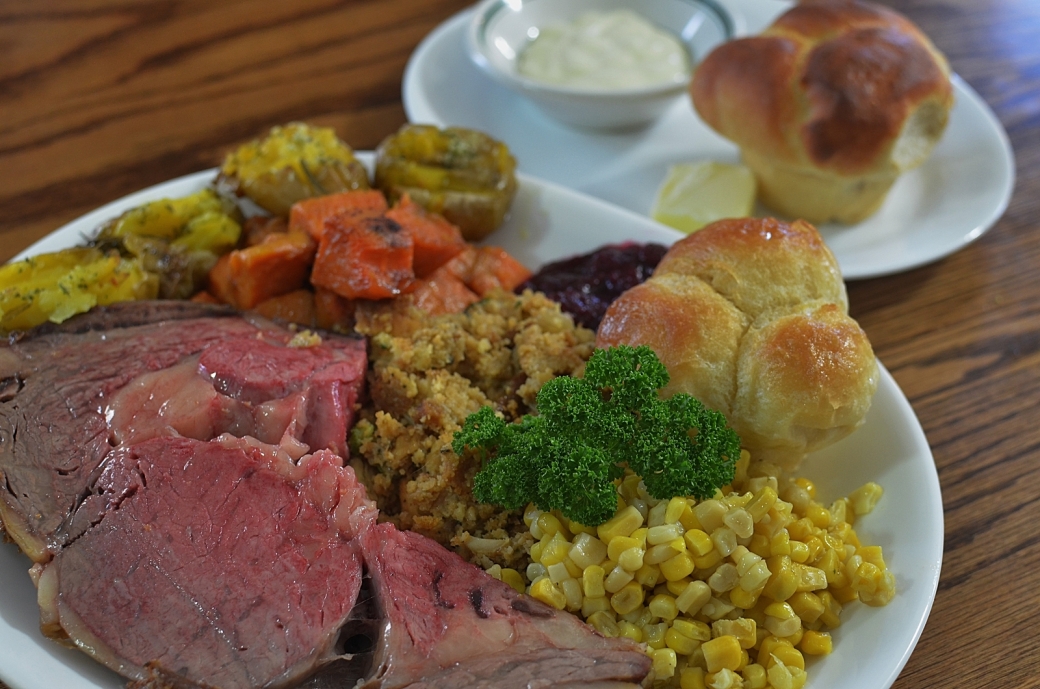 I suppose I should open with the Christmas Dinner – the rib roast worked out nicely for us and I’m tickled because it was my first time doing one.  We followed, loosely, the Serious Eats recipe, including the ox tail in red wine for the jus.  I’m a little bummed, I made a nice dressing to go with this and left it, forgotten, in the basement fridge until too late. 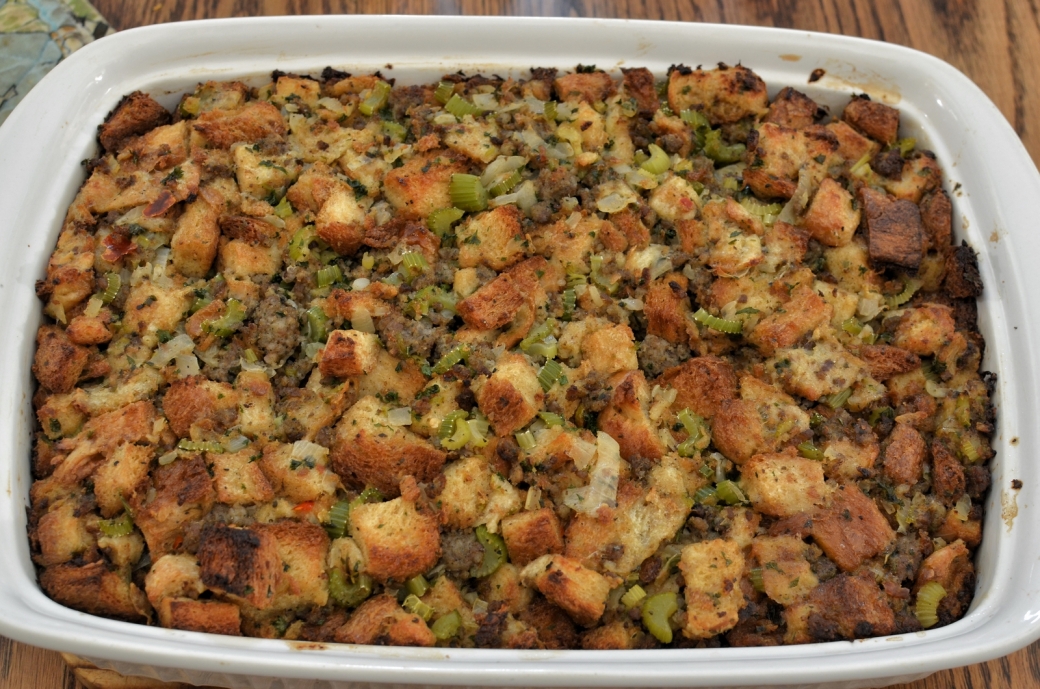 I went ahead today and cooked it, I’ll portion it out and freeze it, then vacuum seal it for later.  It, too, is a recipe from the Serious Eats folks.  I had even used my own patio grown sage for the seasoning:

I picked a paper sack full of leaves from the container plant and let them dry atop the freezer, a nice out of the way spot that stays warm due to the heat exchange system built into the walls of the box.  The food processor made short work of them, reducing the sackful to the not-quite-powder that they label as “rubbed sage” in the retailer’s spice rack. 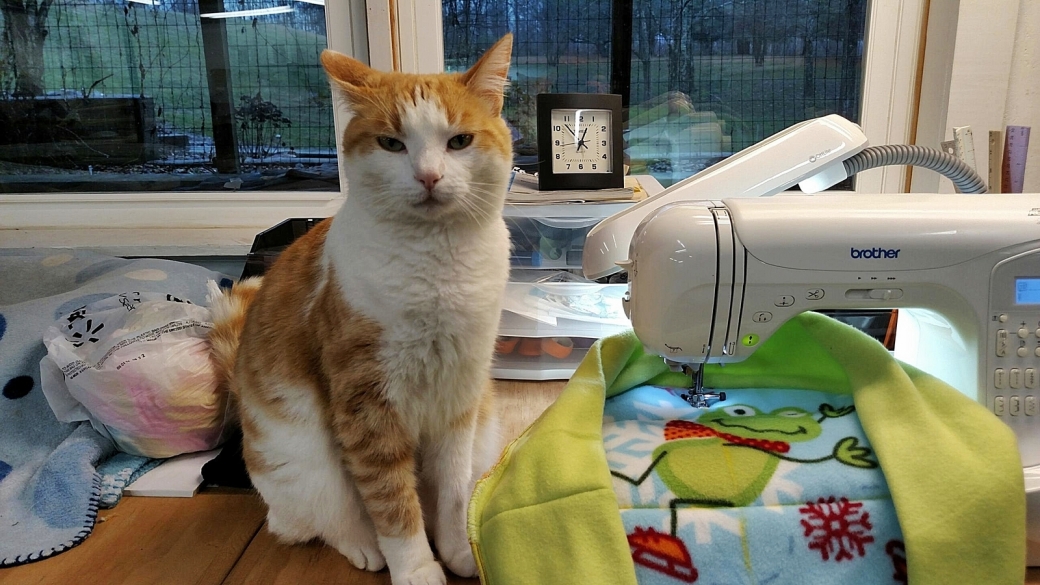 Mrs J took a snap of Ginger this afternoon, and it got me to searching for the pictures we took of him and his siblings right after they had been dumped at the neighbor’s house: 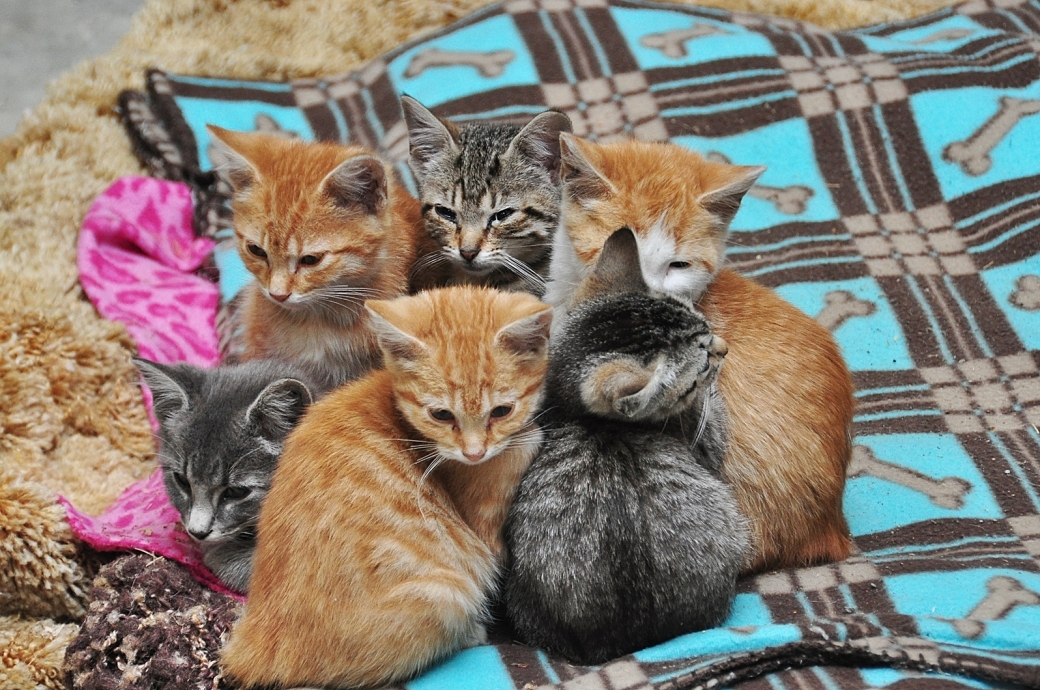 This was taken in October of 2013, they are Ginger’s litter mates but Ginger isn’t among them, we didn’t capture him until 3 or 4 days later – he had evaded the initial round-up.  Mrs J took him to our vet for an evaluation and the vet tech said he hadn’t had anything but grass and leaves to eat for a while. 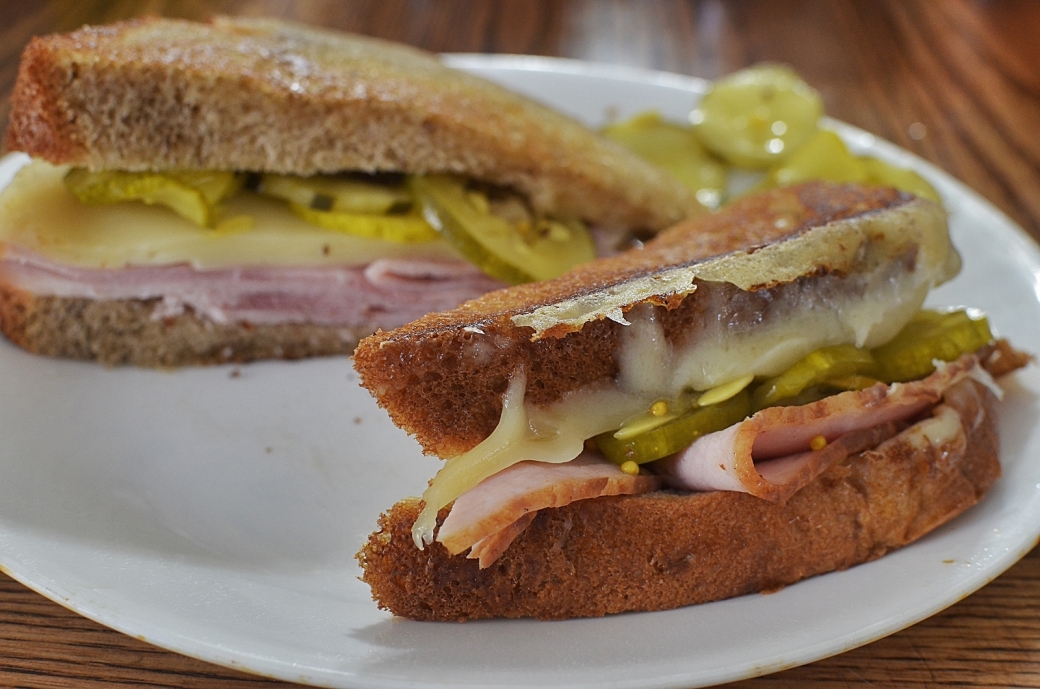 Here’s a ham and Swiss on rye, lightly grilled.  I have a nice beef top round brining in the basement and I wanted to try a couple of rye bread recipes in the machine.  This was a light rye with caraway seeds.  Should be perfect for the corned beef-to-be. 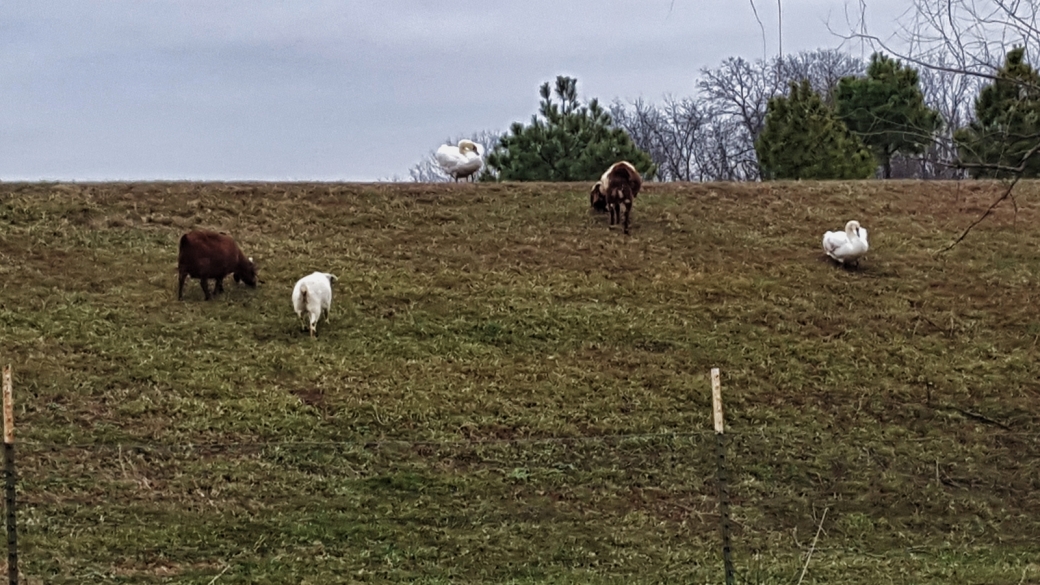 I mentioned in a post this spring that a neighbor bought a couple of swans they were going to raise along with the goats they’ve been keeping.  I was driving past their place when I looked out the window at the goats browsing on their pond dam and had to do a double take – those swans are nearly as big as the goats! 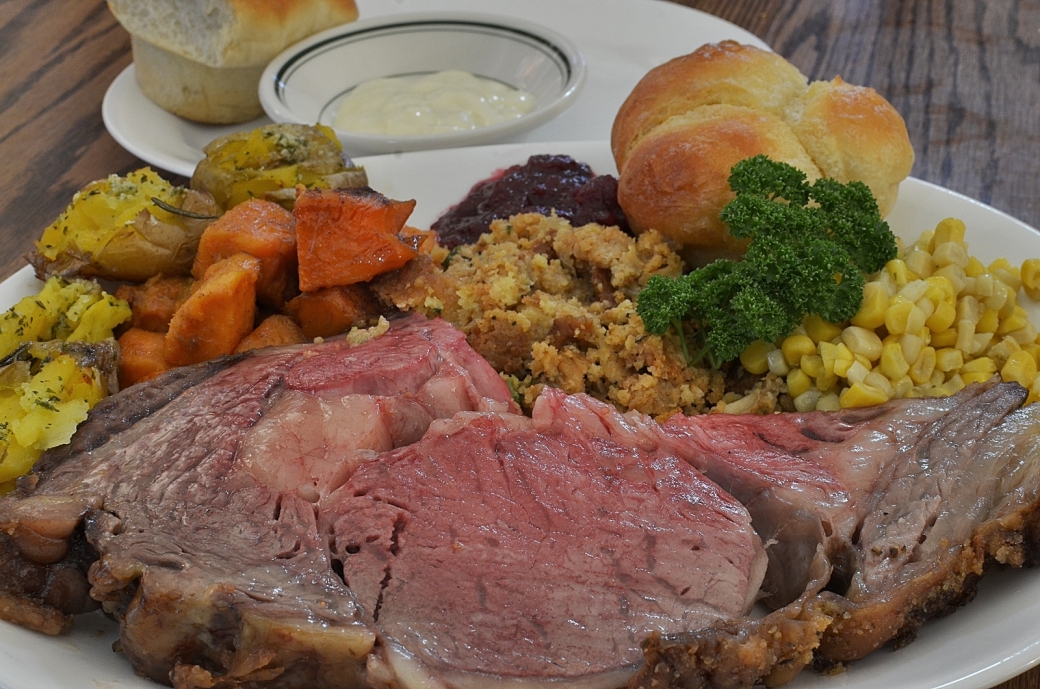 Here’s a different angle on that rib platter.  Mrs J is wishing we had bought another one to put back, this one was so good. 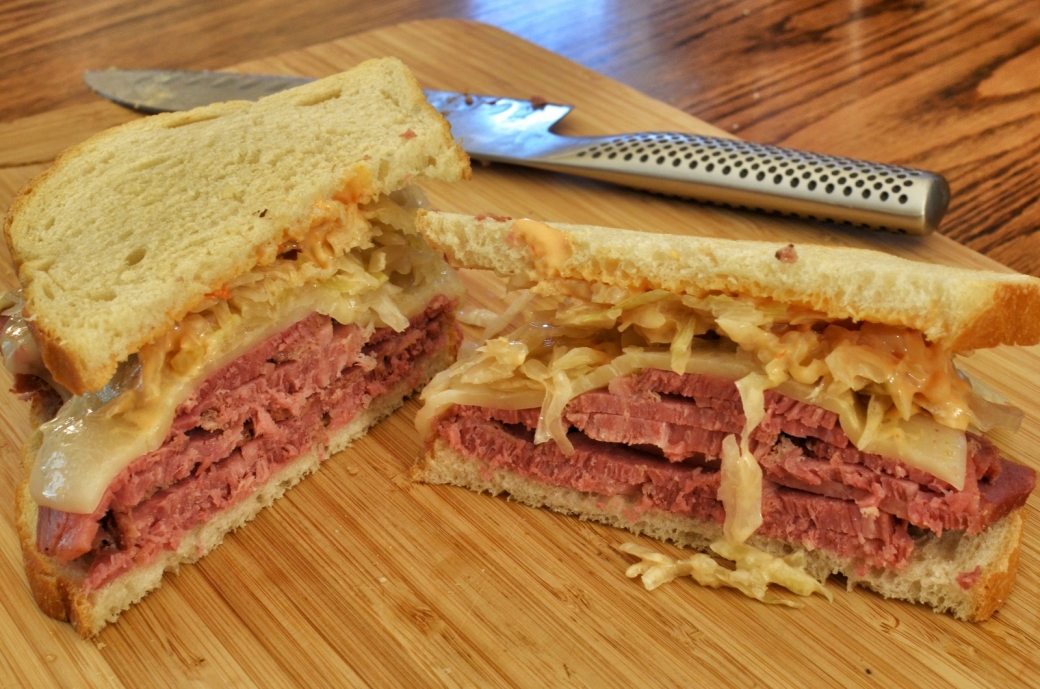 The local markets have been selling corned beef cheaper than hamburger lately.  I’ve been grabbing them every time we go shopping.  I like the traditional boiled dinner with cabbage and carrots but I think corned beef on rye is hard to top.  My only complaint is they always use brisket for these so the slabs of cooked meat are thin.